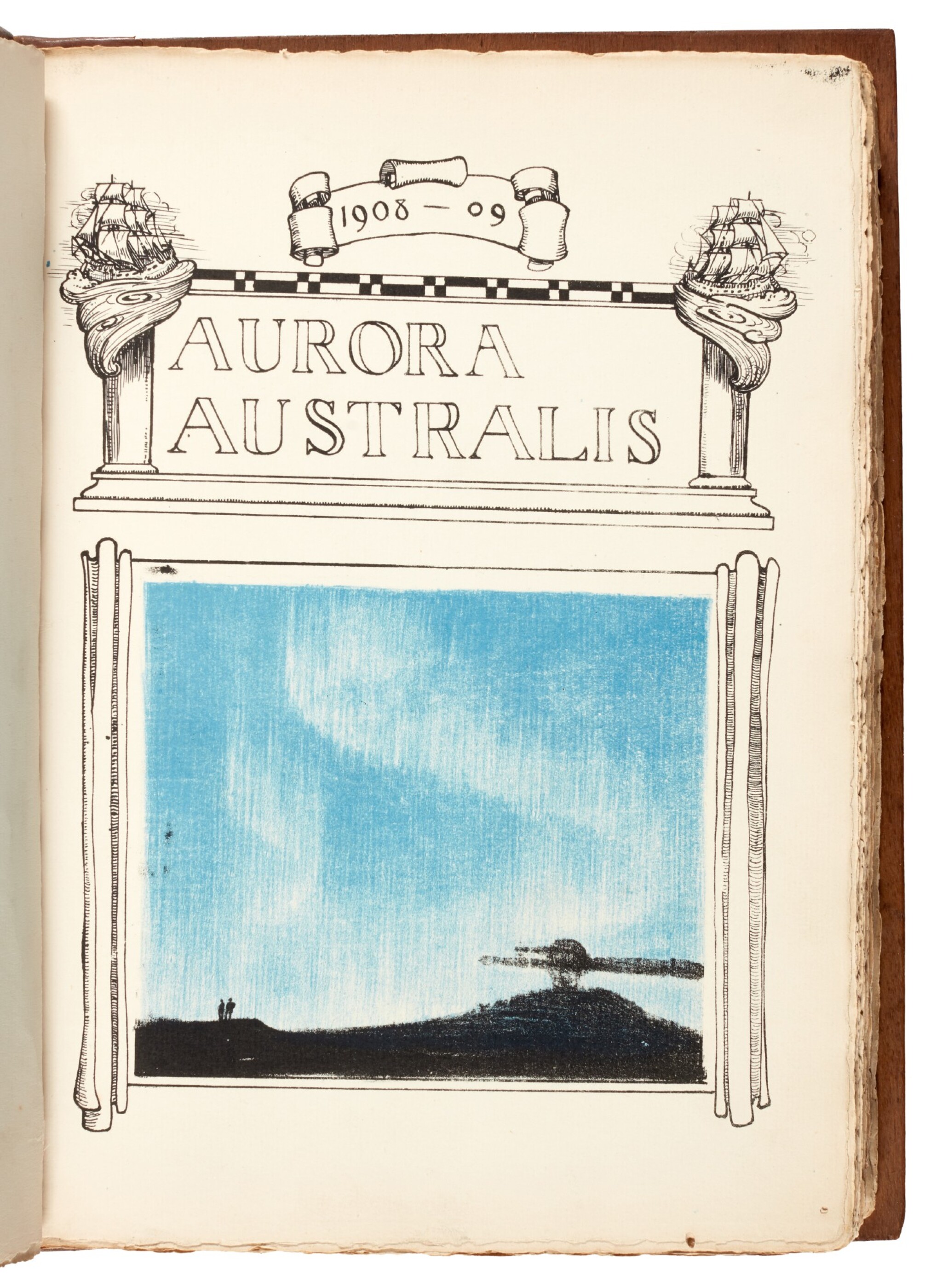 Aurora Australis. Antarctica: “Published at the Winter Quarters of the British Antarctic Expedition, 1907 During the Winter Months of April, May, June, July, 1908 Illustrated with lithographs and etchings; by George Marston. Printed at the Sign of 'The Penguins'; by Joyce and Wild. Latitude 77°.. 32' South Longitude 166°.. 12' East, (1908-09)

THE FIRST BOOK PRINTED AND BOUND IN ANTARCTICA. THIS COPY INSCRIBED BY FRANK WILD'S BROTHER LAURENCE TO HIS GRANDSON "To my grandson / Nicholas J. Fright / on his 21st. birthday / 31 December 1970. / To keep in memory of his Great-uncle / Frank Wild, who made this book in the / Antarctic. / With best wishes, / Laurence C. Wild."

“THE MOST RENOWNED TITLE IN THE ANTARCTIC CANON” (Taurus). The book is also a celebrated rarity. According to Murray and Marston’s Antarctic Days, at most 100 copies were produced, but Rosove notes that “approximately sixty-five copies have been accounted for to date", of which around half are located in institutional collections.

That such a beautiful book should be produced by amateurs, and under such testing conditions, is remarkable. Shackleton had previously edited the first volume of the the South Polar Times on Scott's Discovery expedtion prepared in a single copy in the Antarctic and later published in England in a limited edition.

Shackleton had previously been the editor of the South Polar Times, published in England to commemorate Scott's first expedition of 1901-1904. The success of this led to his shipping a press, type and paper with his Nimrod expedition of 1907-1909. During the Antarctic winter of 1908 Frank Wild and Ernest Joyce, who had received some training in England, acted as printers.

Murray and Marston describe one of the main stumbling-blocks of Antarctic printing: “It is too cold to keep the printer’s ink fluid; it gets sticky and freezes. To cope with this a candle was set burning underneath the plate on which the ink was. This was all right, but it made the ink too fluid, and the temperature had to be regulated by moving the candle about.”

Inscribed by Laurence Wild to his grandson Nicholas J. Fright on his 21st. birthday December 1970 "To keep in memory of his Great-uncle Frank Wild, who made this book in the Antarctic."

Sotheby's London, 22 June 1995, lot 188, to Antipodean Books, from whom acquired by the present owner