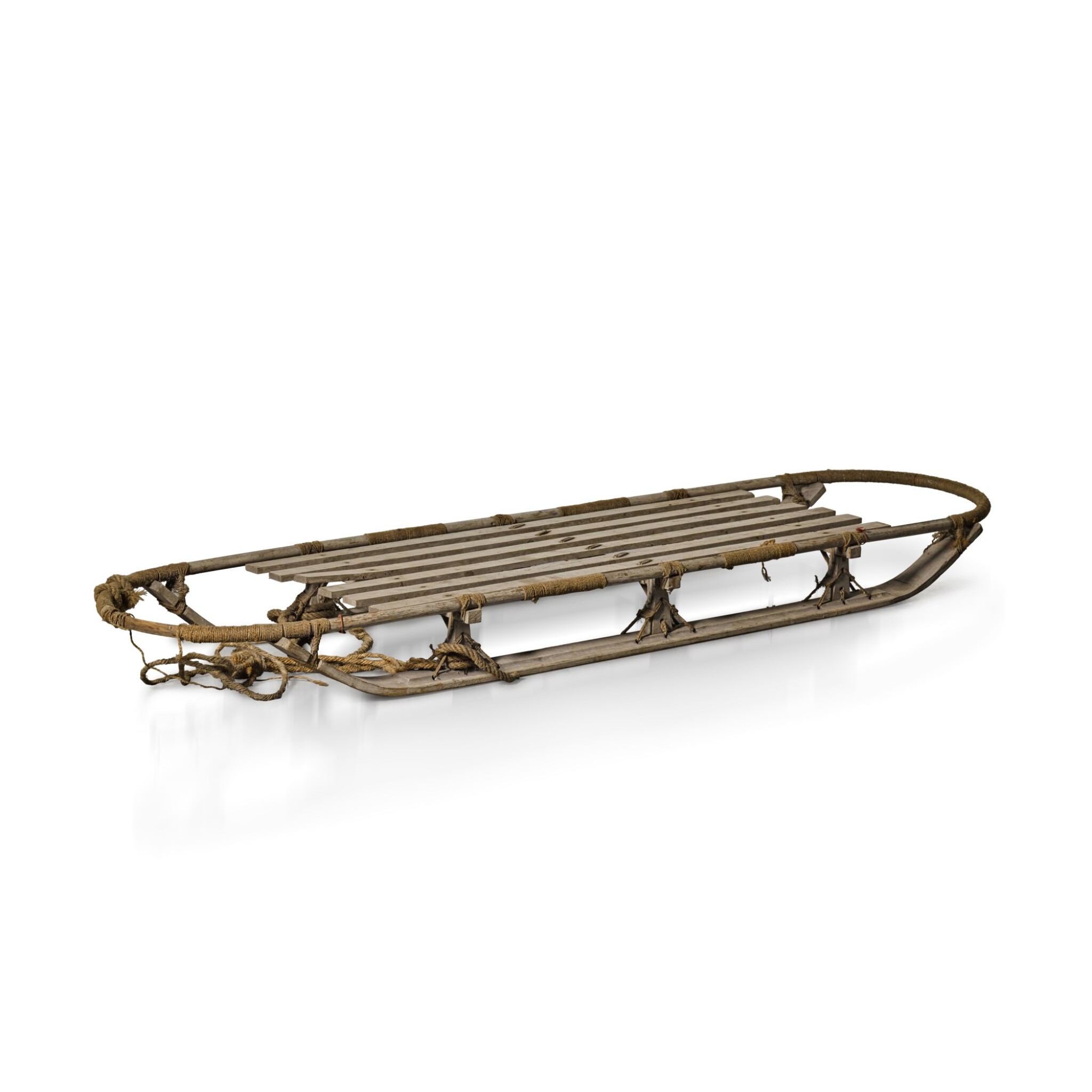 A RARE SLEDGE FROM THE MOST WELL-KNOWN EXPEDITION OF THE HEROIC AGE OF ANTARCTIC EXPLORATION.

This sledge is identical to the sledge owned by Francis Davies (1885-1952) who was the leading shipwright on the Terra Nova expedition, and which was displayed at the Spink exhibition "200 Years of Polar Exploration 1819-2019" (London, 18-24 November 2019) and illustrated in the accompanying catalogue with the following text:

"The Nansen Sledge, named after its inventor, Fridtjof Wedel-Jarlsberg Nansen, the renowned Norwegian explorer, scientist, humanitarian and Nobel Peace Prize Laureate, whose techniques of polar travel and his innovations in equipment and clothing influenced a generation of subsequent Arctic and Antarctic expeditions, and who had first come to the fore for his first crossing of the Greenland Ice-Cap in 1888. He invented the lightweight "Nansen sledge" with broad ski-like runners. A number of these sledges were used on the Terra Nova expedition." (200 Years of Polar Exploration, p. 130).

This style of sledge is based on a sledge Nansen designed in 1888 for his crossing of Greenland and was intended to be lightweight but strong enough to carry all of the necessary equipment and be hauled by six men.

The aim of the British Antarctic "Terra Nova" Expedition of 1910-1913, led by Captain Robert Falcon Scott, was to reach the South Pole and to carry out extensive exploration and scientific experiments including biology, geology, glaciology, meteorology, and geophysics along the coast of Victoria Land and on the Ross Ice Shelf. Scott competed against Roald Amundsen (see lot 104) to become the first person to reach the South Pole. Not only did Amundsen’s Norwegian team beat Scott to the South Pole, but beset by hardship, Scott and his South Pole party perished on their return journey.

This sledge was presented to John Fisher, 1st Baron Fisher, who was First Sea Lord 1904-10 and 1914-15. In 1886 Scott first came into contact with Admiral Fisher when he served on the Rover, of which Admiral Fisher was at that time commander, and Scott's last naval position was as an administrator in Sir John "Jacky" Fisher's Admiralty from March - December 1909, serving as Naval Assistant to the Second Sea Lord Admiral Sir F. Bridgeman.

"Though Fisher was not greatly 'in favour of [polar] expeditions'" he did not dismiss them entirely "Certainly it is not for the Admiralty to throw obstacles in the way of a fresh Expedition, if organized by private enterprise. But neither can it be expected to assist in pushing a fresh expedition on an apparently reluctant public" (Fisher 1907). However in Fisher's memoirs of 1919 he wrote "There are statues of Franklin and of Robert Falconer [sic] Scott in Waterloo Place; but neither of these displayed his heroism in naval action. They were each peaceable seekers - but what on earth good accrues from going to the North and South Poles I never could understand - no one is going there when they can go to Monte Carlo!" (Fisher 1919: 163n). Though Huntford [Roland Hunter, Scott and Amundsen (1979)] seems to think this passage indicates scorn for Scott and polar exploration, Fisher clearly states here that Scott displayed heroism." (Lewis and May, p. 111).

Damage to front section of frame, a few wormholes, repairs with metal staples, some rope frayed