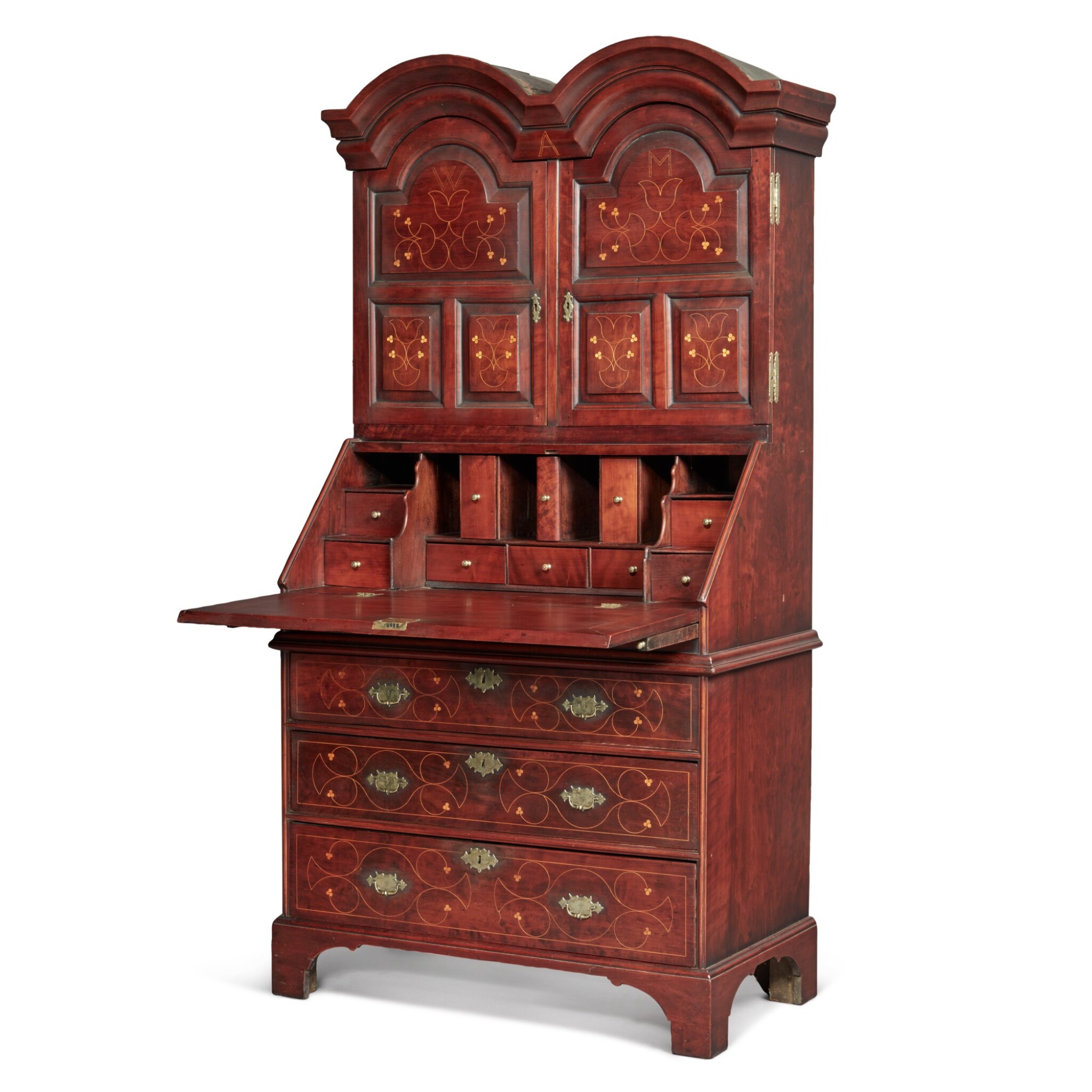 Secondary woods: white pine, Atlantic white cedar, chestnut, and poplar. Feet replaced. Lid replaced. mid-waist molding replace. Pre-conservation photographs available from department. Brass hardware appear period but not original. Repairs around hinges of interior lid. The first drawer with replaced drawer stoppers and replaced side runners, the second drawer with a small break to the back of the drawer. First drawer proper left side with break to back of runner, Second and third drawers are lacking runners causing the drawers to sag. Shrinkage crack to proper right side of case.

This early double dome-top desk-and-bookcase was Bill DuPont’s favorite piece of line and berry furniture. It was made in the Nottingham area of Chester County, Pennsylvania. The initials “W” and “M” within the arched panels identify the original owner, likely William Montgomery (1665/6-1742), a Scots-Irish Presbyterian who emigrated to America in 1722 and settled in northern Delaware.1 The initial “A” was added later and may correspond to his son, Alexander Montgomery (d. 1747), who inherited the piece. He married Mary McCullough (d. 1747) and this desk descended to their son, William (1736-1816), at their death in 1747. A young boy when his parents died, William was placed under the guardianship of Evan Rice, who was a neighbor and fellow member of the White Clay Creek Presbyterian Church. He later moved to Northumberland County in 1777 and helped found the town of Danville, where he lived for the rest of his life. He served as colonel of the 4th, or “Elk,” Battalion during the American Revolution and was later promoted to major general. He was also a U.S. representative, state senator, judge and land surveyor. After his death in 1816, William Montgomery specified in his will that “the Clock, Desk and Bookcase and the parlour cupboard shall continue annexed to the house.”2 The house and this desk were inherited by his son, Alexander Montgomery (1777-1848); they descended through two more generations of his family to Hannah M. Russel, who was the last descendant to live in the house in the early 1900s.

This desk-and-bookcase is the only complete example of its form with line and berry inlay that survives. It is unusual for being made of cherry rather than walnut and constructed in one piece rather than as a two-part form which was more typical. The inlay displays distinctive features associated with a group of furniture made in the Nottingham area of Chester County.3 These include the use of two-petal tulip motifs, three tightly clustered berries, and initials formed with double lines. Several other pieces in the group have single or double light and dark diagonal banding. The group is comprised of spice boxes, a small lidded box, three slant-front desks, a tall-case clock, and a high chest of drawers.4 The latter piece was likely owned by Jeremiah Gatchell (1743-1802) and probably made by Hugh Alexander (1724-1777), a Scots-Irish Presbyterian carpenter and wheelwright working in Nottingham. It was formerly in the collection of Bill DuPont and recently given to Winterthur Museum.5 A spice box in this group with a history in the Hartshorn family is attributed to Thomas Coulson (1703-1763) and possibly his son, John Coulson (1737-1812) of Nottingham. One of the slant-front desks is still owned by the family of Hugh Alexander. Family tradition notes that it was made by Hugh for his brother, James in 1757.

Soon after Bill du Pont acquired this desk and bookcase, he wrote to Wendy Cooper to offer it for the upcoming Paint, Pattern & People: Furniture of Southeastern Pennsylvania, 1725-1850 exhibition at Winterthur. He had already planned to loan the line and berry high chest mentioned above that was owned by Jeremiah Gatchell and made by Hugh Alexander. In his letter excerpted here and dated Independence Day July 4, 2010, he wrote of his two prized pieces: “Dear Wendy, it is said that lightning never strikes twice in the same place. Lately, I have begun to rethink that concept. In 1991, after twenty-seven years of study and searching, I discovered and acquired Mr. Joseph Terrell’s startling heirloom – his Southeast Pennsylvania Queen Anne Highboy, fully decorated with line and berry inlay and the original owner’s initials. It is known to be made by Hugh Alexander of Nottingham. Nineteen years of research, since then, have failed to find a comparable piece at Winterthur, at any other museum or historical society, in any private collection, or even as a printed illustration. A growing number of experienced antiquarians have discovered this piece and it has been referred to as ‘unique,’ ‘superb,’ and the ‘greatest example of its type.’ The most important survivor yet found, etc. etc. I consider myself privileged to own it.

Lightning struck a second time when I acquired a Southeast Pennsylvania double dome top secretary desk and book case, also fully decorated with line and berry inlay and the original owner’s initials. Bearing the initials W. M. for William Montgomery, the original owner, and purchased from an attorney of the same name, the secretary is said to have descended in his family for many generations. He has provided some family history and a promise of more to come. There are at least two books in print dealing with the Montgomery family history and genealogy, one of which arrived this morning. When I first learned the name of the secretary’s first owner, I suspected we would be in for a treat, as I once knew a member of this ancient and distinguished family. The secretary desk is, to me, the only provincial Pennsylvania piece that can rival in beauty, rarity, and importance of the inlaid Alexander highboy. Seeing both pieces together gives me a thrill! Another nineteen years of study and searching has produced the ultimate result, the ‘Kentucky Derby and the Belmont Stakes,’ ‘A Grand Slam,’ ‘The perfect duet.’ These were the comments spoken by the first few knowledgeable observers. Each form represents the most dramatic and impressive domestic object that could have existed during its time period in Southeast Pennsylvania. Both are unique and unknown and unseen! I am determined that these two pieces be appropriately introduced to their interested and appreciative audience. They represent the zenith of my collecting endeavor.

When I focus on these two titans, I am struck by their excellence, regardless of the relatively humble circumstances of their birth. No downtown Philadelphia conditions, with regular meetings of the Carpenter’s Company exchanging ideas and templates. Instead, likely simple interactions between our able, provincial craftsman and his somewhat ambitious rural client, both hoping to reach beyond the ordinary and succeeding.”