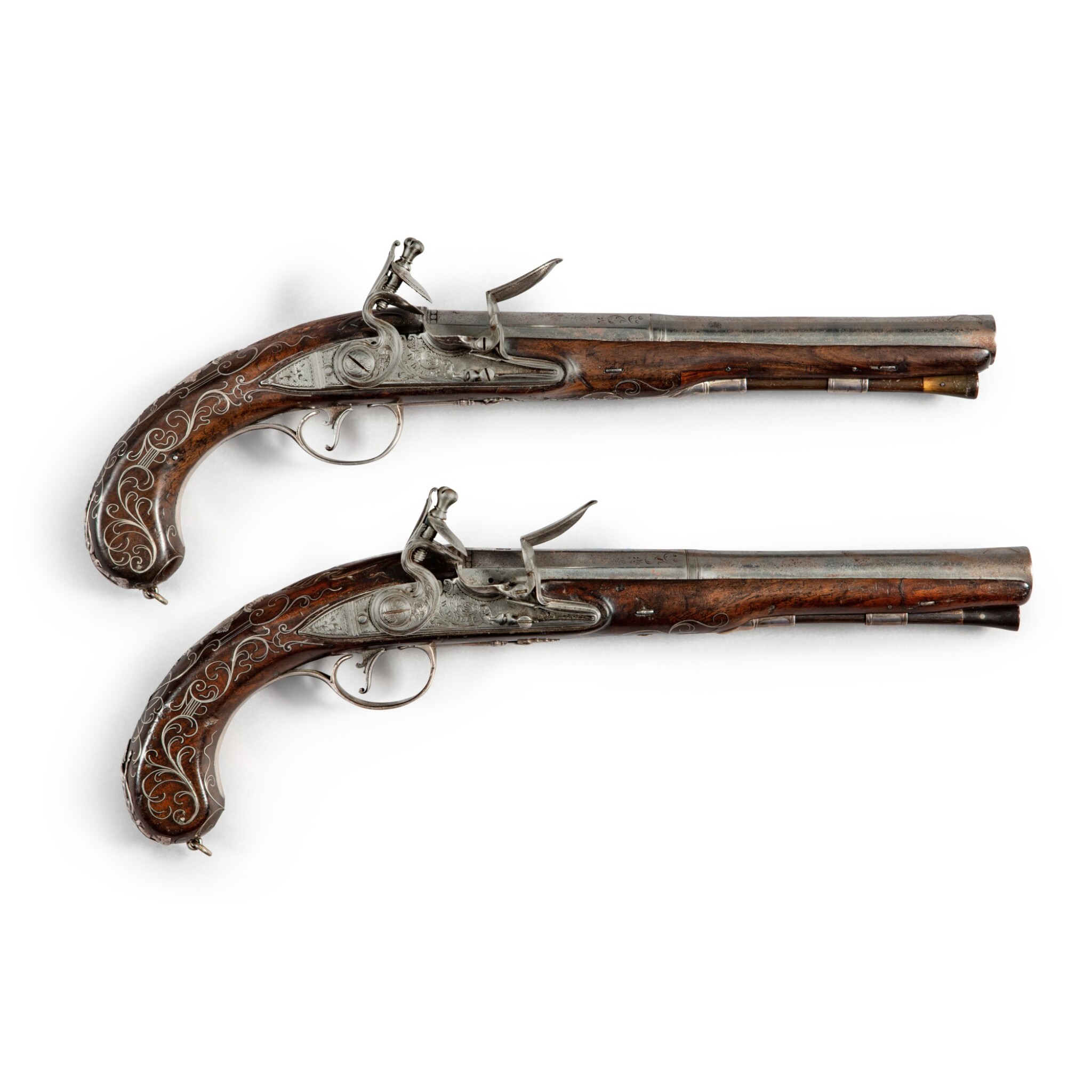 A Pair of Silver-Mounted and Inlaid Walnut Flintlock Pistols

Locks signed W. Bailes and tops of barrels signed W. Bailes, London, the barrels with proof and view marks and gold lion rampant mark, the silver hallmarked London 1760, maker’s mark J or T.A.With two-stage smooth bore barrels, gilt spider front sights, two-color horn ramrods, the walnut carved with shells behind the tangs and inlaid with silver wire scrollwork, the silver wrist escutcheons engraved with the Montgomerie crest- a female figure anciently attired holding in the dexter hand an anchor and in the sinister a severed head enclosed by a helmet and crossed sword and cannon, the butts applied with a silver figure of Britannia with shield and laurel-wrapped globe, all above a silver lanyard ring.

Both pistols are complete with their original horn ramrods with horn tips of a different hue. Pistols are in very good overall condition, steel surfaces polished bright with some wear to barrels and some light freckling. Locks are in original flintlock configuration and have crisp engraving.

Minor bruises throughout, wear to high spots, minor losses to silver wirework, partial crack in one base spreading from lockplate, same gun has two small patches either side of the rear mount of ramrod.

These pistols, engraved with the Mongtomerie crest, almost certainly belonged to the 11th Earl of Eglinton, Archibald Montgomerie (1726-1796). The crest is without coronet which he would acquire on inheriting the title upon the death of his father in 1769. Montgomerie was a Scottish General and member of British Parliament, who was Chief of the Clan Montgomerie and procured several victories for the British in the French and Indian War. At the outbreak of the Seven Year’s War, Lieutenant-Colonel Montgomerie had raised the 62nd Regiment of Foot in Stirling, Scotland, in 1757, which was later renamed the 77th Regiment of Foot (Montgomerie’s Highlanders) when the troop was transported to North America in 1758. Shortly thereafter, Montgomerie was put under the command of General Amherst and the regiment participated in the capture of Fort Duquesne alongside Colonels George Washington and Henry Bouquet. Montgomerie defeated the Cherokees at the Battle of Echoee in 1760; the same year these pistols are hallmarked. He later fought in the Battle of Havana in 1762 and the Battle of Bushy Run in 1763. He continued to rise in British military rank, serving as Colonel of the 51st Regiment of Foot in the French Revolutionary War, as Major General in 1772, as Lieutenant General in 1777, and finally as General in 1793.

Before inheriting the Earldom of Eglinton in 1769, he served as a Whig MP for Ayrshire from 1761 to 1768, as Governor of Edinburgh Castle in 1782-96 and as Lord Lieutenant of Ayrshire in 1794-96. Several portraits were created of Archibald Montgomerie throughout his life, including caricature engravings, drawings, miniature portraits on ivory and oil paintings. The most iconic portrait of the 11th Earl of Eglington wearing a plumed bonnet was painted by Sir Joshua Reynolds in 1784, now in the Royal Collection. He was also a patron of Scotland’s favorite poet, Robert Burns. For more information on Archibald Montgomerie, see Henry Manners Chichester, "Montgomerie, Archibald (1726-1796)". Sidney Lee (ed.) Dictionary of National Biography, (London: Smith, Elder & Co., 1894), vol. 38, no. 302.

A flintlock double-barreled shotgun by W. Bailes, 1764-5, is in the collection of the Royal Armouries, Leeds, no. XII.4669, with silver mounts by the same goldsmith, lent to the Victoria & Albert Museum Rococo Exhibition 1984, cat. no. 17