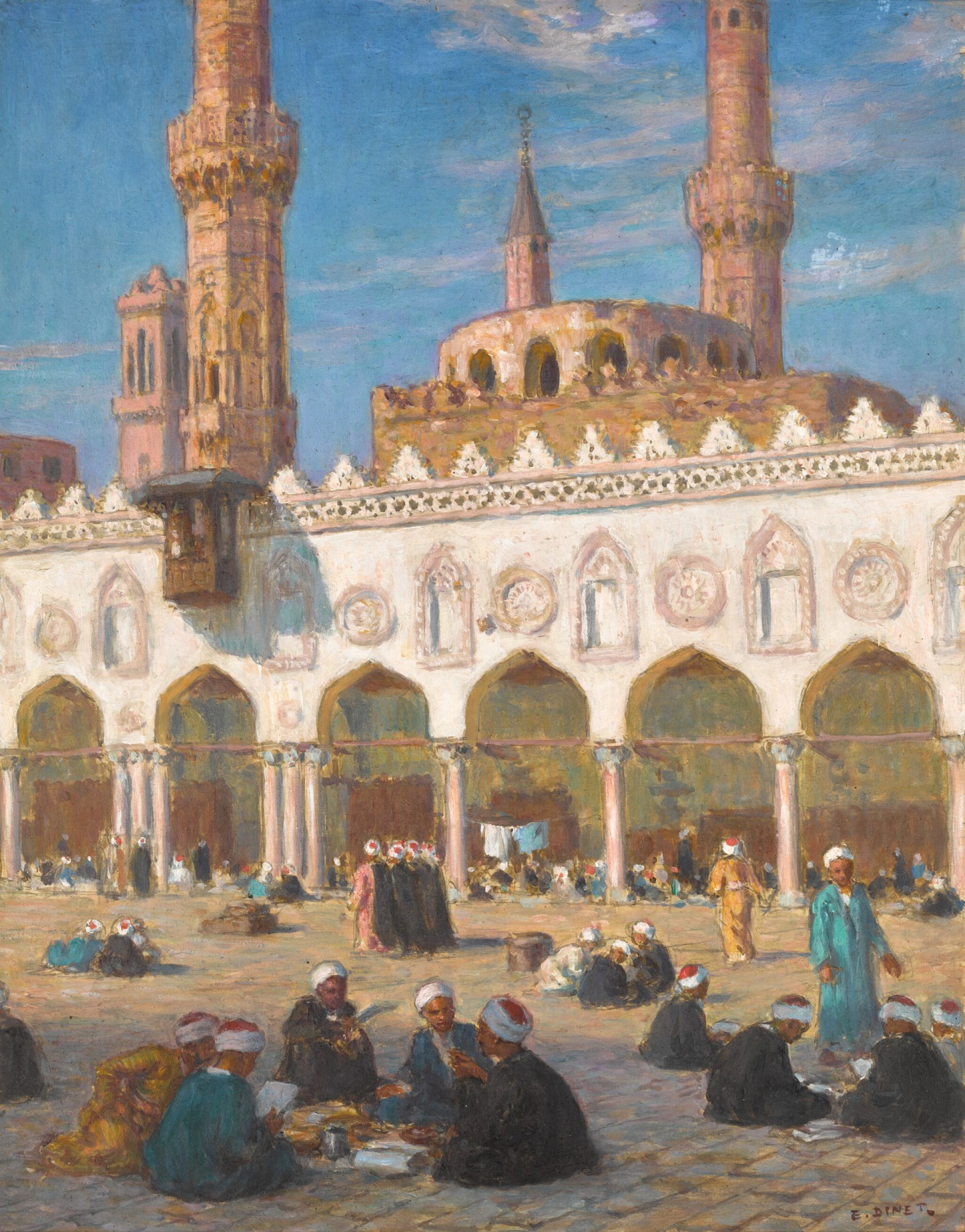 The work is in good condition some minor surface dirt, otherwise ready to hang.

Etienne Dinet & Sliman ben Ibrahim, La vie de Mahomet, prophète d'Allah, Paris, 1918, p. 161, illustrated
Denise Brahimi & Koudir Benchikou, La vie et l'oeuvre de Etienne Dinet, Paris, 1984, p. 257, no. 420, illustrated (as Élèves théologiens dans la cour de l'université de El Azhar au Caire)
Paris, Société Nationale des Beaux-Arts, 1914
Paris, Palais Galliera, Foire du Livre, 1918
Paris, Exposition Coloniale, Rétrospective Etienne Dinet, 1931
The present work depicts a number of theological students, reading, conversing and walking in the sunny courtyard of Al-Azhar madrasa (with the towers and minarets of the Al-Azhar Mosque visible). Al-Azhar is one of the oldest and most revered universities in the Islamic world. The university was founded in 970 or 972 by the Fatimid Caliphate as a centre of Islamic learning. The Qur'an and Islamic law were studied in detail along with other subjects such as logic and grammar. Today it is one of the most prestigious centres of Arabic literature and Islamic learning and has a notable library. Ludwig Deutsch also painted the courtyard of the university (although from a different viewpoint) in his Salon entry of 1890, now in the collection of the Sharjah Art Museum.

Dinet was interested in depicting children and teenagers at play or at study, and after he converted to Islam in 1913, his works also focused on religious themes. In 1918, he published a book made in collaboration with his friend Sliman ben Ibrahim, titled The Life of Mohammad, the Prophet of Allah. The present work is one of the illustrations, as well as an interior of a village school in Dinet’s beloved Algeria, depicting five young boys attending a writing lesson. Dinet, who spoke Arabic fluently and settled permanently in North Africa, worked in partnership with ben Ibrahim on a total of eight books.

Frédéric Lung, the first owner of this work, was a businessman, wine merchant, philanthropist and patron of the arts in Algeria. He owned paintings by Henri Matisse, Paul Gauguin, Charles Dufresne and other works by Dinet such as The Koranic School, which was exhibited at the Salon des Artistes Algériens et Orientalistes in 1913 and L'Andalousie au temps des Maures painted circa 1900. His widow bequeathed a large number of paintings to the National Museum of Modern Art in Paris in 1961.