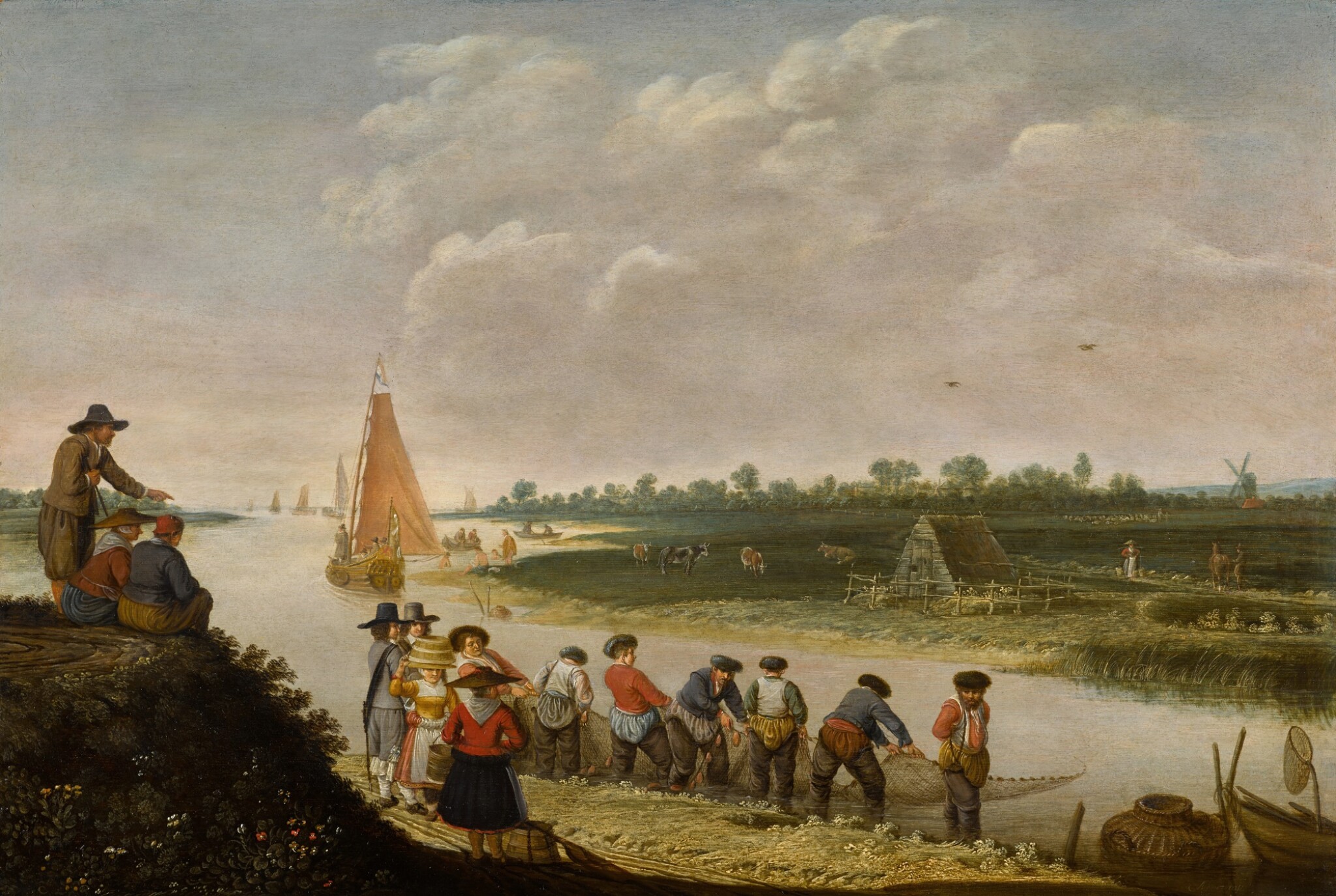 The following condition report is provided by K&S Conservation Ltd. who are external specialists and not employees of Sotheby's:

The painting is assumed to be painted in oil on an oak panel. It is overall in sound condition. The panel consists of two boards, both arranged with the grain-direction running horizontal. The panel has been thinned and is now cradled (seven fixed horizontal members of varying width and placed closer together at the center, as well as seven vertical movable ones. At the center there is an insert running the width of the panel. This is non-original and visible only from the edge. At the back, the cradle members are applied tighter across this area. The paint and ground layers are stable, with no signs of flaking or recent losses. There are no losses as such to the paint layers, other than the area of the insert. However, there is some wear to the painting especially to the sky. The painting has recently been restored. The surface gloss is even and saturating.

Private Collection, Germany, December 1923 (according to Welcker 1979 below);

S. Thomas, in A Feast for the Eyes, European Masterpieces from the Grasset Collection, exh. cat. Saint Petersburg, Florida, 2019, pp. 24, 94, no. 6, reproduced in colour.

San Diego, The San Diego Museum of Art, Brueghel to Canaletto, European Masterpieces from the Grasset Collection, 2 April – 2 August 2016, no. 14;

Saint Petersburg, Florida, Museum of Fine Arts, A Feast for the Eyes, European Masterpieces from the Grasset Collection, 23 March – 2 September 2019, no. 6.

This is one of the finest of a closely related group of summer landscapes that Avercamp painted depicting fishermen at work on the banks of a river. They are typically composed as here around a low horizon line, with teams of fishermen hauling in their nets on a riverbank in the immediate foreground, watched by one or more wealthier burghers and other countryfolk. With their weaving diagonal recession and play of light and shadow across the water and fields beyond they display a real sensitivity for the Dutch landscape.

The paintings most closely comparable to the present work are the two signed panels sold Paris, Christie’s, 21 June 2011, lot 14, and 18 May 2022, lot 211, where in both cases trees replace the figures on a knoll shown here in the left foreground.1 The first of these is similar to a drawing of fishermen by Avercamp’s uncle Hendrick, today preserved in the Fondation Custodia Frits Lugt in Paris, which Barent may perhaps have known.2 Another similar panel, now in the Manchester City Art Gallery, which is signed and dated 1650, adopts an ever lower viewpoint upon the shoreline itself.3

The riverbank depicted here may perhaps be a stretch of the river Ijsel near Avercamp’s home town of Kampen, but any possible landmarks are absent. Seemingly the only such view with an identifiable topography is the much wider unpublished panel in the Stedelijk Museum in Kampen, which shows fishermen on the banks of the river Ijsel with a view of Kampen beyond, and which is also dated to 1650.4 Meijer (see Literature) suggests a date of around 1660 for the present panel on grounds of style and costume.

The provenance for the present panel was confused by Müllenmeister with that of a smaller picture formerly with Goudstikker in 1919 and later in the H.E. ten Kate collection.5 However this, together with another smaller panel of 1654 formerly in the Wetzlar collection in Amsterdam,6 is composed in the reverse direction.