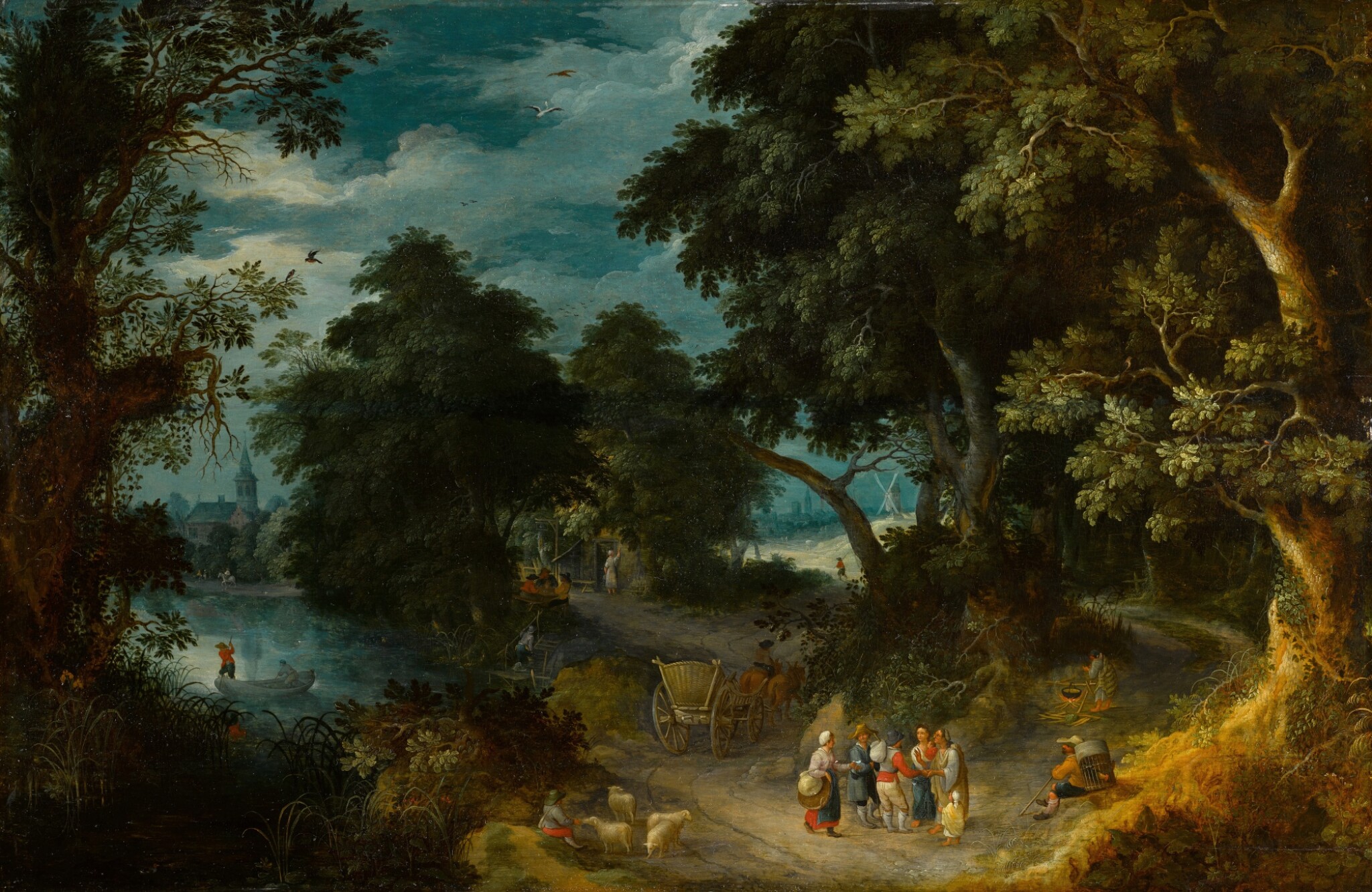 The oak panel is well preserved and is flat and stable; there is a serviceable cradle to the reverse. This has been applied to consolidate and reinforce two horizontal fractures, one central and one 10cm up from the bottom edge. Both bear discoloured restoration to mitigate previous minor paint loss. A small 12cm repaired horizontal hairline fracture can be detected to the lower right corner. The paint layer is well preserved and the paint texture, particularly through the tree foliage is in a very good original condition. Natural thinness to the paint layer in the sky has been augmented and very minor loss, recently addressed, is visible under U-V light along with a discoloured and degraded varnish. The removal of the varnish would improve the overall tonality and chromatic integrity of the image. Many fine details are intact. It bears Brueghel signature lower right corner.

Saint Petersburg, Florida, Museum of Fine Arts, A Feast for the Eyes, European Masterpieces from the Grasset Collection, 23 March – 2 September 2019, no. 19.

This well-preserved forest landscape is a characteristic example of Abraham Govaerts' mature style, combining his interest in depictions of provincial life and native countryside. Small groups of figures form clusters of colour dotted throughout the composition, skillfully drawing the viewer deeper into the verdant landscape populated by a variety of birds and animals.

In the foreground, a group of peasants are gathered around a fortune-teller. Behind them, along the winding path is a horse drawn cart from which the figures might have alighted, and to the right, a woman tends to a cooking pot over a campfire. In the centre background, a man is ascending a jetty, possibly intending to join a group of men that are seated around a table under a shady tree. To the left, two men are punting across a pond. Through clearings in the background, the artist depicts to the right the spires of a distant town and to the left a church. This work is a celebration of rural life in Flanders, inviting the viewer to muse upon the charms of country life beyond the walls of crowded cities.

The majority of Govaerts' works were painted during the Twelve Years' Truce (1609–21), a ceasefire during the Eight Years' War between the Dutch Republic and Spain, which ultimately led to its recognition as an independent sovereign nation by other European States.1 During this period, Govaerts pioneered the genre of forest landscape introduced by Jan Brueghel the Elder and Gillis van Coninxloo, specialising in late summer luxuriant landscapes which often include a diminutive historical, mythological or biblical subject, or a hunting scene.

Govaerts repeated this exact composition in two other instances, one from the collection of the Marquis of Gouvion-Saint-Cyr, with Galerie Fievez, Brussels by April 1930 (presumably the prototype), and the other with Galerie de Jonckheere, Brussels by October 1999.2 These versions are almost identical, differing slightly in the contour of the trees and dirt tracks left by the horse-drawn cart. Another smaller version, sold at Dorotheum on 12 October 2011, repeats the arrangement of the landscape but differs significantly in the staffage.3 Although the figures in Govaerts' landscapes were often the result of collaboration with other painters, such as Frans Francken and Hendrick van Balen, the staffage here is probably by his own hand.