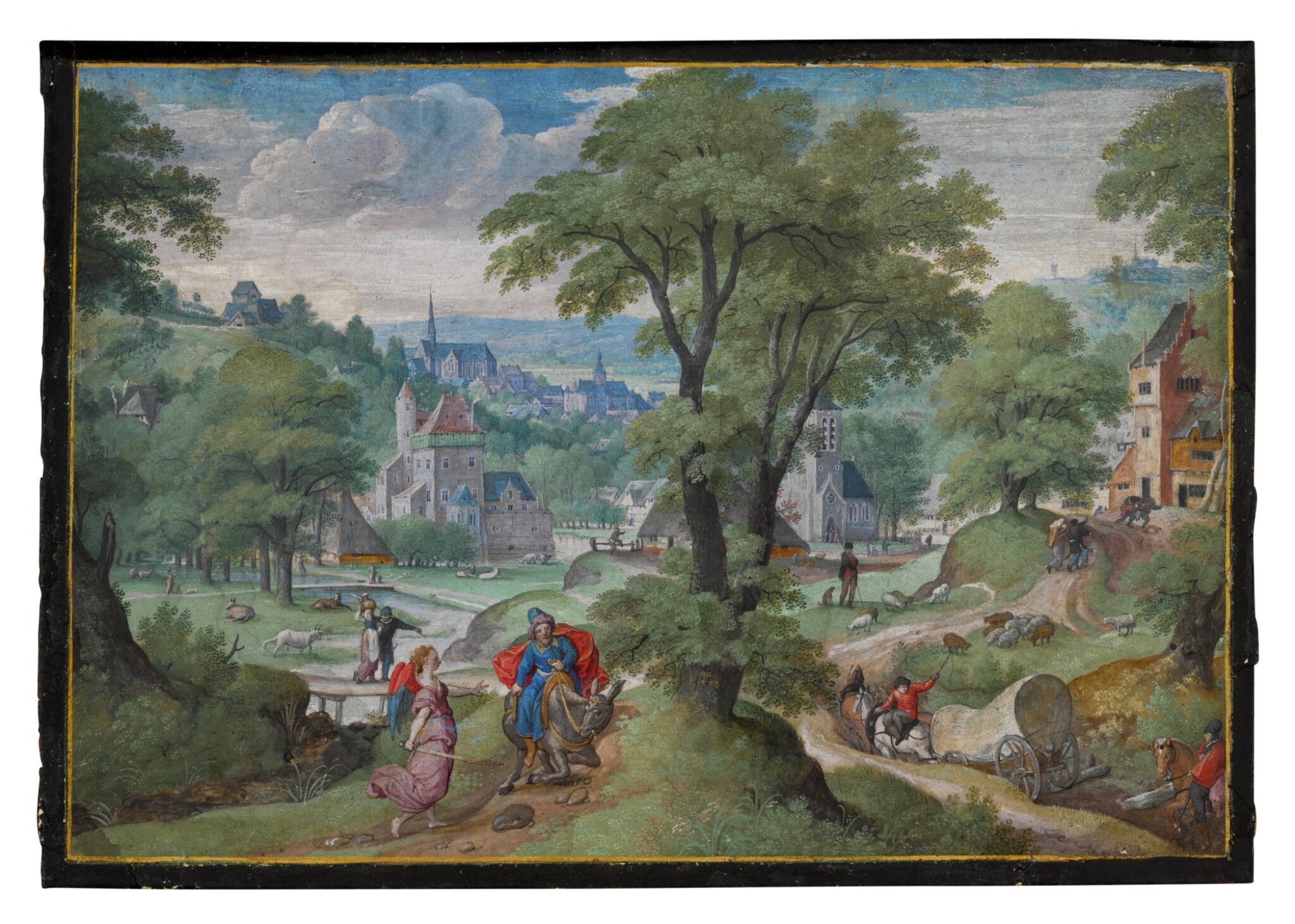 Gouache, heightened with gold, on vellum laid down on panel;

signed and dated in gold, on the trunk of the central tree: HBol 1583

bears old numbering on the panel, verso: No 28

and an old inventory number on a label: 268

A sheet of vellum has been laid down to an old panel backing. The borders of the sheet are covered by a black border which, judging by its age, is likely to be original. There are some small losses of gouache to the extremities and upper right corner and a small water stain to the lower left quarter. The work remains in otherwise very good condition. Sold in a modern faux tortoiseshell frame.

Bol's spectacularly elegant and beautiful landscape gouaches, often extensively heightened with gold, include some of the greatest achievements of late 16th-century landscape painting.  Combining elements and qualities from earlier traditions of manuscript illumination with an observational clarity that owes much to Pieter Breugel, Bol was a unique artistic personality. Many of his gouaches are, like this, executed on vellum, laid down on panel, and were probably conceived as 'cabinet miniatures,' to be kept and displayed in a wunderkamer.

Most, though not all, of the artist’s compositions of this type incorporate a biblical subject, but totally subordinated to the landscape; the religious theme is effectively just an excuse for the creation of an image that is first and foremost a spectacular and beautiful landscape, combining elements from the real world, and real locations, into a visionary, idealised scene.

In this very well preserved work, Bol illustrates the episode from the Book of Numbers (22:22-28), when the Lord sends an angel to intercept Balaam, who is on his way to curse the Israelites, but initially only the ass on which Balaam rides can see the angel. The artist had previously depicted the same subject, but in a somewhat different landscape, in the seventh plate out of the series of 30 that constitute the Libellos Varios Regionum Tractus Continens, published by Philips Galle in Antwerp in 1574. Further gouaches by Bol incorporating Balaam and his ass are in Munich (dated 1586),1 and in an American private collection (dated 1578 or 1579).

We are most grateful to Stefaan Hautekeete for his kind help while cataloguing this lot.