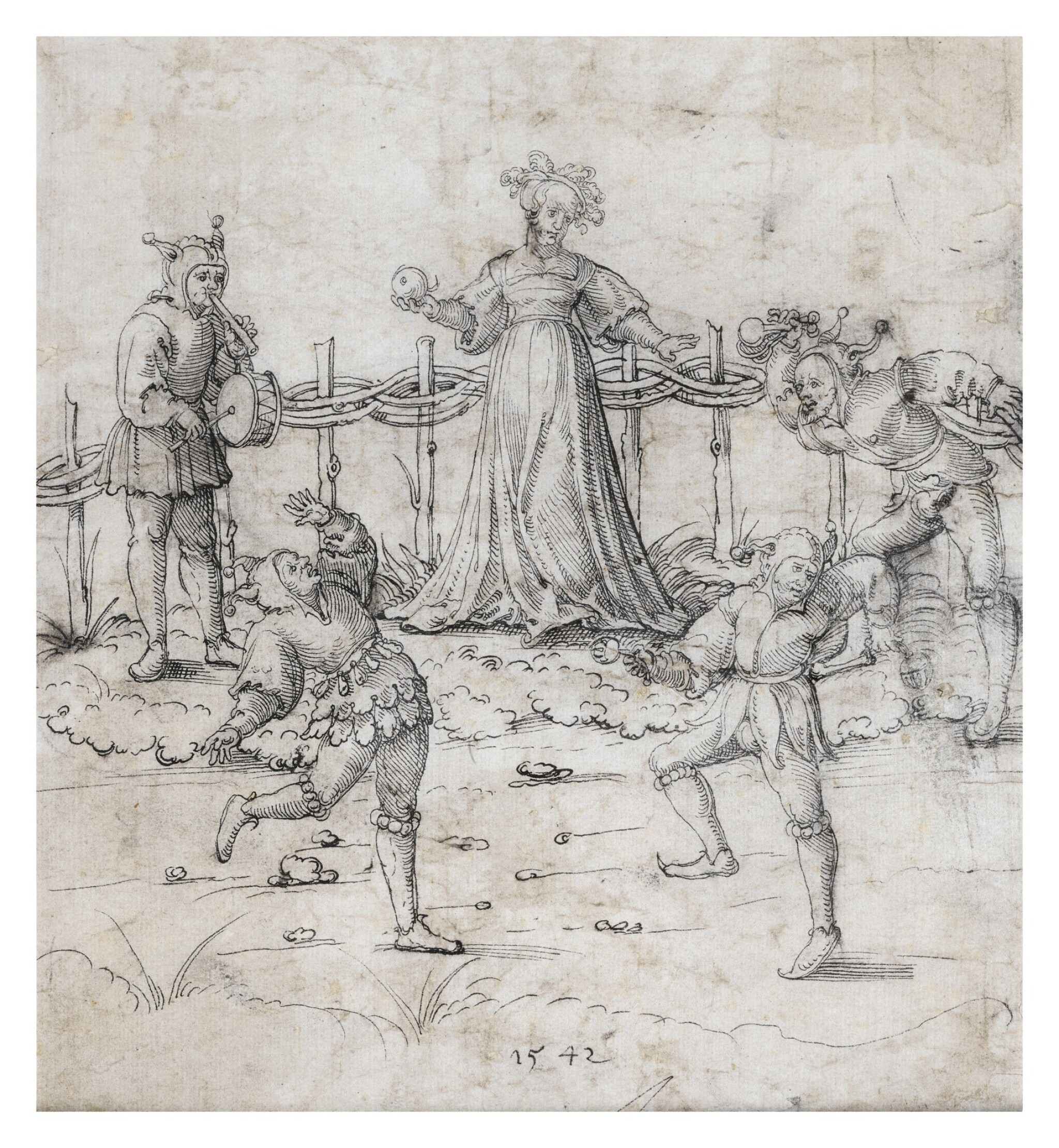 Pen and black ink over traces of black chalk;

dated in black ink, lower centre: 1542 and signed with the artist's mark below;

Hinge mounted to a modern cream mount. There is evidence of surface dirt to the sheet and some old creases to the extremities. The pen and ink media remains in very fine condition throughout with the image strong. Sold unframed.

This humorous and inventive drawing, which was previously unknown, joins a corpus of some fifty known sheets by Erhard Schön, who was one of the most significant and prolific printmakers working in Nuremberg in the first decades of the 16th century.

Though the influence of Dürer was all pervasive in his native city, Schön does not himself seem to have studied with the master. After Dürer’s death, and before Virgil Solis and Jost Amman became fully active, Schön was Nuremberg’s key printmaker and designer of book illustrations, producing some 1,200 illustrations for 116 different publications, and another two hundred single leaf woodcuts. Only Sebald Beham, the slightly younger Nuremberg-born artist who established himself in Frankfurt, was anywhere near as ubiquitous as an illustrator among the artists of the generation immediately following Dürer.

Schön’s surviving drawings are varied in terms of style, function and subject-matter, including studies for woodcuts, chiaroscuro compositions that were presumably made as finished works, and sheets such as this one, which are comparable in format and subject to the artist’s prints, but not apparently directly related to any that were actually executed.  There is no full catalogue of the drawings of Schön, but Alison Stewart published a provisional checklist in her 1988 article presenting some previously unknown drawings by the artist.1 The pen drawings like this are in some ways similar in style to those of Beham, but seem also to demonstrate an awareness of drawings of earlier masters as varied as Dürer, Urs Graf and Albrecht Altdorfer. They are characterized by their distinctive facial types, precise yet individualized poses and outlines, rather stylized treatment of foliage and landscape elements (where the echoes of Altdorfer are especially evident), and sometimes eccentric subject matter. They are also very often signed with the artist’s subtle mark, a narrow, open-ended triangle or V-shape, with the point inclined to the top right, which can very easily be mistaken for a feature of the foreground topography, but once spotted is immediately identifiable. In the present drawing, the mark, partially cut, is at the bottom of the sheet, a little to the right of the date. Other stylistically similar – and similarly signed – works include a 1540 representation of Apollo and Daphne, in Erlangen,2 and a somewhat earlier Venus and Cupid, in Berlin.3

The rather unusual subject of this highly individual drawing, a group of jesters or fools dancing wildly in front of a slightly bemused looking woman who holds an apple, remains something of a mystery, but reflects more than one recurring theme in German art of this period. As Dr. Joseph Koerner has kindly suggested, it may illustrate a specific passage from one of the satirical poems of Hans Sachs (1494-1576), whose works Schön illustrated on a number of occasions, but in any case, the theme of men making fools of themselves when faced with a woman was much illustrated. Here, rather wonderfully, Schön shows his siren holding an apple, at a stroke turning his central figure into a bizarre reincarnation of Eve in the Garden of Eden, and his whole composition into a grotesque parody of The Judgement of Paris.

Another drawing by Schön with a subject incorporating a fool is his 1527 Fool and Knight Jousting on Horseback, in Frankfurt4; and compositionally, as Koerner has again kindly pointed out, a woodcut composition by Schön is also in some ways related: his Seven Wives Complaining about their Husbands, which illustrates a text by Sachs, shows the protagonists in a very similar outdoor setting, before an almost identical wooden fence.

While certain aspects of this eccentric but appealing drawing remain to be deciphered, it already sheds interesting light on the aesthetic and mindset of the artists working in Nuremberg around the time of Dürer’s death and shortly afterwards, and is also a significant addition to the known drawings of the leading printmaker and book illustrator of this time, Erhard Schön, a very talented draughtsman whose rare drawings remain surprisingly little studied.