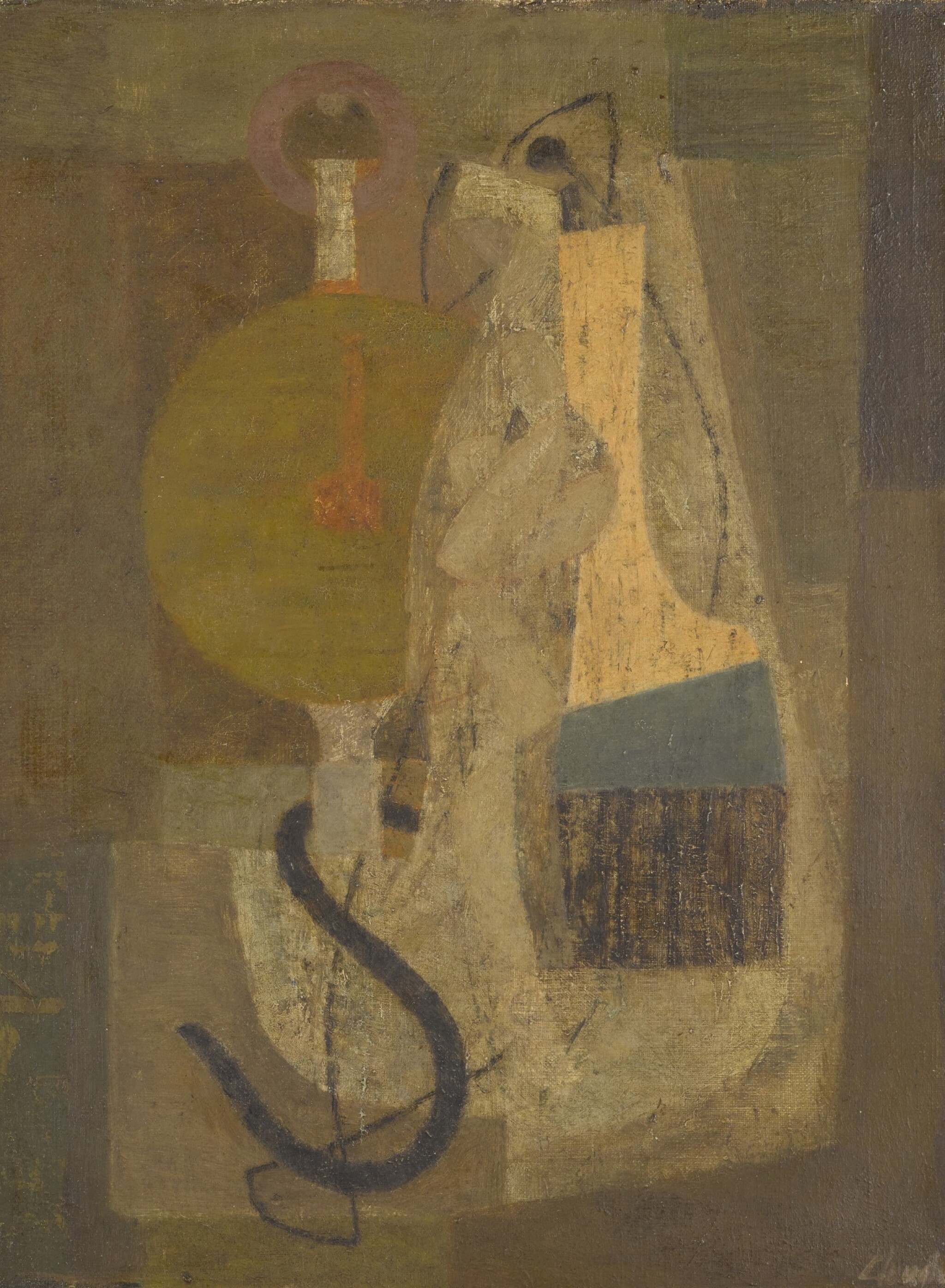 We are grateful to Gerard Hastings, author of Visions and Recollections: Prunella Clough and Keith Vaughan (Pagham Press, 2014), for his kind assistance with the cataloguing of the present work.

The canvas is original. The work appears to be in very good overall condition.

Slight rubbing and abrasion to the framing edges. Surface dirt, specks of matter and a discoloured and uneven layer of varnish. Some areas of very fine craquelure, mainly to the green pigment in the centre left of the composition.

Inspection under UV light reveals a small area of florescence possibly from an uneven varnish to the central left circular component.

The work is presented in a gold-painted wooden frame.

Acquired by Robert and Phyllis Lutyens in London, circa mid 1950s and thence by family descent to the present owner

During the mid-1940s Clough produced a series of still life paintings of objects she had chanced across on the beaches between Lowestoft and Southwold. She assembled pieces of sea-washed driftwood and sun-bleached skeletons of gulls into arrangements hanging from half-rotted sea groins. Later, she became drawn to Lowestoft harbour, which she visited at weekends to draw and paint. What she had learnt concerning the design and formal representation of still life objects associated with beaches, she now applied to the rusting tackle, netting and trade of the fishermen within the habour.

The present work is one of the very last of a group of paintings that she produced inspired by Lowestoft harbour (see Nets and Anchor, 1946; Fishermen with Sprats, 1948; Fishermen in a boat, 1949). It is closely associated with her major canvas Lowestoft Harbour, 1951 which depicts two fishermen weighing a basket of fish suspended from an S-shaped hook. The pale, yellow dial of the scales and the hanging hook both re-appear here, alongside a blue-handled brush of the type used to paint the fishing boats.

Clough’s forms are abstracted and distilled into a tightly designed pictorial essay, filtered through her knowledge of Cubism. The painted surface evokes and celebrates the texture of well-used, practical objects and is built up with roughly applied impastoes and thick deposits of pigment.

Having completed the group of paintings associated with the sea and fishing industry, Clough’s interest moved to the urban and industrial landscape of the city.