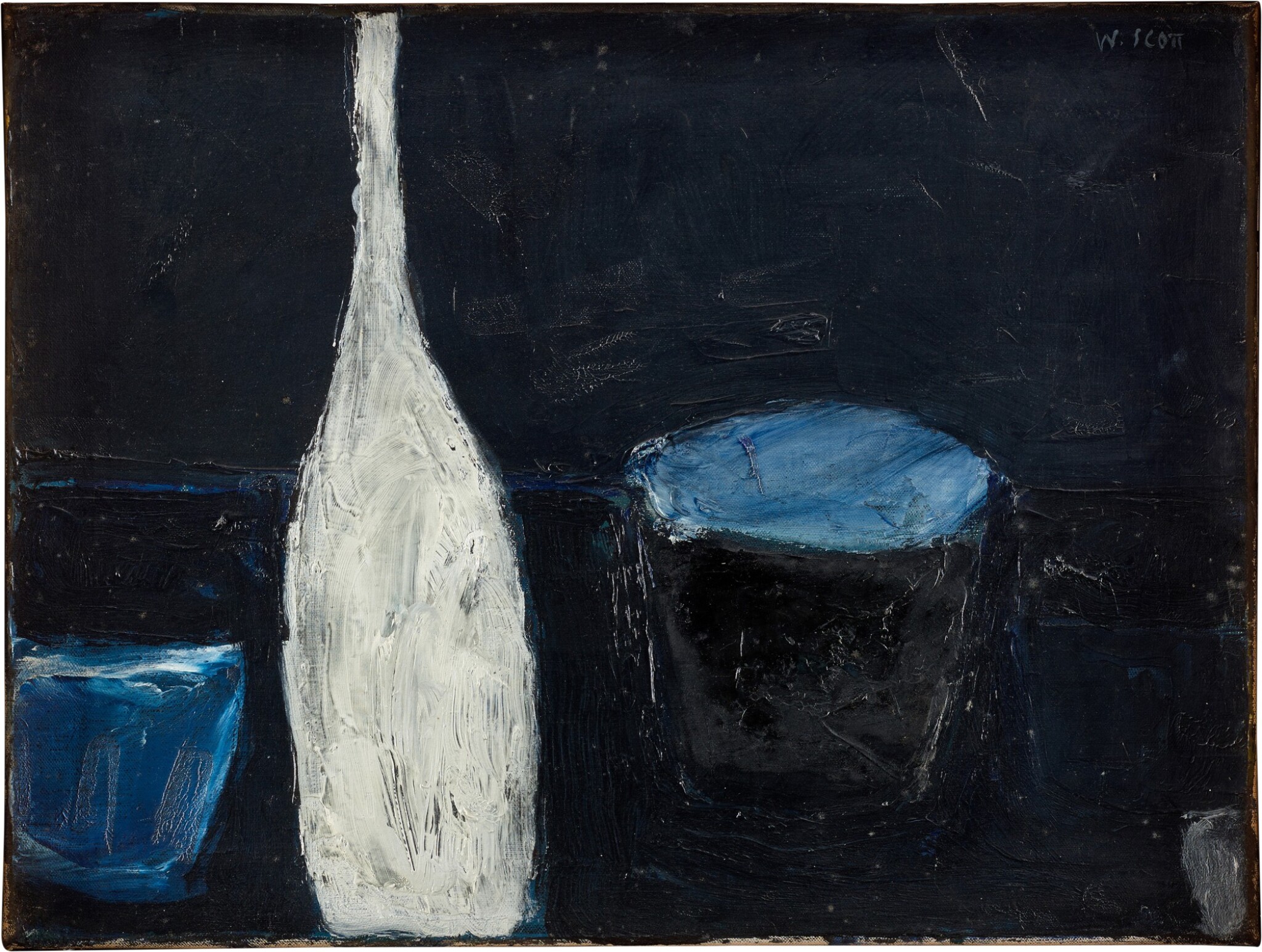 We are grateful to the William Scott Archive for their kind assistance with the cataloguing of the present work.

Acquired from the above in 1960 by the previous owner

Having been sent to Italy shortly after it was painted and where it has since remained, Bottle Still Life is an exciting re-discovery within Scott's oeuvre. One of the leading and most celebrated figures of post-War abstraction in Britain and Ireland, Scott was born in Scotland to an Irish father and Scottish mother. The family returned to Ireland when he was 11 years old. Two years later he enrolled for evening classes at Enniskillen Technical School, where his talent was nurtured and from which his trajectory as an artist began.

In the 1930s he studied at the Royal Academy Schools in London and in 1937, newly married to Mary (a sculptor), the couple made their first trip to Paris, and subsequently lived and worked in France until the outbreak of World War II. He joined the newly established Pont-Aven School of Painting teaching Figure and Still Life, while Mary taught Drawing and Sculpture. Expeditions around Brittany were made and works produced there represent some of the earliest in his career.

Upon their return to Ireland and then England, they would continue to make trips to France after the War. One of the most significant for Scott was his journey to Paris in 1952 with fellow painter and critic, Patrick Heron. There they met Nicolas de Staël whose work greatly influenced Scott. It was then that Scott saw a large exhibition of still-life painting at the Orangerie des Tuileries, La Nature Morte de L'Antiquité  à nos Jours, which also left a lasting impression.

Such experiences and influences we see played out in the present work, which is emblematic of Scott's lifelong preoccupation with the still-life subject. Executed in 1958, it marks the beginning of Scott’s refining of still-life towards the 60s and 70s when his work became increasingly minimalistic (see lot 39). With a feeling for both European modernism and the bold abstract art being produced in America (Scott had met some of the New York School’s most prominent figures such as Rothko, de Kooning and Pollock in 1953), Scott's work often occupies a dialogue between these two schools.

Bottle Still Life’s monochromatic colour palette and simplified forms reflects an original and considered response to both movements. For a brief two-year period after his visit to New York, Scott’s work neared total abstraction. However, by 1956 he had returned with vigour to the subject of still-life. Although the work removes much illusion to perspective, it still draws inspiration from the familiar objects of his youth that inspired the artist from an early age. The painterly white bottle casts a striking form against the textured surface of the canvas with its deep blues and blacks. It emerges from the darkness of the background to illuminate the image and, in its two dimensional verticality, divides the composition and draws attention to the significance of these supposedly mundane objects. The present work is as much an ode to the tradition of still-life as it is a redefinition of the academic subject.