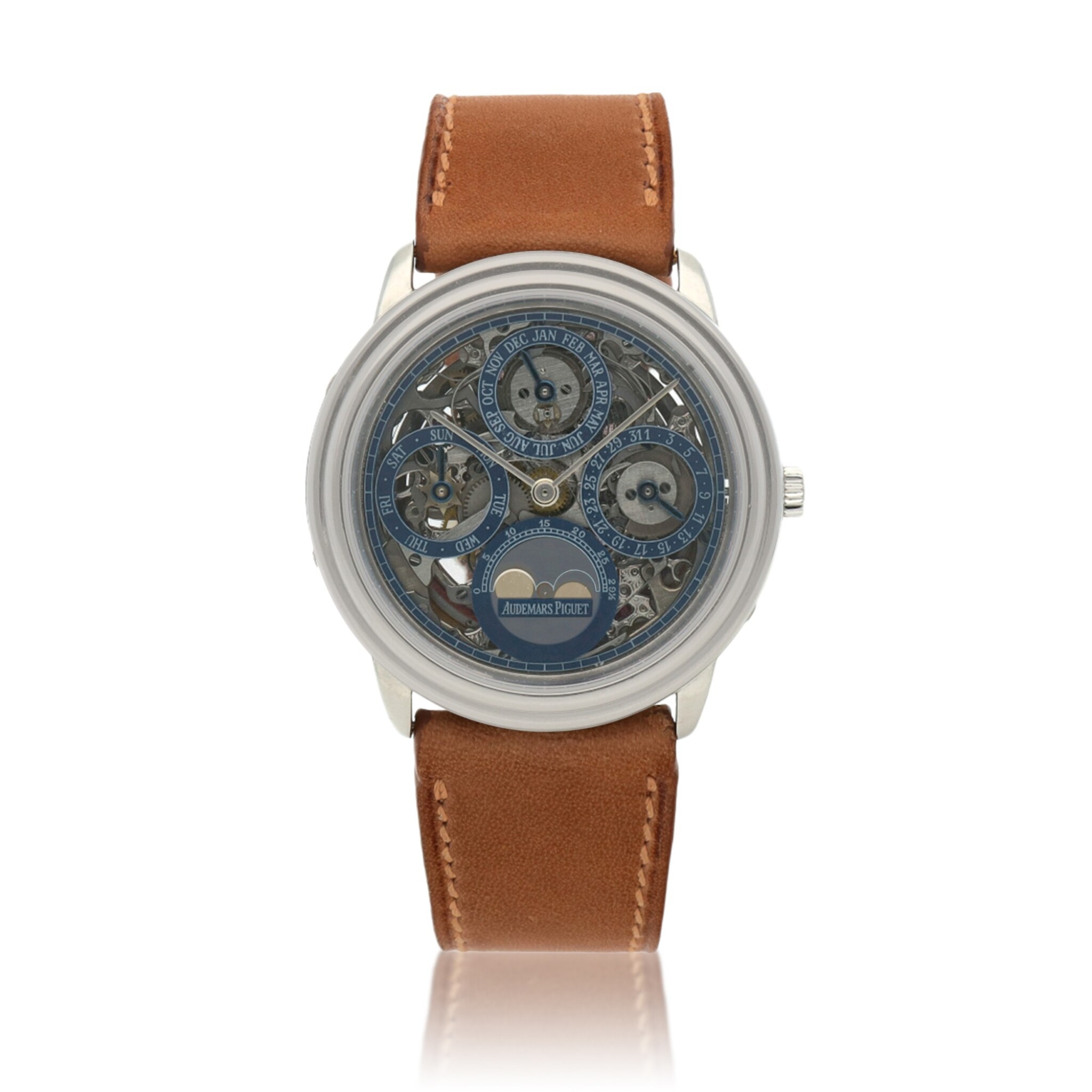 MVT: is running at the time of cataloging. The calendar is advancing, except for the month. It will require a service.

CASE: is in very good condition with crisp engravings. It presents some minute surface scratches.

DIAL: is in great condition.

The history of the perpetual calendar is at the very heart of Audemars Piguet. Since 1881 when it was founded, the Le Brassus based company has been producing timepieces featuring this complication.

Audemars Piguet is famous for introducing the first perpetual calendar wristwatch bearing the leap-year indicator. Until then, only pocket watches would have had this most useful indication. This important step was made in 1955 as an upgrade on the Reference 5516 that had been introduced a few years earlier.

In 1978, Audemars Piguet launched the reference 5548. Thanks to its classic size and balanced dial, the watch immediately met a large success. It was the only alternative to the Patek Philippe 3448 for someone who wanted a high-end Swiss perpetual calendar timepiece. The Audemars Piguet perpetual calendars have this instantly recognizable cross-like 4 subsidiary dials design, faithful to the earlier pieces. While other brands used widows to display indications such as the day or the month, AP has kept this layout both in its classic or sport perpetual calendar watches such as the Royal Oak. Before the late 1970’s, the perpetual calendar wristwatches were produced in very low numbers by a handful of Swiss Manufactures only. With the 5548, Audemars Piguet led the way, before Patek Philippe, Vacheron Constantin or Blancpain to a wider production of these complicated pieces.

Audemars Piguet produced various version of its classic perpetual calendar in the years following the introduction of the 5548. For example, some would feature a sapphire display back or some would have a different dial, such as the famous Tuscan dial.

Nonetheless, the present version belongs to another league. The reference 25668PT was produced in very small quantity. Less than a handful of them have appeared at auction for years.

The 25668PT features a see-through skeletonized dial. While most skeletonized watches sacrifices readability for aesthetics, this model cleverly made the subsidiary dials and outer track in attractive blue, creating a both useful and pleasing to the eye contrast with the movement, allowing the wearer to ready the time and the calendar in an easy and enjoyable way. The see-through caseback of the 25668 reveals a hand pierced and decorated movement and 21 carat gold rotor.

The 36mm diameter of this piece makes it both timeless and incredibly comfortable on the wrist.

Combining rarity, elegance, character, complication and comfort, this present platinum Audemars Piguet Perpetual calendar 25668 is a wonderful timepiece gathering everything a collector could possibly look for.