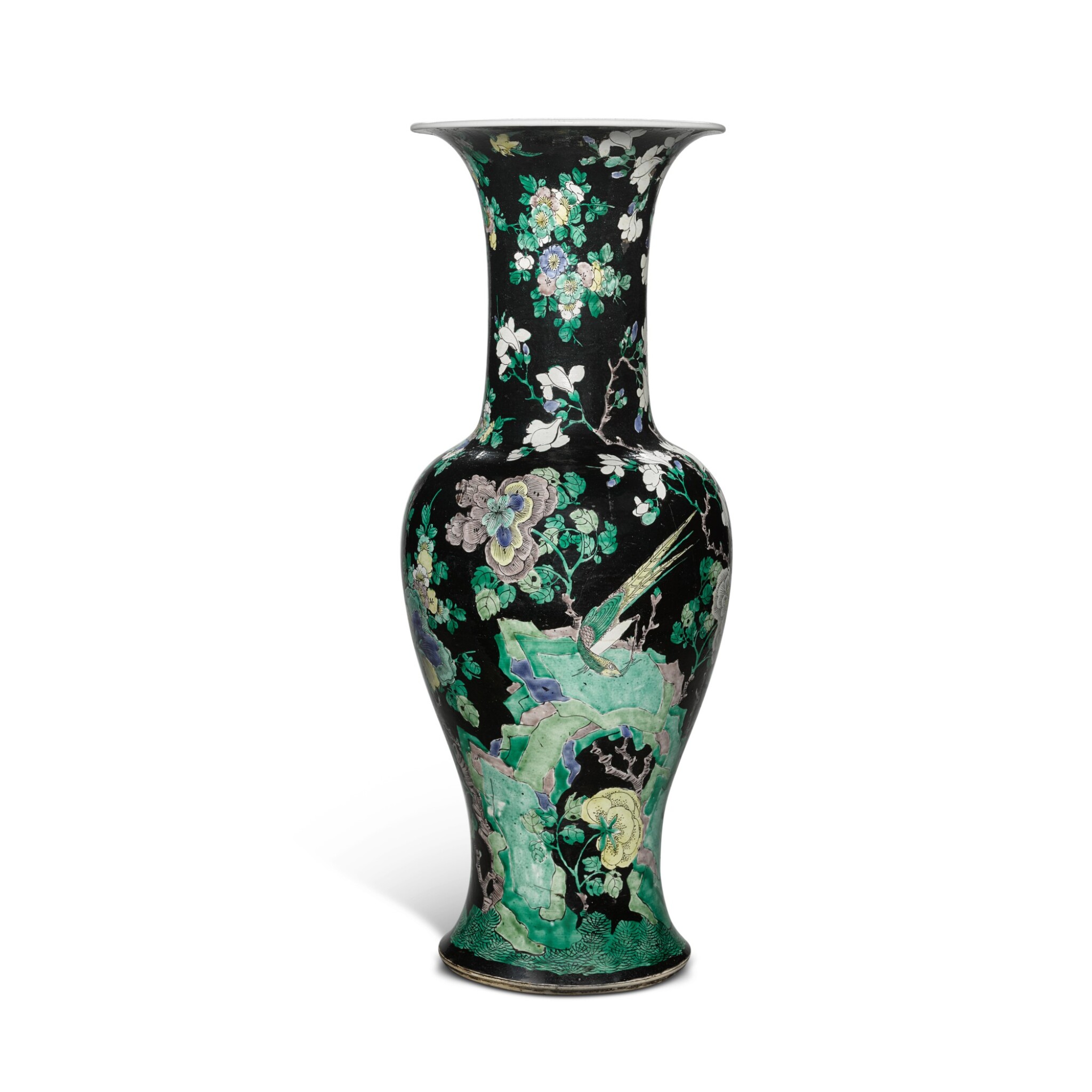 Please note that this lot should have a W symbol in the catalogue. This will be sent to Sotheby's Greenford Park Fine Arts Storage Facility immediately after the sale. 請注意，此拍品應附有W符號，將於拍賣後即時交付至Greenford Park倉庫。

Collection of James Garland, no. 1111 (according to label).

This monumental vase is especially rich in its design and choice of palette, with a pheasant and other birds in a garden setting, finely painted in colourful enamels against a striking black ground. The floral decoration is composed of magnolia and peonies, which together comprise a visual pun for the auspicious phrase yutang fugui (‘wealth and rank in the Jade Hall’). The Jade Hall alludes to the Hanlin Academy, a government bureau where esteemed scholars were appointed to work for the imperial court. Since the pheasant also symbolises high-ranked civil officials, the motifs depicted carry the auspicious message of wishes to a dignitary for a successful career.

A slightly smaller vase of this exact design but in mirror image, attributed to the Kangxi period, was in the collection of J. Pierpont Morgan, exhibited on loan at the Metropolitan Museum of Art, New York around 1910, listed in the Catalogue of the Morgan Collection of Chinese Porcelains, New York, 1907, p. 135, cat. no. 756, and illustrated on pl. XLVII, Case XXVII. A very similar design can also be found on a slightly smaller Kangxi famille noire vase formerly in the collection of George Salting and now preserved in the Victoria and Albert Museum, London, accession no. C.1315-1910, illustrated in W. B. Honey, The Victoria and Albert Museum. Department of Ceramics. Guide to the Later Chinese Porcelain. Periods of K’ang Hsi, Yung Cheng and Ch’ien Lung, London, 1927, pl. 64.

Related design of blossoming trees and birds can be found on two slightly shorter Kangxi vases of this type: one formerly in the collection of Sir Augustus Wollaston Franks and now in the British Museum, London, accession no. Franks.315; the other, from the collection of Grandidier collection and now preserved in the Musée Guimet, Paris, illustrated in Oriental Ceramics, The World's Great Collections, vol. 7: Musée Guimet, Paris, Tokyo, New York and San Francisco, 1981, pl. 147. Compare also a pair of Kangxi vases painted with motifs – such as pheasants, flowers and rocks – closely related to the present piece, but with ovoid bodies and domed covers, from the Leonard Gow collection, illustrated in R.L. Hobson, Catalogue of the Leonard Gow Collection of Chinese Porcelain, London, 1931, pl. LXXVII.

The famille noire colour scheme was so highly appreciated by Western collectors in the late 19th and early 20th century, that most examples today are in Western collections and few are remaining in China. At the time, famille noire vases commanded by far the highest prices of any Chinese porcelains, and were popular with the most important collectors of Western art, such as Morgan, Frick, Widener, Rockefeller, Rothschild, in whose residences they accompanied old master paintings. Famille noire vases from the Widener Collection in the National Gallery of Art, Washington D.C., for example, are illustrated in the Museum’s publication Decorative Arts, Part II. Far Eastern Ceramics and Paintings. Persian and Indian Tugs and Carpets, Washington D.C., 1998, pp. 184-7, with descriptions written by Stephen Little (e.g. accession nos 1942.9.624, 1942.9.625, 1942.9.626, 1942.9.627 and 1942.9.628). See also a five-piece garniture attributed to the Kangxi period, in the Dallas Museum of Art, object numbers 1985.R.957 to 1985.R.960.A-B.

Since the popularity of this type of porcelain naturally led to the production of fakes, the very existence of famille noire in the Kangxi period had at some point been called into question. While later copies certainly exist, further research has since rehabilitated the genre. A famille noire bowl with flower designs in similar colours as on this vase, from the collection of Augustus the Strong, Elector of Saxony and King of Poland (r. 1694-1733), now in the Staatliche Kunstsammlungen, Dresden, for example, was recorded in an inventory of 1721, i.e. at the end of the Kangxi period, probably soon after it was made; see Linda Rosenfeld Pomper, ‘Famille-Noire Porcelains. Tracing the Taste Through the 18th and 19th Centuries’, Arts of Asia, July – August 2013, pl. 3. In terms of its painting style, composition and enamel tones, the present vase is certainly much closer to Kangxi famille verte porcelains than to known late Qing (1644-1911) or Republican (1911-1949) copies. The bright blue enamel, in particular, is in a tone similar to one in the National Gallery of Art, Washington D.C., accession no. 1942.9.626. The biscuit body revealed at the rim also demonstrates that the vase was made and then glazed on the inside, leaving a clear neat edge from where the biscuit was left to be enamelled.