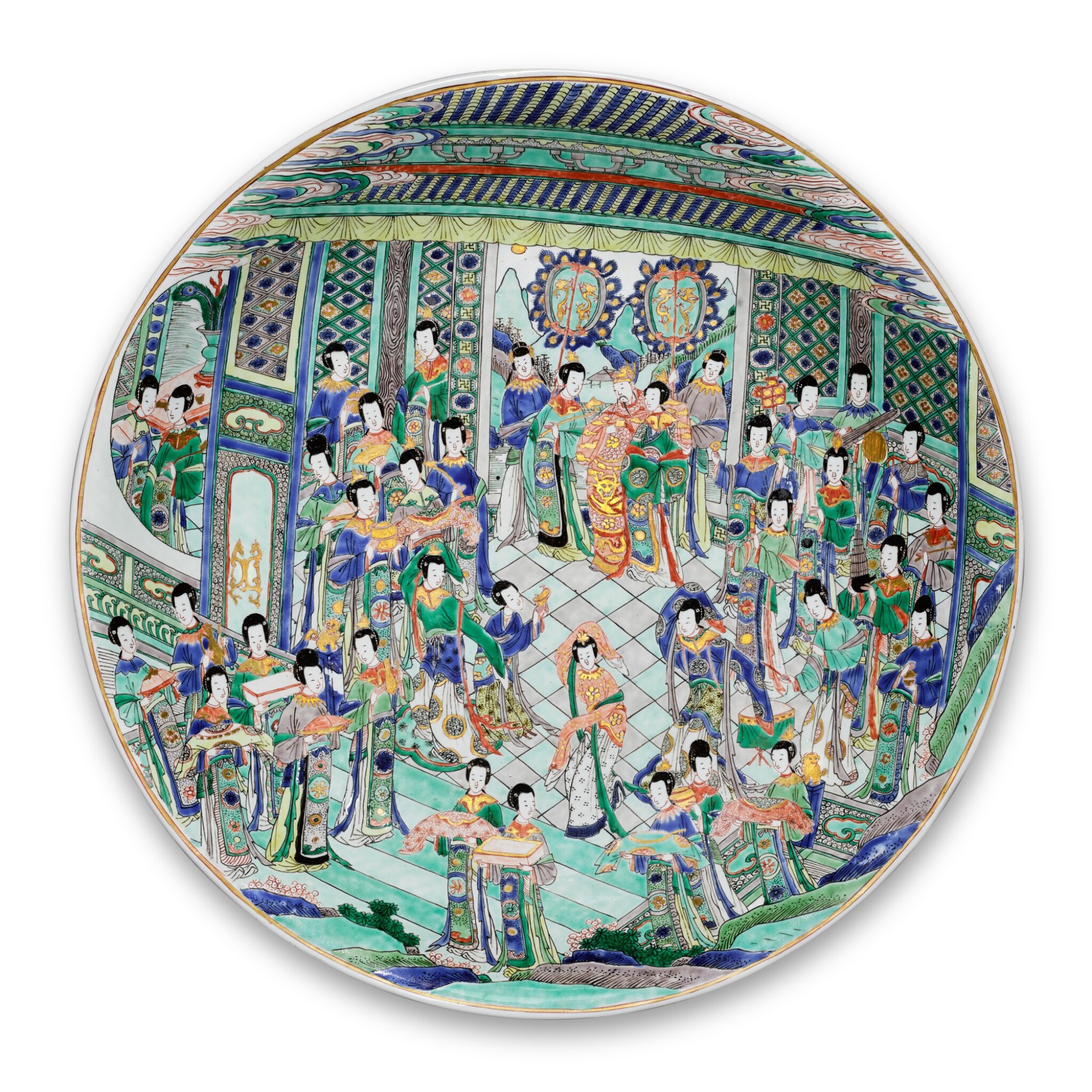 This dish is in overall good condition, the enamels and gilding are well-preserved, with only some very minor wear and losses. There are also a few minor restored chips to the rim, and further small chips to the foot rim.

This awe-inspiring charger, superbly painted with vivid enamels of the famille verte palette with a lively and dense scene of a lavish court banquet, is a particularly fine example of a distinguished group of large dishes created during the Kangxi period (1662-1722). With the composition extended to the edge of the plate, they represent veritable paintings on porcelains. When compared to its counterparts, the enamelling of the present piece is exceptionally impressive for its wealth of colour and meticulous detail. The brilliance of the overglaze enamels is subtly highlighted in gilt, which remains in a well-preserved state. Another noteworthy feature of the present piece is the extensive application of blue enamel across the dish. Since blue enamel had only been developed during the Kangxi reign, the colour scheme of this charger might have been devised specifically to exhibit the new colour that recently became available.

The scene on this large dish depicts an elaborate banquet, with the emperor entertained by a troop of female musicians and dancers in an extravagant palace. Similar depictions of banquets can also be found on related chargers: a large dish showing a banquet scene from the novel Romance of Sui and Tang, one in the Jie Rui Tang Collection, illustrated in Jeffrey P. Stamen, Cynthia Volk and Yibin Ni, A Culture Revealed. Kangxi-Era Chinese Porcelain from the Jie Rui Tang Collection, Bruges, 2017, pl. 10, recently sold in our New York rooms, 19th March 2019, lot 349; two other chargers depicting a formal banquet scene, with the emperor seated at a central table and flanked on either side by officials at two long tables, one sold in our New York rooms, 11th April 1987, lot 199, the other sold at Christie’s London, 7th November 2006, lot 189.