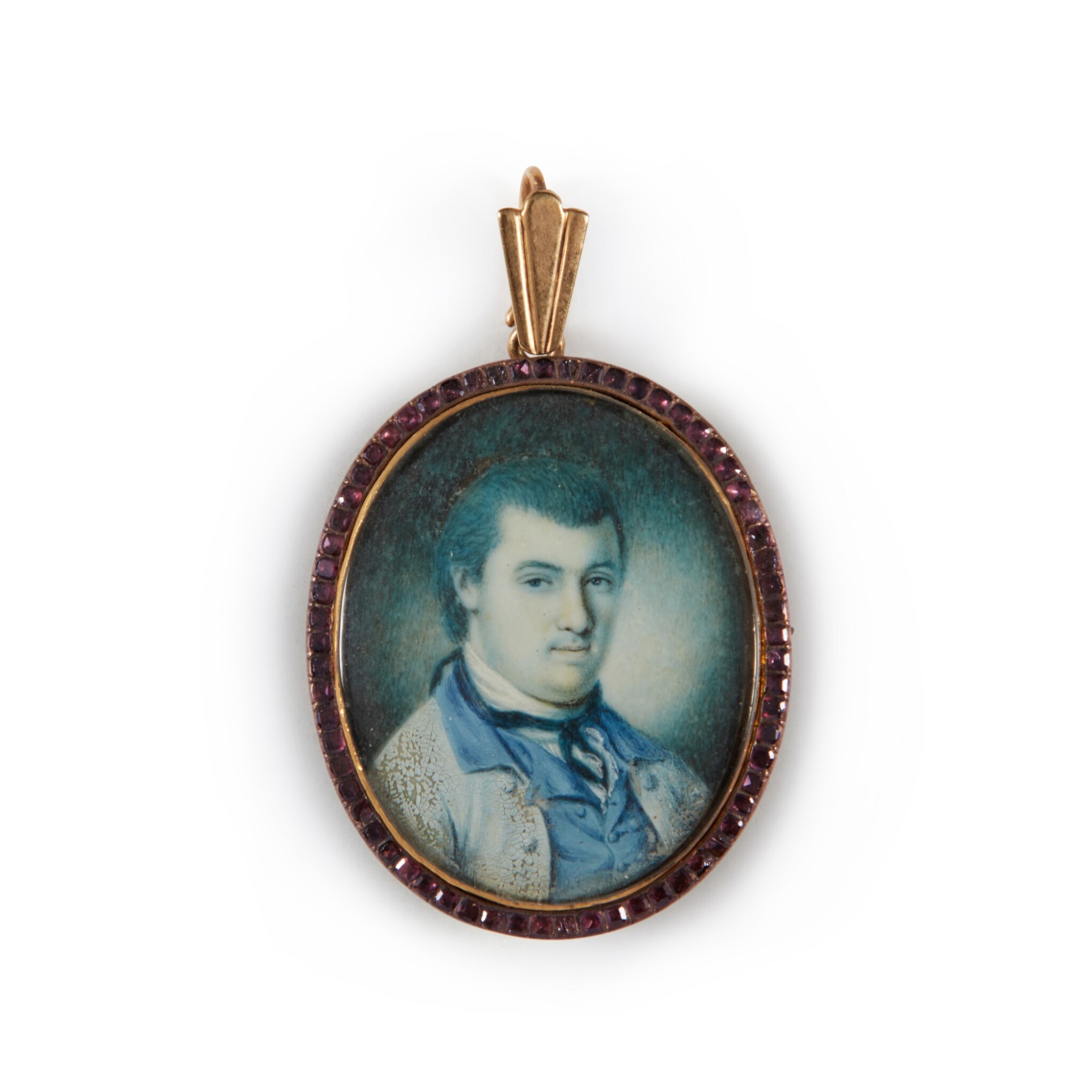 housed in a copper frame with garnet bezel, the reverse engraved Nicholas Carroll/ 1774 under a small window containing a lock of hair.

Paint flaking of the sitter's coat along the bottom edge. The red color that the artist used was of greater fastness, thus the blue tone that has resulted over time is commensurate with many of Peale's portraits. Examined under UV light, there is a small amount of inpainting outlining the proper right side of the sitter's head.

Descended in the familial line of the subject’s brother, James Maccubin Carroll (1761-1832);
to Charles Ridgely Carroll (1800-1870)
to Mary Carroll m. Robert Denison;
to Mary Carroll Denison m. Charles Frick;
to Dorothy Blake Frick m. T. Courtney Jenkins;
to Dorothy Carroll Jenkins Pearre m. Aubrey Pearre (present owner).
Portrait Miniatures by Charles Willson Peale, catalogue no. 129, ill. No. 399; J. Hall Pleasants Studies in Maryland Paintings, Maryland Historical Society, no. 3327; Frick Art Reference Library, New York, no. 39354.
The artist Charles Willson Peale was born in Chester, Maryland in 1741, and, having lost his father at a young age, was forced to take on apprentice jobs in saddle making, silver smithing, sign painting and portraiture in Annapolis, Maryland, in order to support his mother. He had several lessons with painter John Hesselius and traveled to Boston to study with John Smibert and John Singleton Copley. Returning to Maryland from Boston in the early 1760s, his talent was recognized by many wealthy landowners, particularly Charles Carroll, the uncle of the sitter, who lead the fundraising for Peale to study with expatriate history and portrait painter, Benjamin West, in London. Upon his return to Annapolis in 1769, Peale quickly became the choice portrait painter of the elite during the Revolutionary era. Before moving his business and family to Philadelphia in 1776, Peale would paint the portrait of his former benefactor’s nephew and adopted son, Nicholas (Maccubbin) Carroll.1

Nicholas (Maccubbin) Carroll of Anne Arundel County Maryland was born on March 1, 1751 to Nicholas Maccubbin and Mary Clare Carroll (1727-1781). His father was an Annapolis merchant and High Sheriff of Anne Arundel County and his mother was the daughter of a surgeon; they had five children.2 The subject’s uncle, the Barrister, Charles Carroll (1723-1783) had a great fortune and no direct heirs. At his death in 1783, Charles Carroll willed his property to his nephews James and Nicholas Maccubbin, upon the condition that they adopt the Carroll surname.3 It is unknown when Charles Carroll included this stipulation in his will, but given the engraved name of Nicholas Carroll, not Maccubbin, and pre-1783 date, it is possible that the barrister and his sister, who he was close to, decided this advantageous adoption early on. There is also the possibility that a member of the family, whom this was passed down to, decided to have the name and date engraved posthumously.

In 1783, Nicholas Carroll inherited 4,370 acres in Anne Arundel and Baltimore counties, as well as lots in the towns of Annapolis and Elk Ridge. He also married Anne Jennings (1761-1830) that same year. Nicholas was a member of the Maryland Convention which ratified the Federal Constitution in 1788 and subsequently served as Mayor of Annapolis in 1790. He was a patron and supporter of Charles Willson Peale’s museums through occasional gifts.4 Nicholas Carroll died on May 22, 1812 and was succeeded by three children, Ann Elizabeth Carroll Mason, Thomas Henry Carroll, and John Henry Carroll.5

This is a fine documented Colonial miniature by Peale that has remained in family hands for 245 years. Amongst several theories as to why this miniature descended in the family of the sitter’s brother rather than to his own offspring, the most likely scenario revolves around the settlement of the Mount Clare estate. Mount Clare was the primary home of the barrister, Charles Carroll and his wife, Margaret Tilghman Carroll, who died after Nicholas in 1817, and finally the home, and its contents which may have included this miniature, were passed down to James, who died last in 1832. Nevertheless, this fine documented Colonial miniature by Peale has remained in family hands for over 245 years.