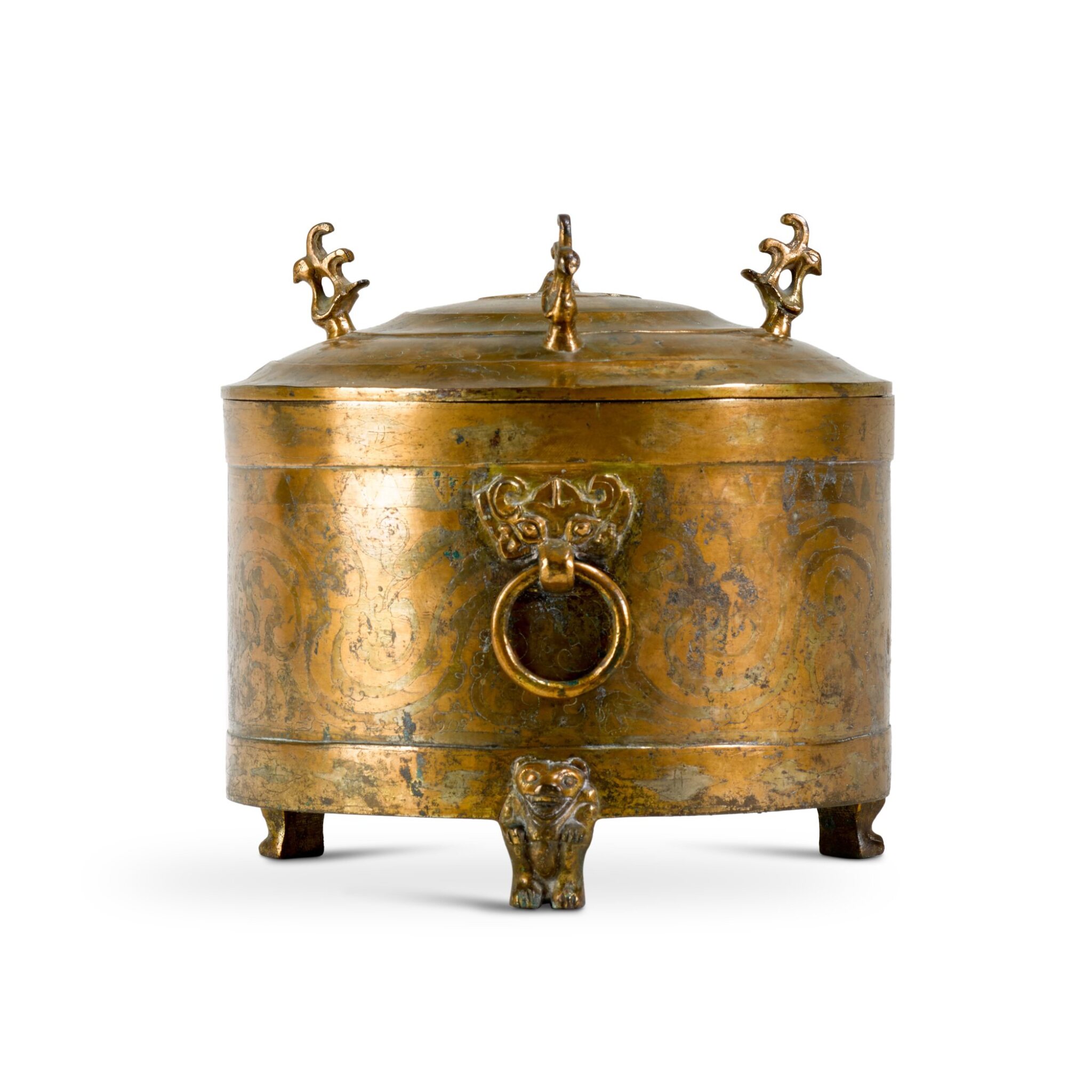 A gilt and silvered bronze ‘animal’ vessel and cover, zun,

the cylindrical body decorated with a main frieze enclosing an undulating silvered cloud scroll, amid the scrolls with finely rendered animals, such as a pheasant, a leaping deer, a pouncing bear and other mythical creatures, all below a silvered chevron band, the vessel flanked by a pair of mask handles suspending loose rings, supported on three crouching bears as feet, the slightly domed cover with two concave bands forming three concentric rings, each ring similarly decorated with a variety of animals amid meandering scrolls, the cover set with three bird-shaped finials and a small loop knob on a quatrefoil design in relief, the base with additional silvered scrolls

Cylindrical vessels of this form were based upon lacquerwares from the late Warring States to the early Han dynasty. The raised borders circulating the rims imitate the metal bands used to reinforce the lacquer vessels. Zoomorphic feet and handles can also be traced back to lacquerware.

A set of Western Han dynasty lacquer vessels with gold-foiled figures and animals surrounded by clouds was excavated from Hanjiang in Yangzhou, Jiangsu, now preserved at the Yangzhou Museum, and published on the museum website. The set includes a cylindrical vessel ornated with silver bands and a fitted cover similarly adorned with a flower motif at the centre.

A larger gilt-bronze zun of this form but cast with an animal design in relief was excavated from Dachuan in Shanxi and is now in the Shanxi Museum, Taiyuan (Jessica Rawson, 'Commanding the Spirits: Control Through Bronze and Jade', Chinese Bronzes: Selected Articles from Orientations 1983-2000, Hong Kong, 2001, pp. 288-300, fig. 7). Rawson suggests that it was probably made for a member of the Western Han court. She observes that the circular form of the Dachuan vessel "is typical of Chu lacquers and quite new to the Yellow river area" and it bears features borrowed from different areas. Stylistically inspired by the animal motifs in Mongolia and southern Siberia, the creatures are employed "to express beliefs derived from the south, and especially from Chu, but also from the state of Qi to the east" (p. 292). On the present vessel, while the animals are derived from ordos tradition, the scrolling clouds recall the flowing lines of Chu lacquer painting.

A slightly taller covered vessel of this form, surmounted with a phoenix knop among three further birds, parcelled-gilt and silvered with two tiers of animals amidst clouds around the sides, was included in the exhibition Ancient Chinese Bronzes of Han Dynasties (202B.C.-220A.D.), Tenri University Sankokan Museum, Nara, 1990, illustrated on the cover. Compare also a white stone vessel of this form but without a from the tomb of Liu Hong (d. 306), Huangshantou, Hunan, attributed to the Eastern Han period, carved with two friezes of mythical animals among clouds, including a lunging bear similar to that of the present vessel (Rawson, op.cit., fig. 17 and 17a).