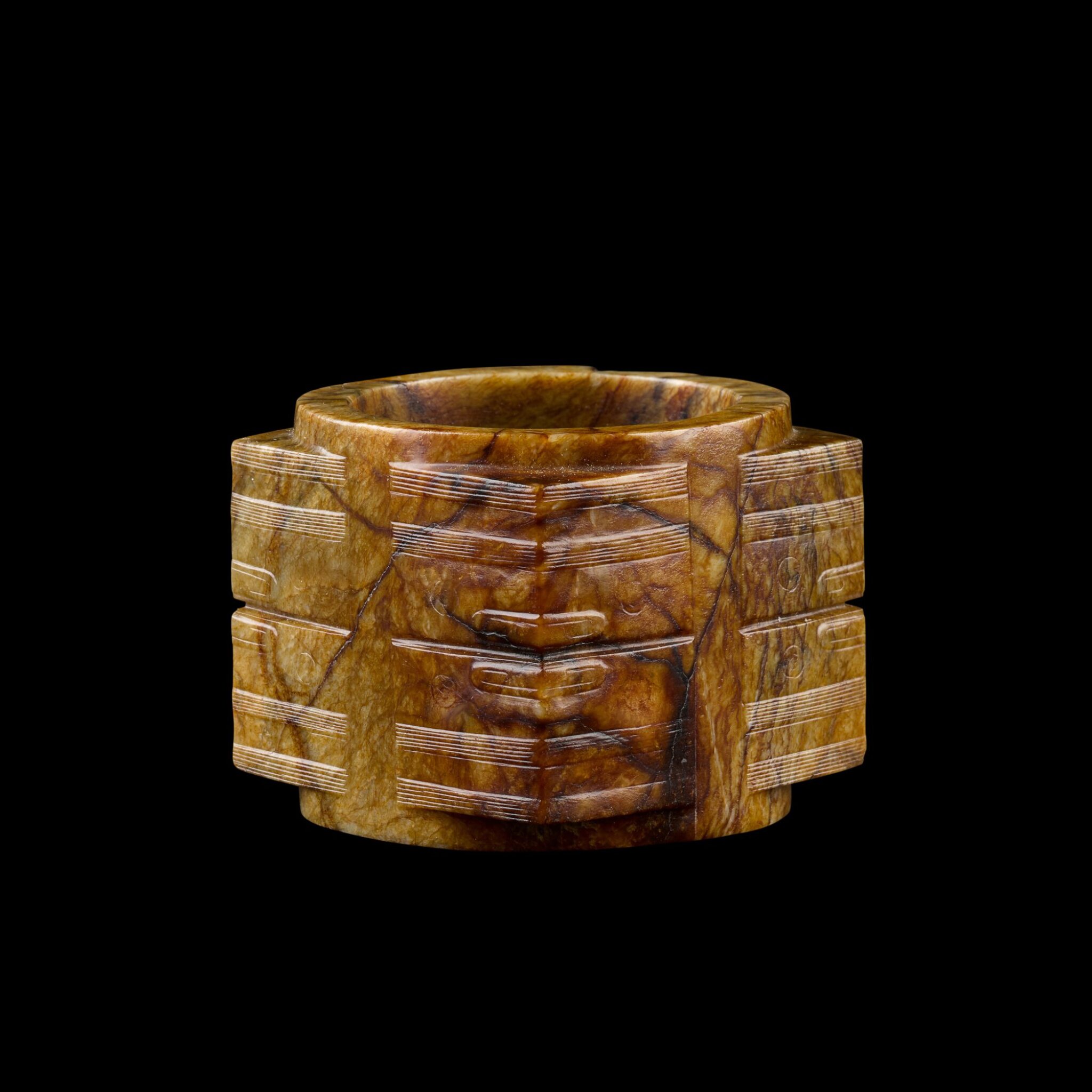 of short cylindrical form with a square cross-section, the sides divided into two registers, carved with a pair of confronting stylised human masks at each corner, each mask comprising two horizontal striated bars above a shorter oblong bar forming the nose and two faintly incised circles forming the eyes

A minor dent (approx. 1cm) near one corner. The stone with original inclusions and veining, with occasional minuscule losses along the veining. Occasional insignificant nibbling and bruising to the extremities.

The Liangzhu culture in the Yangtze River Delta, which flourished from the late 4th to the end of the 3rd millennium BC, was one of the most prominent Neolithic Chinese civilizations. Among the large variety of Liangzhu artefacts, cong – tubular jades with a central perforation – stand out as iconic of this culture. They were made for the most prestigious ranks in the society. Although the original meanings of cong were lost following the decline of the Liangzhu culture, their form continued to fascinate generations of collectors, connoisseurs, scholars and artisans for centuries. The importance of cong in the history of Chinese art therefore cannot be overstated.

The earliest cong have the form of a circular bangle with a single tier of zoomorphic masks. The rectangular form soon took over and the motif became more complex, often featuring a crowned human figure, perhaps a shaman, on top of an animal mask with protruding goggled eyes. Examples with alternating registers of stylised human faces and animal masks suggest that the motif seen on the present cong represents the face of the shaman and the striated bands probably symbolise the headdress. Towards the dusk of the Liangzhu civilization, these elaborate, fine engravings slowly disappeared and simpler designs appeared, while at the same time taller cong with multiple rows of faces were made.

A slightly taller cong with two tiers of faces was excavated from Fanshan, no. M14:181, now in the Liangzhu Museum, Hangzhou, and included in Liangzhu and Ancient China: The 5000 Year Civilization Demonstrated by Jades, Palace Museum, Beijing, 2019, cat. no. 11, together with a larger two-tiered example with a patina similar to that of the present example, inscised on the interior in the Qianlong period with an imperial poem, cat. no. 198.

The arrangement of the confronting rows of faces on the present cong is highly unusual and no other example appears to be published. However, compositional deviation is known in the Liangzhu culture; a brown jade two-tiered example carved with animal masks above the row of shamen, also later inscribed with an imperial poem by the Qianlong Emperor, is preserved in the Palace Museum, Beijing (ibid., cat. no. 199).