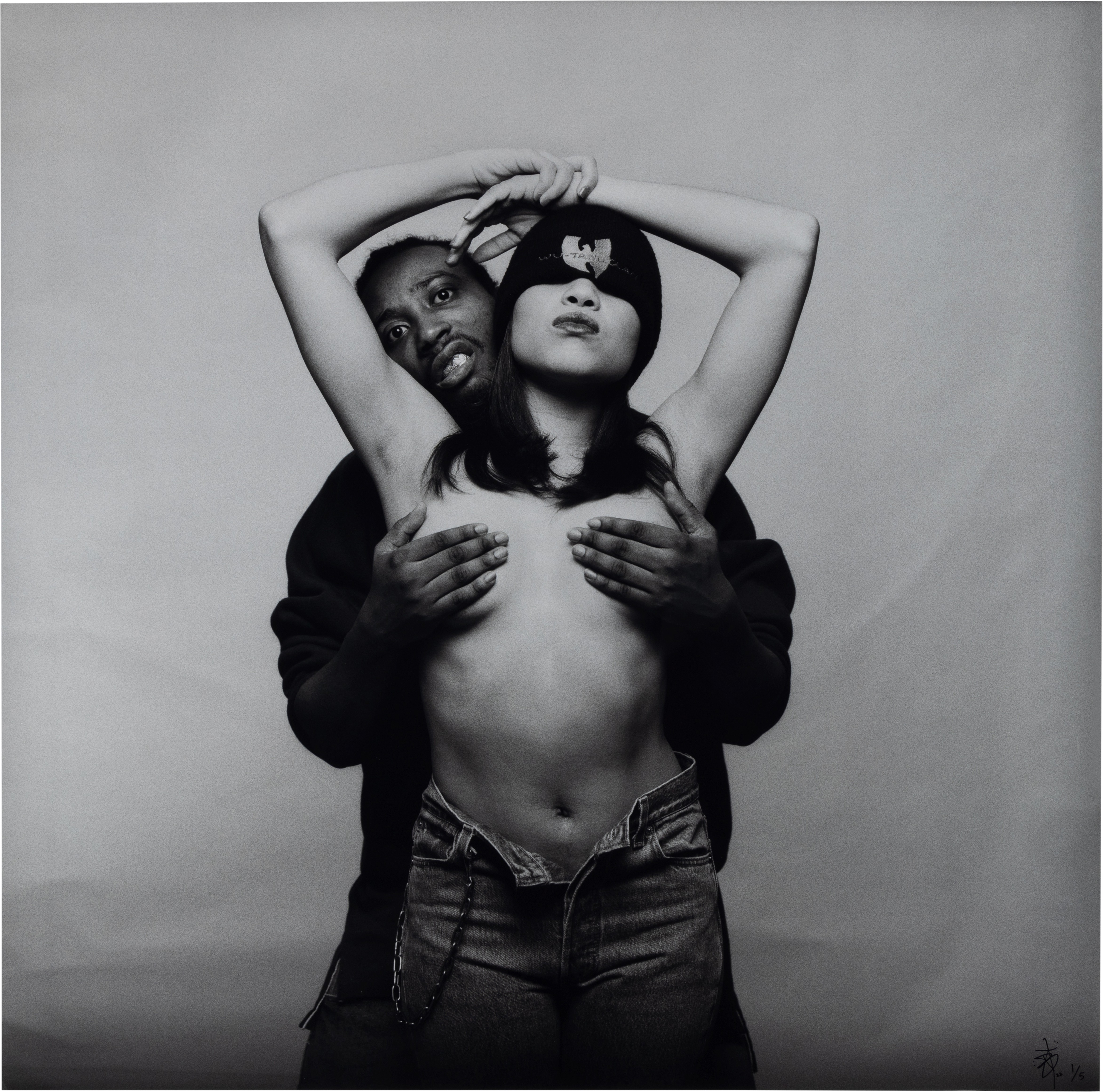 One of an edition of 5, signed by Cross.

AN ICONIC IMAGE OF THE WU-TANG CLAN'S "LOOSE CANNON," OL' DIRTY BASTARD, FROM THE COVER OF RAPPAGES MAGAZINE THAT ENDED UP ON BOOTLEG T-SHIRTS ON 125TH STREET

By the time photographer Brian "B+" Cross had shot the now instantly-recognizable cover for Rap Pages magazine of the Wu-Tang Clan's Ol' Dirty Bastard, the shot that had inspired it - Janet Jackson on the cover of the September 1993 issue of Rolling Stone - had gone viral for almost two years. Patrick Demarchelier famously captured a then-24 year old Jackson clad in only jeans with her then-boyfriend's hands cupped over her breasts and sparked a sensation that would launch a thousand imitators, the current lot being one of them. Nearly two years later, while in a meeting with Cross, who was the photo editor for Rap Pages at the time, editor Gabe Alvarez posed the question: "what if those hands on Janet's breasts were Ol' Dirty's hands?"

The rest, as they say, is history.

The resulting photo appeared on the cover of Rap Pages' June 1995 issue with the tagline: Ol' Dirty: keepin' it raw. Cross remembers the shoot below:

"Thanks to the courage of our editor, Sheena Lester, we flew to New York and ended up with a thirty minute session with ODB. The model was a little nervous I think and requested a closed set...when push came to shove ODB became nervous, too. In all, the session lasted a very short time: two rolls of the Janet tribute and two rolls of solo portraits and ODB was gone.

Weeks later, bootleg t-shirts of the Rap Pages cover were being sold on 125th Street in Harlem and we knew something impactful had happened." (Brian Cross)

Perhaps best known for his singles "Got Your Money" and "Shimmy Shimmy Ya", ODB rose to individual stardom via his often overly profane, half-sung and half-rapped style. His cadence, meandering lyrics, and wild antics made him somewhat of a polarizing figure, but, according to RZA of the Wu-Tang Clan, "... the man who became ODB, Ason Unique, my cousin, he was a scientist and a minor prophet... People may not know this from the outrageous character he played, but ODB was a visionary."

Brian “B+” Cross is co-founder of the renowned production house Mochilla, and an artist working at the intersection of music and photography. He has photographed album covers for artists such as Damian Marley, David Axelrod, DJ Shadow, Fly­ing Lotus, Eazy-E, J. Dilla, Jurassic 5, RZA, Company Flow, Madlib, Dilated Peoples, Mos Def, Thundercat, Kamasi Washington and Q-Tip. Cross was the director of pho­tography for the Academy Award–nominated documentary Exit Through the Gift Shop, and he has directed and produced several feature-length documentaries (Keepintime, Brasilintime and Timeless: Suite for Ma Dukes).

Cross was the photo editor of the music magazine Wax Poetics from 2004 to 2010, and Rap Pages from 1993 to 1998. Hiss 1993 book It’s Not About a Salary: Rap Race and Resistance, was the first book to document the burgeoning West Coast Hip Hop scene. It was nominated for the Rolling Stone and NME music book of the year award.

Currently, Cross lives in Los Angeles and is an Associate Professor in the Department of Visual Arts at the University of California, San Diego. His most recent book Ghostnotes: Music of the Unplayed was published in late 2017.