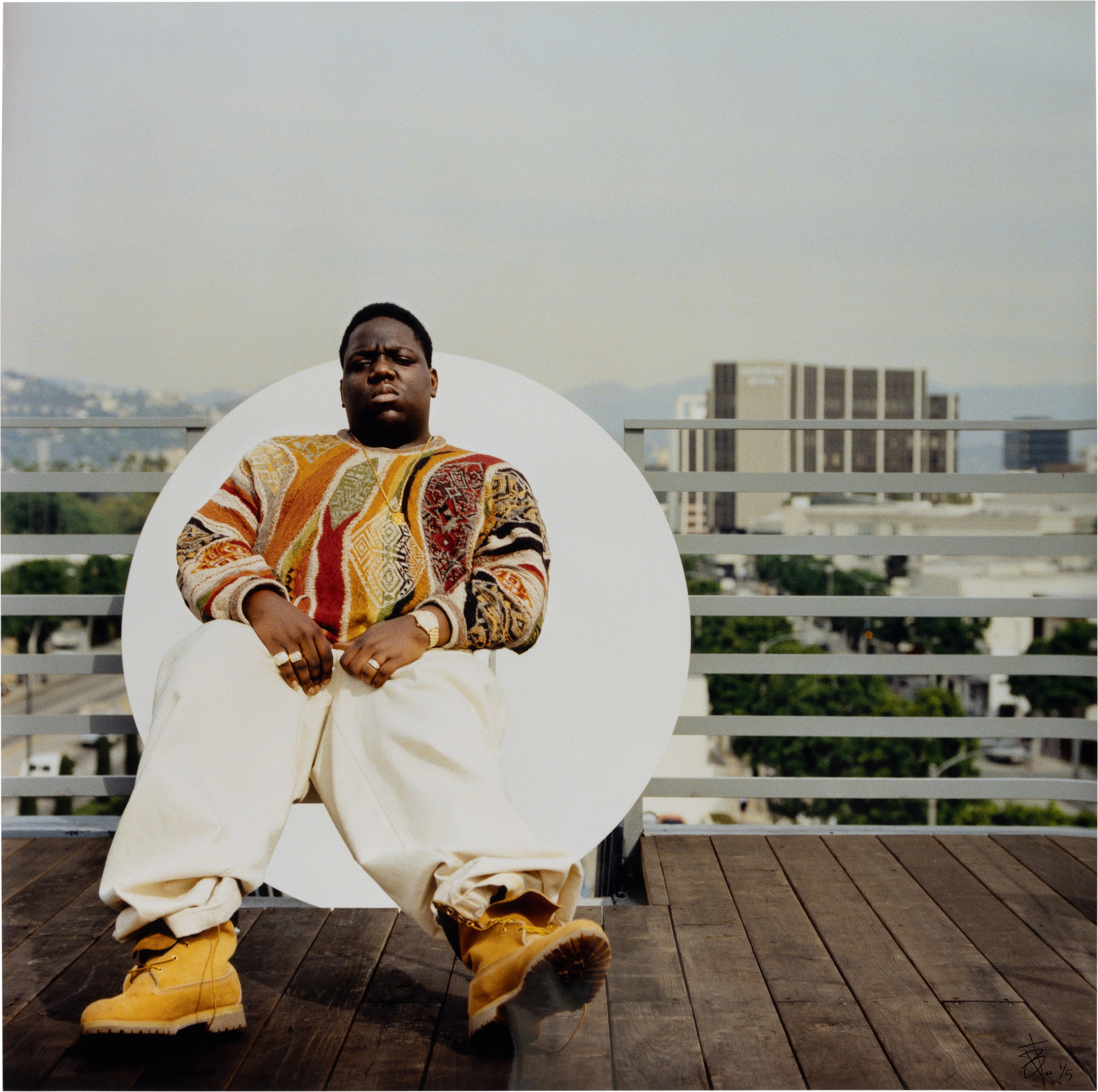 One of an edition of 5, signed by Cross.

THE KING OF NEW YORK GOES WEST FOR A SHOOT TO PROMOTE HIS FIRST ALBUM, READY TO DIE

Staring pensively at the lens of Brian "B+" Cross, Biggie Smalls appears to off-set the psychedelic pattern of his colorful Coogi knit sweater, almost daring the viewer to mock such a bold fashion choice beneath the California sun. Casting an imposing, haloed figure, Smalls' fingers glimmer with thick gold rings, a gold watch around his right wrist. His simmering swagger is evident, a swagger that would rightly earn him and his hypnotic rhymes the title of "King of New York." On a rooftop in Beverly Hills, where he was promoting his first studio album, Ready to Die, on the west coast, Biggie seems to be taking in the moment before the many moments to come - his fame, his wealth, his mortality and subsequent immortality.

Cross, on assignment for the Japanese magazine Fine, remembers the shoot with the late rapper below:

"We shot on the roof of the WEA Publishing building in Beverly Hills, less than a mile from where he would be murdered two weeks later...Mostly what I remember was just how gracious he was and how soft his hands were. Him and John Lee Hooker had the softest hands." (Brian Cross)

Brian “B+” Cross is co-founder of the renowned production house Mochilla, and an artist working at the intersection of music and photography. He has photographed album covers for artists such as Damian Marley, David Axelrod, DJ Shadow, Fly­ing Lotus, Eazy-E, J. Dilla, Jurassic 5, RZA, Company Flow, Madlib, Dilated Peoples, Mos Def, Thundercat, Kamasi Washington and Q-Tip. Cross was the director of pho­tography for the Academy Award–nominated documentary Exit Through the Gift Shop, and he has directed and produced several feature-length documentaries (Keepintime, Brasilintime and Timeless: Suite for Ma Dukes).

Cross was the photo editor of the music magazine Wax Poetics from 2004 to 2010, and Rap Pages from 1993 to 1998. Hiss 1993 book It’s Not About a Salary: Rap Race and Resistance, was the first book to document the burgeoning West Coast Hip Hop scene. It was nominated for the Rolling Stone and NME music book of the year award.

Currently, Cross lives in Los Angeles and is an Associate Professor in the Department of Visual Arts at the University of California, San Diego. His most recent book Ghostnotes: Music of the Unplayed was published in late 2017.