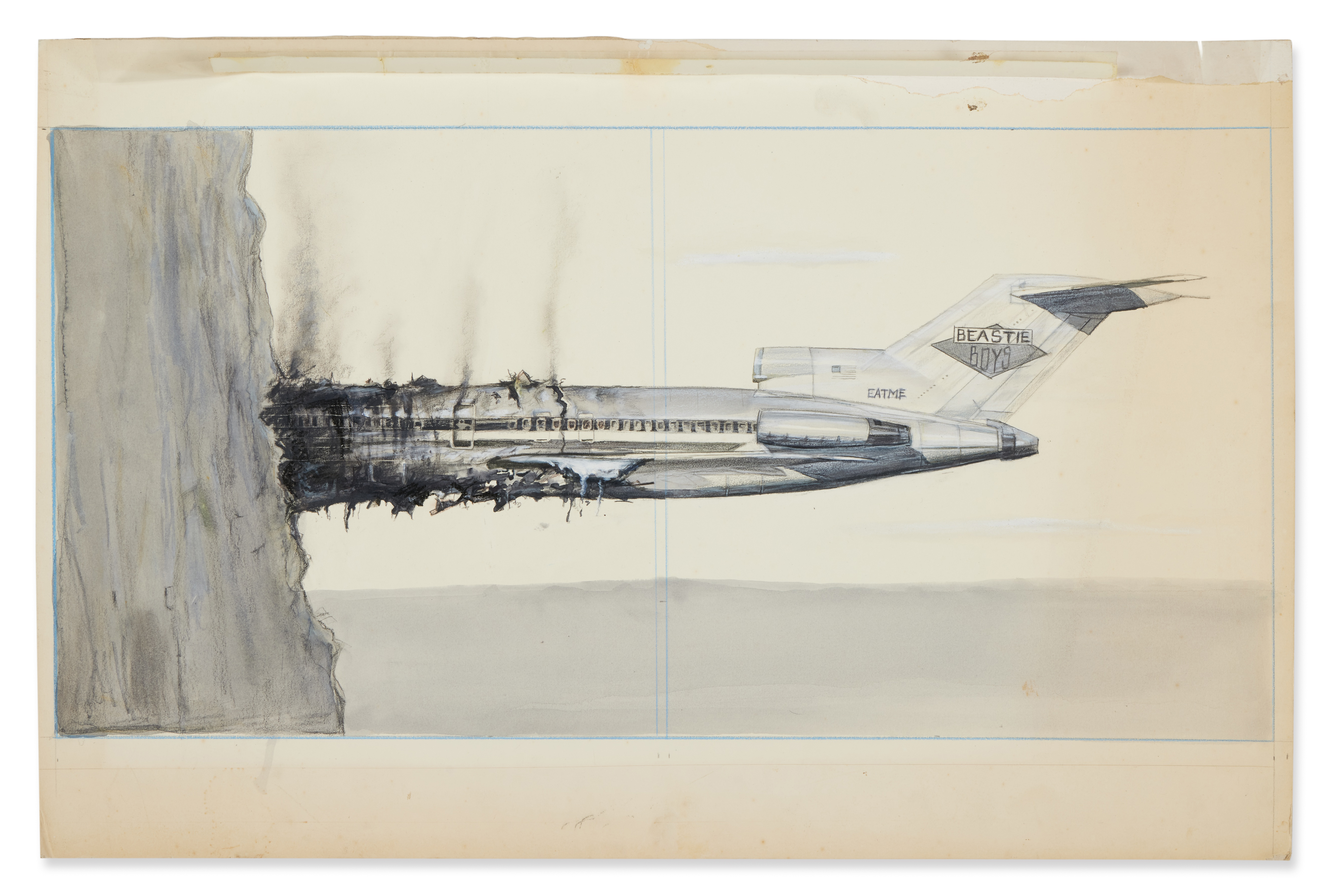 Charcoal, blue pencil, pencil, white Conté crayon and grey wash on Crescent illustration board, taped with acetate sheet and inscribed in brown ink by Stephen Byron on acetate at lower center "Back / front' at upper center and ' Mountain Buckle WE'LL TALK PEACE - S" (presumably Stephen Byram), image 12½ by 25 in. (31.75 x 63.5 cm.), overall 16¾ by 25¾ in. (42.5 x 65.4 cm.), minor discoloration throughout with some damp staining and adhesive residue along extreme upper edge of board.

ORIGINAL CONCEPT ART FOR ONE OF THE MOST ICONIC ALBUM COVERS OF ALL TIME, AND THE FIRST RAP LP TO TOP THE BILLBOARD CHART

The Beastie Boys' debut studio album, Licensed to Ill, is cemented in Hip Hop history as the first rap LP to top the Billboard album chart. Released in November of 1986 by Columbia and Def Jam Records, produced by Rick Rubin, with its now iconic cover artwork created by Stephen Byram and David Gambakle a.k.a World B. Omes, Licensed to Ill has appeared on countless 'Best of' lists since chart-topping inception, including Rolling Stone's "500 Greatest Albums of All Time," Pitchfork's "Top 100 Albums of the 1980s," The Source's "100 Best Rap Albums," and Vibe magazine's "100 Essential Albums of the 20th Century."

The current lot features original concept art rendered in grey tones on illustration board by Gambale for the now-recognizable Licensed to Ill cover showing a Boeing 727 with the group's logo crashing into the side of a mountain. In this version, the original acetate sheet inscribed with Byram's notes is included, indicating the front and back of album sleeve. This is the first time this work has appeared at auction, with provenance going back directly to the artist.

Considered a game-changing album that blended Punk Rock, Rock n' Roll, and Rap, Licensed to Ill showcased the aggressive stylings and master sampling of its three members, Michael "Mike D" Diamond, Adam "Ad-Rock" Horovitz, and the late Adam "MCA" Yauch. Popular singles such as the parodic "No Sleep Till Brooklyn," frat-anthem "(You Gotta) Fight for Your Right (To Party!)," and the outrageously catchy "Girls" ushered in a new sound that cast a wide net over young listeners, particularly those in suburban America who would become known as the 'MTV Generation.'

The final result for the cover was composed of an intricate collage of airplane parts that was then illustrated over with water soluble crayons, a labor intensive effort which would later be appropriated for the cover of contemporary rap artist Eminem's 2018 album, Kamikaze.

Licensed to Ill went Platinum in 1987 and has since sold over ten million copies, becoming certified Diamond by the RIAA in 2015.

Acquired from the above, Private Collection

Acquired from the above, Private Collection