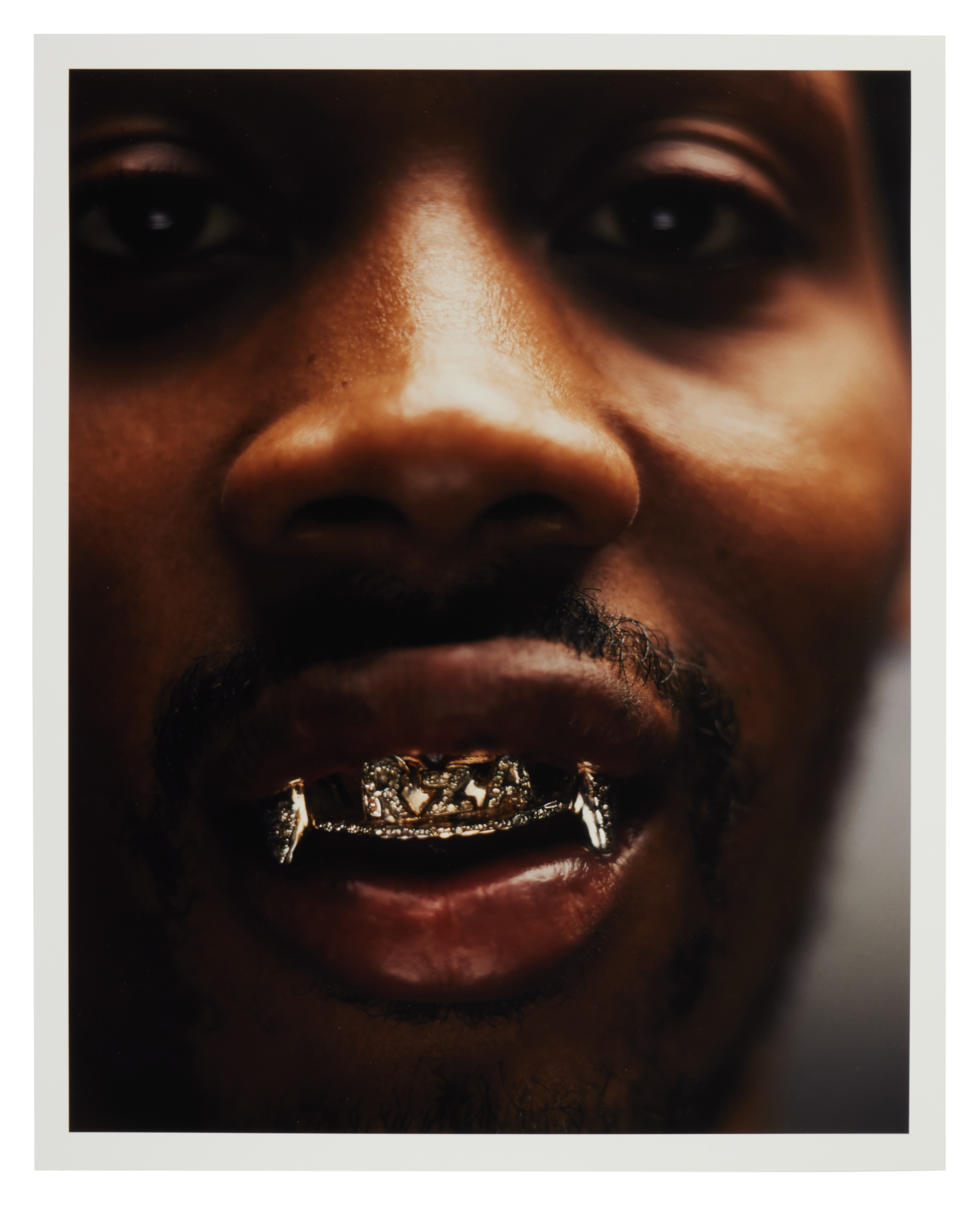 One of an edition of 5, signed by Kwon.

Through her commercial—yet nonetheless intimate—work, Kwon earned the trust of and access to artists like the late Biggie Smalls, Nas, Big Pun, Fat Joe, Jay-Z, A Tribe Called Quest, Eminem, and the Wu-Tang Clan, of which the subject of the current lot, RZA, is the de-facto leader. Kwon reflects about the shoot below, in which a grinning RZA shows off a glittering vampire teeth grill inset with his initials:

"At the time I was experimenting with macro attachments on lenses. I don’t think anyone necessarily loves having the camera a few inches away from their face. But RZA was good natured about it as I explained I was trying to capture the essence of the stunning fronts he had on and that this closeup lensing would achieve it." (Sue Kwon)

The New Yorker reviewed Rap is Risen and Kwon's contributions to the culture in their February 2022 issue in an article titled "When Hip Hop Was Young." Below, writer Hua Hsu sums up what makes Kwon and her body of work with these artists so powerful and so unique:

"What made Sue Kwon one of the great photographers of Hip Hop’s ascension was her innate understanding of the tensions felt by so many of the artists. They were still learning how to dream. Back when everyone, from the artists to the promoters and managers who had arisen around them, was still figuring things out, her subjects were less infatuated with chart-topping pop stardom than with becoming local superheroes. The former seemed distant and impossible; the latter offered a way to craft a new origin story, to represent where they came from, even as they dreamed of going someplace else. In Kwon’s photographs, rappers and d.j.s are imperious one moment, vulnerable and down-to-earth the next, never far from the neighborhoods that made them."

In addition to her hometown of New York City, Kwon's work has been internationally exhibited in Tokyo, Paris, Copenhagen, Modena, and London, and is in the public collections of The Rock & Roll Hall of Fame Museum, the Alex Katz Foundation, the Smithsonian National Museum of African American History and Culture, and the Museum of Fine Arts, Boston. Speaking not only to lovers and devotees of Hip Hop and the explosion of culture and artistry it birthed, Kwon's work is a case study in capturing the intimacy of portraiture and the multi-faceted character of the subject while respecting the world in which she had been granted access.