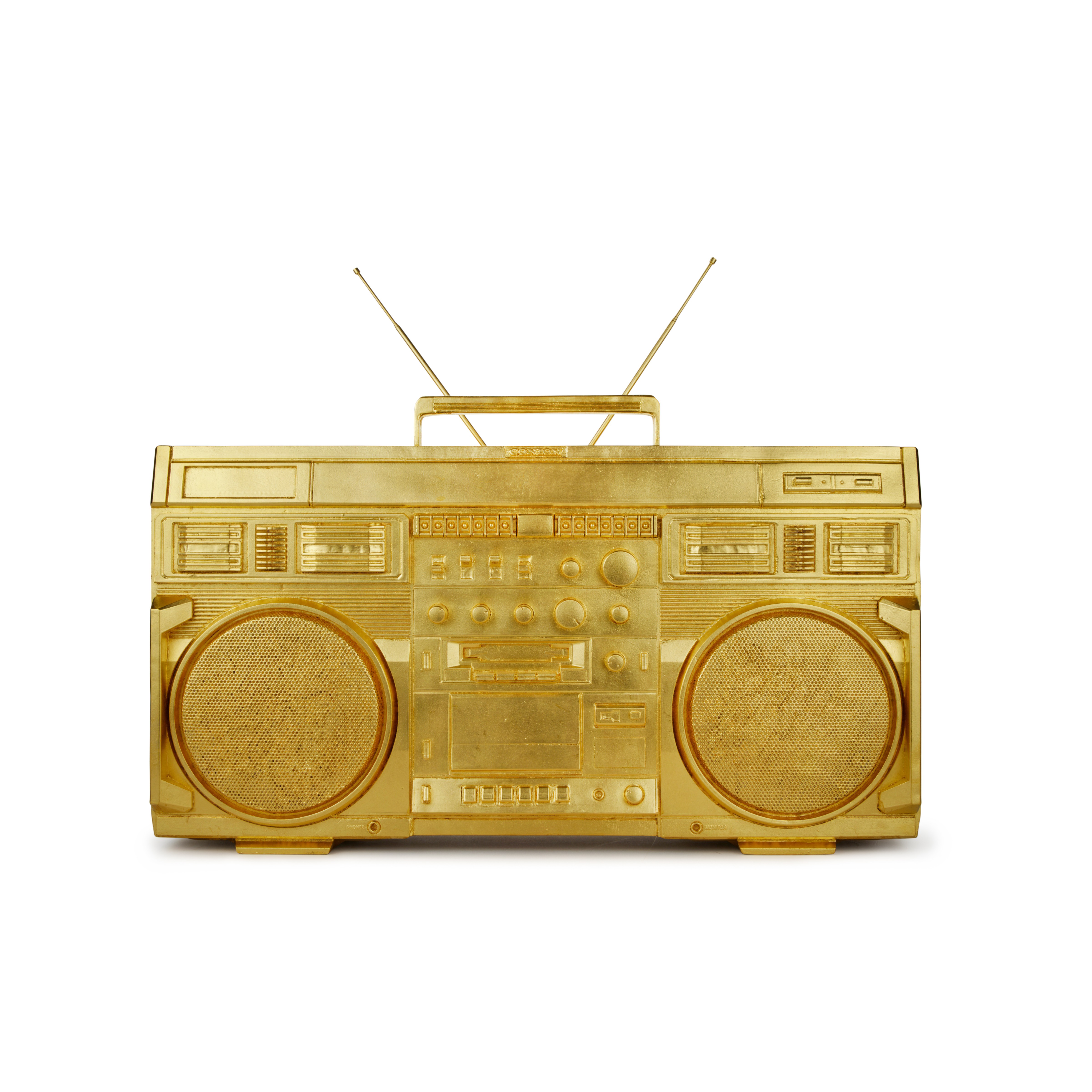 Carlos Rolón is a multi-disciplinary artist who was raised between Chicago and his family's native Puerto Rico. His work explores the themes of spirituality, history, ritual, beauty and craft - enthusiastically presented in the current lot, (Conion Gold). Executed in 2018, this boombox was cast from a Conion C-100F model in Rolón's personal collection of vintage boomboxes. In this example, the sculpture is gilded in 24 karat gold leaf, giving it the regal sheen and coveted color of a ritualistic object or icon. When one considers the lore and continuous appeal of the C-100F, first produced in the 1980s by Cony-Onkyo in Kobe, Japan, the choice to immortalize its now-iconic shape does not appear to suggest camp but rather, an appropriate leveling-up which makes the model worthy of contemplation and respect. The sculpture documents a time and place, as if one were viewing objects from the ancient world.

When it first appeared on the market, the high-quality Conion C-100F was considered outrageous in size, producing a thumping sound and heavy in the 'bells and whistles" department thanks to its multiple knobs, cassette players, and the sheer fact alone that it required ten D-sized batteries and came equipped with its own security system. Advertised under other names such as Helix HX-4365 and the Clairtone 7980, the C-100F found itself coveted by music lovers and music professionals alike. It also cost a pretty penny at the time, around $450-500 which totals around $1,200 in today's money adjusted for inflation.

In urban areas, where boomboxes on the street quickly became a frequent sight, the pejorative nickname of 'ghetto blaster' was bestowed upon the piece of flashy audio equipment - no surprise, given the boombox's influence on the rise of Hip Hop music and its distribution. In the current lot, Rolón takes an object signaling urban disdain - petitions to ban boomboxes from public spaces prevailed during the production's heyday—and turns it on its head as an object worthy of the finest materials, to be admired and enjoyed for its figure alone, not just for what it could—and still continues - to do. Now a highly coveted model among the collecting circuit, the Conion C-100F remains an iconic item from the early aughts of Hip Hop's ascent into the greater public and cultural consciousness.