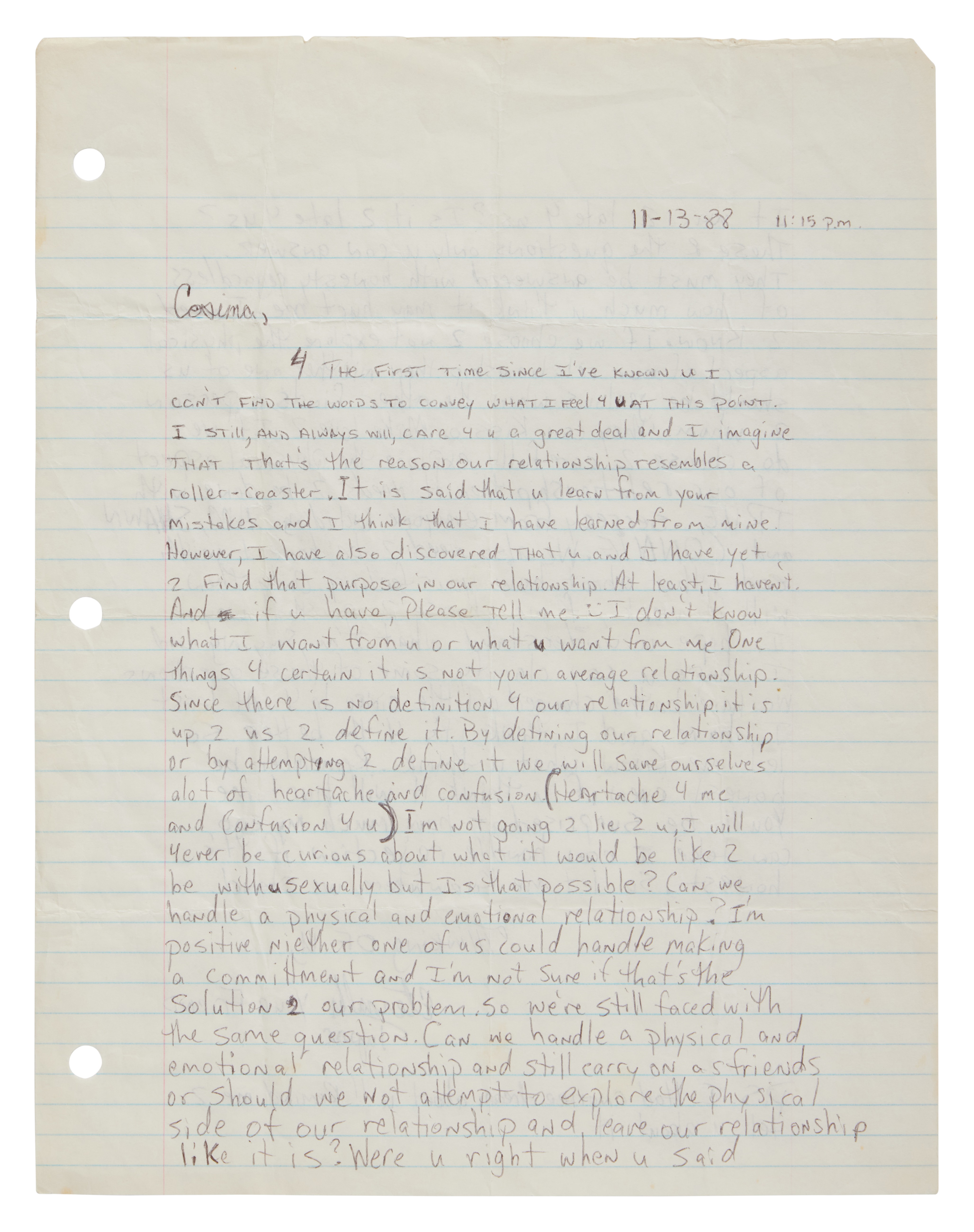 "REMEMBER, BE HONEST EVEN IF U THINK IT WILL HURT ME. YOU'LL BE SURPRISED AT HOW MUCH MY EGO CAN TAKE. I CAN HANDLE REJECTION IF ITS HONEST..."

17-YEAR-OLD TUPAC SHAKUR EXPRESSES NEED TO DEFINE RELATIONSHIP, AT THE RISK OF REJECTION AND LOSS

Cosima, the recipient of the present letter, was a Sophomore and fellow member of the Ensemble Theatre Company. The pair shared a deep connection at this time, just before and in the beginning stages of Tupac's rise to fame, from their first meeting on Cosima's birthday in October 1988, and lasting for approximately 7-8 months. This, and the other letters offered (see lots 101-103 & 104-107) reveal a young man with a tender heart who was fiercely passionate and loved people deeply, who was not afraid to express his emotions and believed in clear communication. His ability to love so deeply and express this love so clearly helps to explain the indelible mark he left on the hearts of those who knew him. A printed program for the Ensemble Theatre Company, which lists both of their names is currently on display at the Tupac Wake Me When I'm Free exhibit in Los Angeles, California.

The present lengthy letter was penned about a month after the pair first met, at a time when the pair began to realize that their relationship could be more than a friendship. Tupac shares in a sincere and clear manner the thoughts going through his mind at the time, revelealing his struggles and worries about their relationship, which he felt "...resembles a rollercoaster...". Tupac shares his confusion about things, stating his desire to "u and I have yet to find that purpose in our relationship. At least I haven't. If you have, please tell me. :) I don't know what I want from u and u don't know what u want from me...." Tupac then asks for them to try and define the relationship, stating "Since there is no definition 4 our relationship, it is up 2 us 2 define it. By defining our relationship or attempting 2 define it we will save ourselves a lot of heartache and confusion (heartache 4 me and confusion 4 u)." The letter reveals yet another facet of Tupac's struggles to balance his strong passions with his fears of loss, as he asks "Can we handle a physical and emotional relationship and still carry on as friends, or should we not attempt to explore the physical side of our relationship and leave our relationship like it is?", before confessing "Is it 2 late 4 us? These R the questions only u can answer. They must be answered with honesty regardless of how much you think it may hurt me. I need 2 know." Tupac closes the letter with the revelation that he does in fact fear a rejection, but that he needs to know where they stand nonetheless "Remember, be honest even if u think it will hurt me. You'll be surprised at how much my ego can take. I can handle rejection if its honest...."