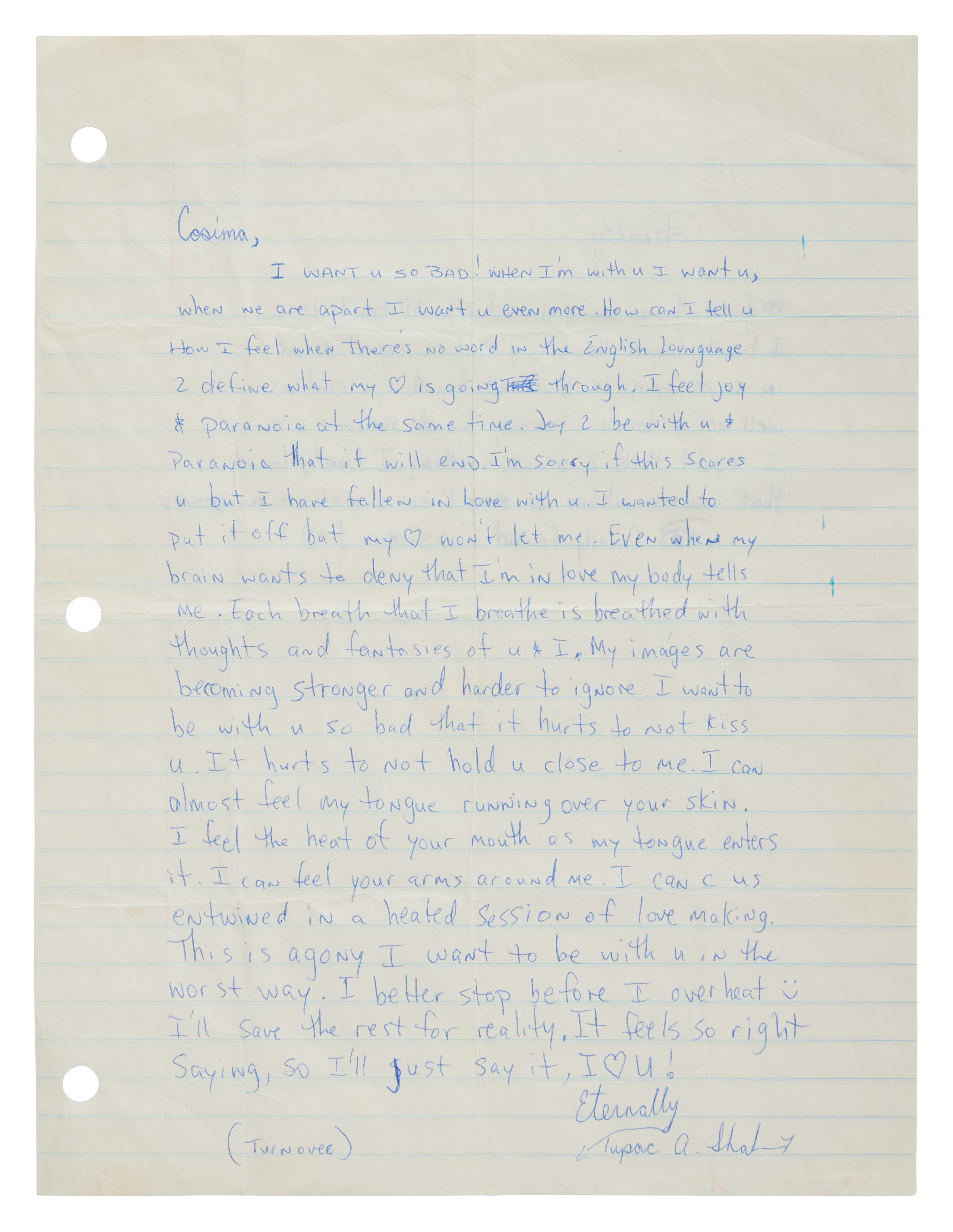 "How can I tell u how I feel when there's no word in the English language 2 define what my ♥ is going through. I feel joy & paranoia at the same time. ... I'm sorry if this scares u but I have fallen in love with u.... I want to be with u so bad that it hurts to not kiss u... I can almost feel my tongue running over your skin... It feels so right saying, so I'll just say it, I ♥ U!"

Cosima, the recipient of the present letter, was a Sophomore and fellow member of the Ensemble Theatre Company. The pair shared a deep connection at this time, just before and in the beginning stages of Tupac's rise to fame, from their first meeting on Cosima's birthday in October 1988, and lasting for approximately 7-8 months. This, and the other letters offered (see lots 101-103 & 105-107) reveal a young man with a tender heart who was fiercely passionate and loved people deeply, who was not afraid to express his emotions and believed in clear communication. His ability to love so deeply and express this love so clearly helps to explain the indelible mark he left on the hearts of those who knew him. A printed program for the Ensemble Theatre Company, which lists both of their names is currently on display at the Tupac Wake Me When I'm Free exhibit in Los Angeles, California.

The letter demonstrates the fierceness with which Tupac felt his emotions, contrasted with some of the anguish he felt at the possiblity of losing this newfound love "I feel joy & paranoia at the same time..." The unpublished poem written on the verso of the present letter is titled "Finally," and expresses the deep longing Tupac had to find someone who could not only be a friend and lover, but a true confidante. Written in the spring of 1989, when Tupac was attending Steinberg's poetry workshops, it is embellished with what was a signature style of Tupac's, using pictograms in place of words, in this case, a drawing of an eye in place of the pronoun "I". It reads, in part:

References: An image of this letter will be reproduced as part of an upcoming book about Tupac Shakur by his Estate.