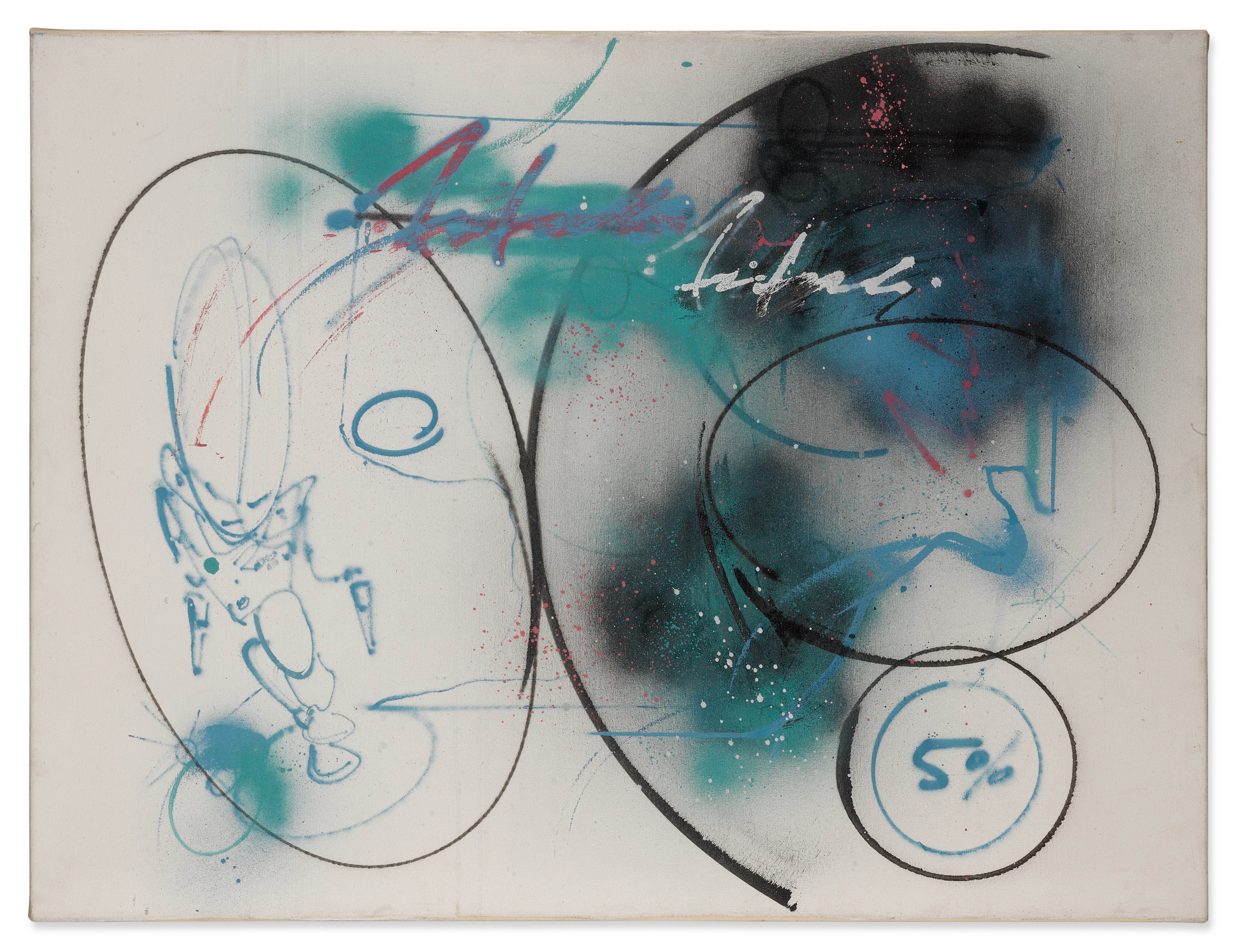 Aerosol paint and ink on canvas (91.4 x 121.9 cm.), signed, titled, dated and inscribed to verso of canvas "Futura2000. 5% Solution. January ’83. For the Rock Steady King! ‘Crazy Legs.’ From your friend always." Some areas of discoloration and minor staining along each extreme edge of the canvas, some surface soiling.

Created by FUTURA as a personal gift for the famed b-boy, Crazy Legs, the current lot is one of the earliest known works by the legendary graffiti artist to come to market. Dating from 1983 and titled 5% Solution as a nod to Legs' then-affiliation with the Black Nationalist Five-Percent Nation, the work features a dancing figure of what is known as his signature "Pointman" motif, one of his earliest known uses of the figure, as well as atomic design elements married with abstraction, two FUTURA trademarks.

Zig-zagging in hues of teal, green, white and black, the work is as dynamic and playfully executed as the breakers FUTURA was known to paint alongside during demonstrations, most notably on the 1982 New York City Rap tour with the Rock Steady Crew, of which Crazy Legs was a notable member and FUTURA was official artist. The inscription en verso to the canvas solidifies the connection between these two impactful figures in the world of Hip Hop, both of whom were instrumental in exposing a larger audience to the burgeoning art form.

FUTURA—who also went by FUTURA 2000 as indicated by the current lot—began his graffiti career painting trains in the 1970s. He went on to exhibit at Patti Astor's famed Fun Gallery alongside his contemporaries, Keith Haring, Jean-Michel Basquiat and Kenny Scharf, in good company with those explosive talents who would come to define the age.

Since his foundational days of tagging, FUTURA has now enjoyed cross-over commercial success as a frequent design collaborator with some of the world's most iconic brands, most notably BMW, Nike, Uniqlo, and Hennessy. His work continues to argue for the elevation of graffiti into the realm of fine art, a significance he played no small part in during the early aughts of the genre's birth alongside the evolution of Hip Hop as a full-blown cultural movement. In addition to New York City, his work has been internationally exhibited in solo shows in Strasbourg, Paris, Amsterdam, Monaco, Barcelona, Moscow, Venice, Australia, and Copenhagen, and is in the permanent public collections of Museo de Arte Moderna Bologna, the Musée de Vire in France and the Museum of the City of New York.