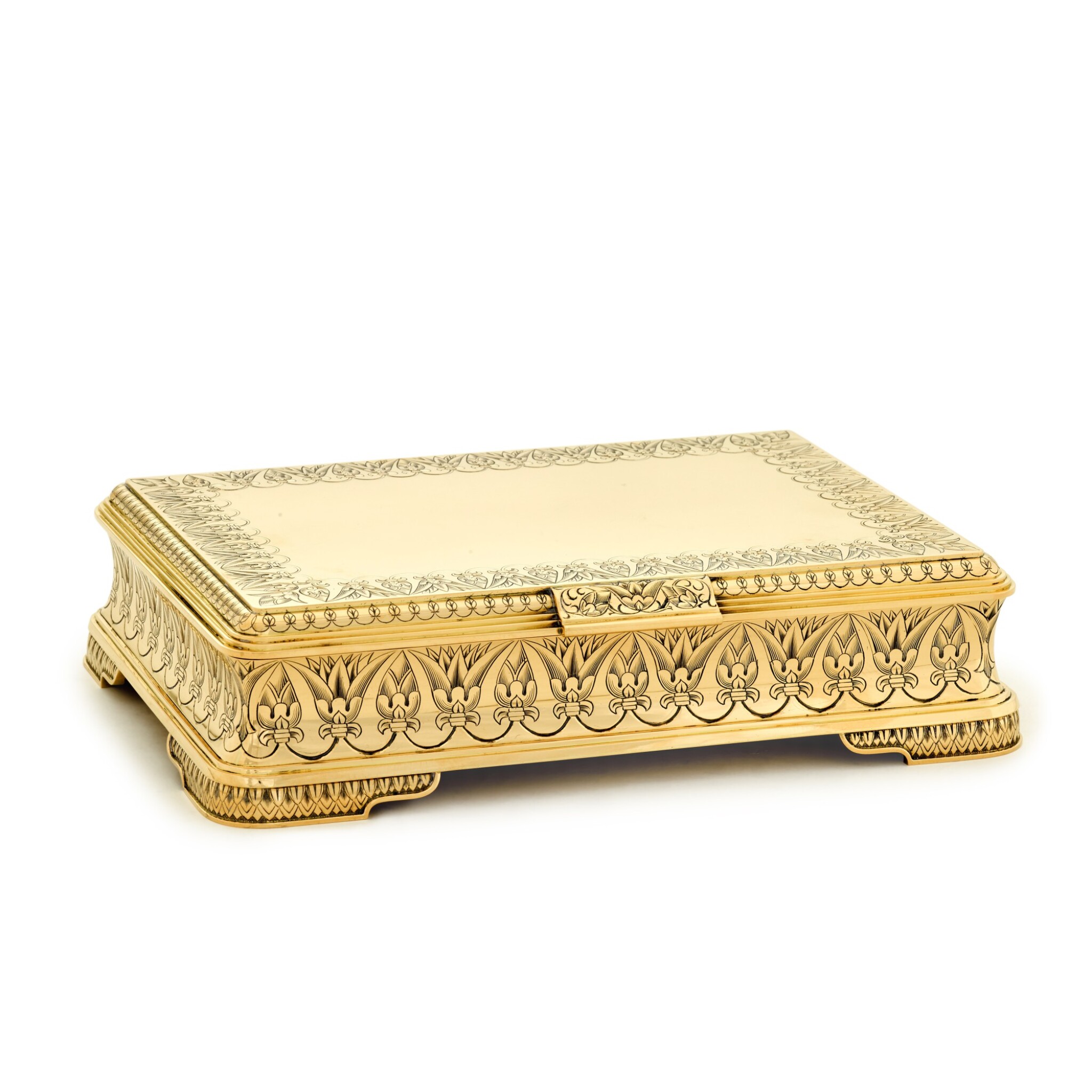 Clear hallmarks. Minor scratches to the lid. A tiny chip out of the wood divider.

Please note that the W symbol has been removed from this lot. This lot will remain in New Bond Street after the sale.
The designer J.E. Barber worked for Asprey of New Bond Street during the 1950s and ‘60s, where he came under the influence of Algernon Asprey (1912-1991). The latter, a great grandson of Charles Asprey (1813-1892) and one of the directors of Asprey, had joined the old family firm in 1933 as a designer of gold, silver and leather goods. In the 1950s he was instrumental in developing a market for exclusive goldsmiths’ work and leather in the Middle East. As one of the Asprey team, Barber’s designs were probably developed, at least in part, with this lucrative new outlet in mind, as this present box amply demonstrates. Its fine workmanship, coupled with the fact that both the designer’s and craftsman’s names are acknowledged, suggests that it was among the firm’s most luxurious creations. The inclusion of the names, as was required, also suggests that the box was submitted for Purchase Tax relief.

The adverse financial climate in the United Kingdom during the two decades following the end of World War II saw Purchase Tax on non-essential goods rise at times to 120 per cent; for a while gramophone records, for instance, were the subject of triple tax. This had a throttling effect on many manufacturers and craftsmen and was most keenly felt in the goldsmiths’ trade which was in steep decline. The Design and Research Centre for the Gold, Silver and Jewellery Industries was therefore set up at Goldsmiths’ Hall in London with the support of the Council of Industrial Design to select objects deemed worthy of Purchase Tax relief because of their good design and workmanship. This was finally abolished in 1963.1

Several other boxes designed by J.E. Barber for Asprey have been noted, including a compact in silver with two colour gold flower motif, London, 1950, which appears to have been selected for tax relief and which is now in the collection of the Goldsmiths’ Company, London. This compact was chosen for a travelling exhibition in 1955 of Modern Silver which was well attended in London, Birmingham, Edinburgh, Sheffield, Bristol, Manchester and Hull. Barber’s compact was also shown as representative of United Kingdom design and craftsmanship at the British Trade Fair in Copenhagen in 1955.2

Sotheby’s is grateful to the Librarian, Goldsmiths’ Hall, for information included in this footnote.