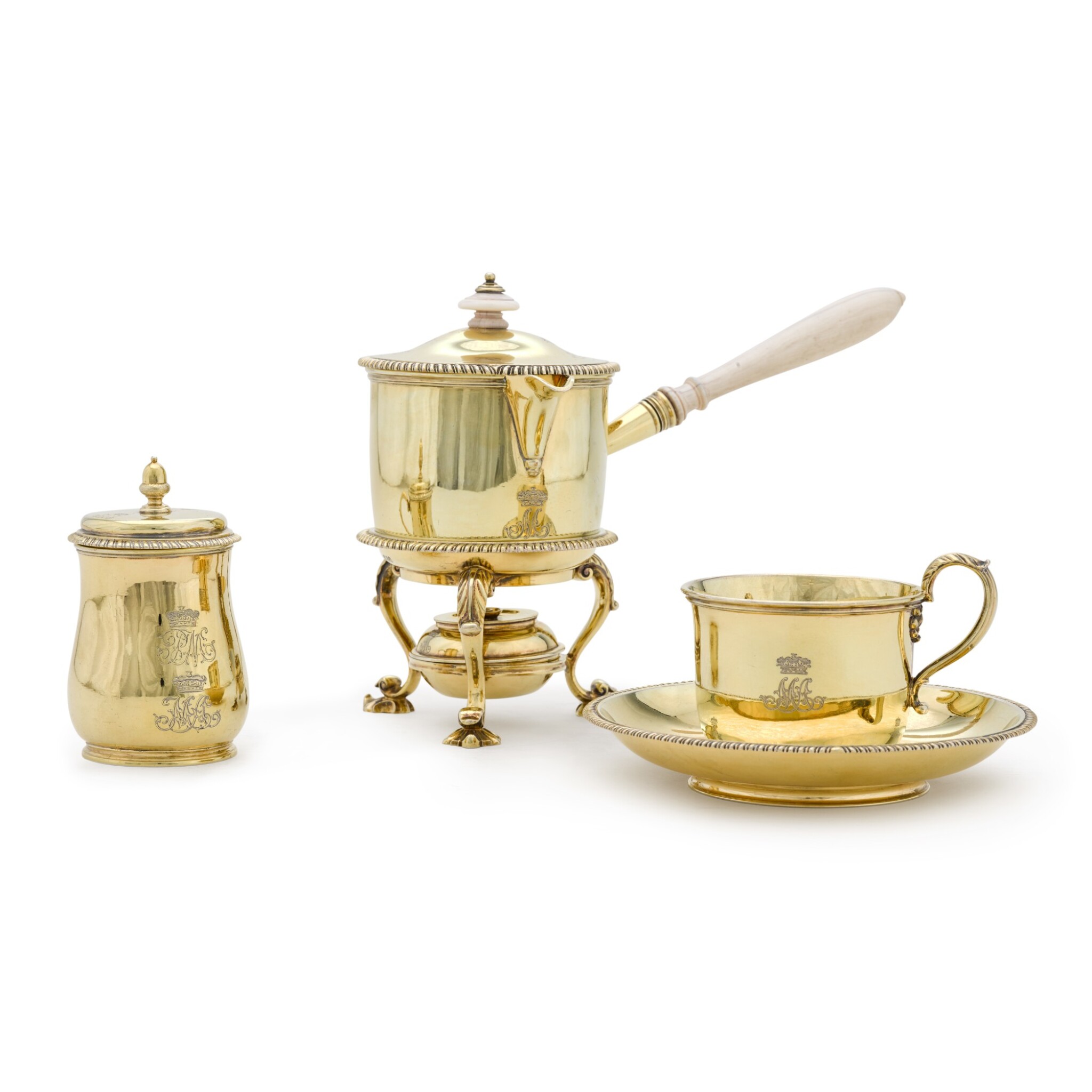 The saucepan with ivory handle and knop, the mug with acorn finial, all pieces with gadroon rims and all engraved with the initials PM and MA below royal crowns.

This lot contains ivory. Commercial trade in ivory is regulated by multiple governments and international organisations around the world, including through prohibitions, restrictions and licensing and / or registration requirements. Different regulations apply to buyers, depending on their individual circumstances and the relevant auction / sale. Sotheby's therefore recommends that, before taking any action in relation to a potential purchase or handling of an ivory item, buyers obtain advice on the regimes and requirements applicable to them. Sotheby's will also not conduct any applications for buyers for exemption certificates, CITES licenses, registrations or similar that may be required, including the renewal or update of the same, or arrange for import or export permits needed for international shipping. A buyer's inability or delay to obtain necessary documentation, or lawfully arrange the export or import of the lot will not justify sale cancellation or a delay in payment. Please note that the W symbol has been removed from this lot. This lot will remain in New Bond Street after the sale.
A lady of title, Christie's, London, 30 January 1980, lot 202;
Sotheby's, London, 24 April 1986, lot 1487

The name of Princess Mary first occurs in the Jewel Office accounts less than a month after her birth, when on 22 May 1776, a warrant was issued for providing her with a coral. In the Plate Book just two days later, the piece appears as ‘A Coral Princess Mary – Itm. Reced one Coral set with gold with proper Ornaments £16.6.0.’ Designated for the ‘Royal Nursery,’ it was delivered ‘to Mrs Anne Hubbuck by order of the right Honble. Lady Charlotte Finch,’ governess to George III’s children, on 25 June 1776. Similarly, the warrant for Princess Mary’s ‘Gilt Cup,’ the first item in this lot, was dated 2 December 1776; it appears in the Plate Book as ‘Itm Reced one gilt Mug and Cover wt. 8Oz 7 at 11.3d p oz £4.17.5.’ and was ‘Delivered to Mr Robt. Hownan by Order of The Lady Charlotte Finch for the use of Her Royal Highness Princess Mary’ on 30 December 1776.1

Princess Mary, Duchess of Gloucester, and Princess Mary Adelaide, besides being aunt and niece, god-mother and god-child, were on particularly affectionate terms. According to a friend, Mrs. Dalrymple (a daughter of Lord Napier and Ettrick), the Duchess ‘was deeply attached to her god-child, and often gave little entertainments at the house in Piccadilly in honour of the Princess’s birthday.’2