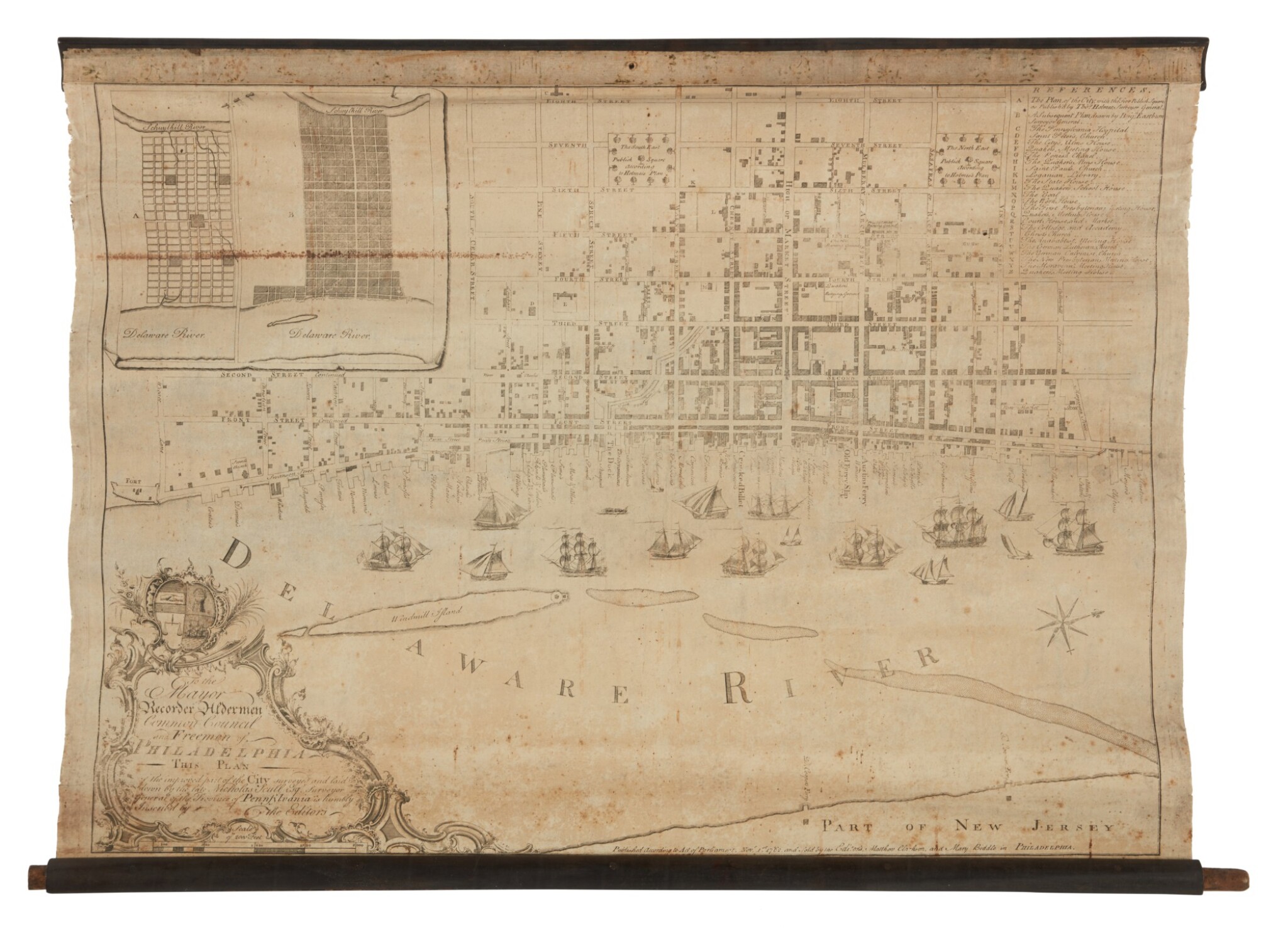 To the Mayor Recorder Aldermen Common Council and Freemen of Philadelphia This Plan of the improved part of the City surveyed and laid down by the late Nicholas Scull Esq. Surveyor General of the Province of Pennsylvania is humbly inscribed by The Editors. Philadelphia: Sold by the Editors Matthew Clarkson & Mary Biddle, 1 November 1762

Engraved map (20 x 27 1/4 in.; 508 x 692 mm), scale ca. 1:4900, 17 ships in the Delaware River (including a laden rowboat and 2 dinghys, inset map of two earlier street plans A & B in upper left, list of references in upper right, cartouche and scale in lower left, laid down on contemporary linen, top edge attached to and bottom edge inserted in an old (perhaps contemporary) roller; soiled, spotting in lower corners and across the inset map, some light abrasion.

"The first detailed map of the interior of the city ... completes his great contribution to Philadelphia iconography" (Snyder).

Nicholas Scull (1700–1762) began making surveys in 1722, and after serving as elected sheriff of Philadelphia for three years, was commissioned in 1748 as surveyor general of the province. Thomas Penn (1702–1775) along with his brothers, as proprietors of the province, purchased land around Philadelphia for the city's expansion, and Scull's duties were to survey the new lands and plot the roads. His prior cartographic achievements were the regional view of the city and its surroundings, done in collaboration with George Heap (1752), and his large-scale view of the Philadelphia harbor, the East Prospect (1754).

The large number of spaces in the city still requiring houses appeared graphically for the first time in the present map. His work in Philadelphia had allowed him to compile detailed surveys of streets and lots, and he had largely completed the map at his death in 1761. The publication was carried on by his daughter and executrix Mary Biddle while Matthew Clarkson did the engraving (the contract between them for this work, signed 7 October 1762, is at the Library of Congress).

The map was printed by subscription and appeared 11 November 1762. It provided great detail, outlining each building in the improved area, recording the exact locations of numerous institutions for the first time, and was the first map to locate and identify all the streets and alleys as well as the sixty-five public and private docks occupying the waterfront.

The inset maps reproduce the plans of Thomas Home (1683) and Benjamin Eastburn (ca. 1733–1741, never published and only recorded here). They appear here because the city's public squares were intensely controversial at this time, as Thomas Penn's right to sell a part of the northeast square to the Lutheran church in 1741 was questioned, as was the disposition of another portion to the Pennsylvania Hospital and another part to private ownership. The Common Council required "that the Publick Squares laid down in the original Plan of the city, be so described that the Claim of the Inhabitants of the said City may not be prejudiced." The inclusion of the two plans was Clarkson's response to that stricture.

The map was copied in British, French, and German reproductions of the whole or part during the American Revolution, as well as later in the nineteenth century. A great rarity, we have located only five copies in public institutions: Historical Society of Pennsylvania (2 of which one is defective); Library Company of Philadelphia; New York Public Library, Stokes Collection; Washington D.C., Library of Congress. The copy recorded at the State Library in Harrisburg is actually a facsimile.