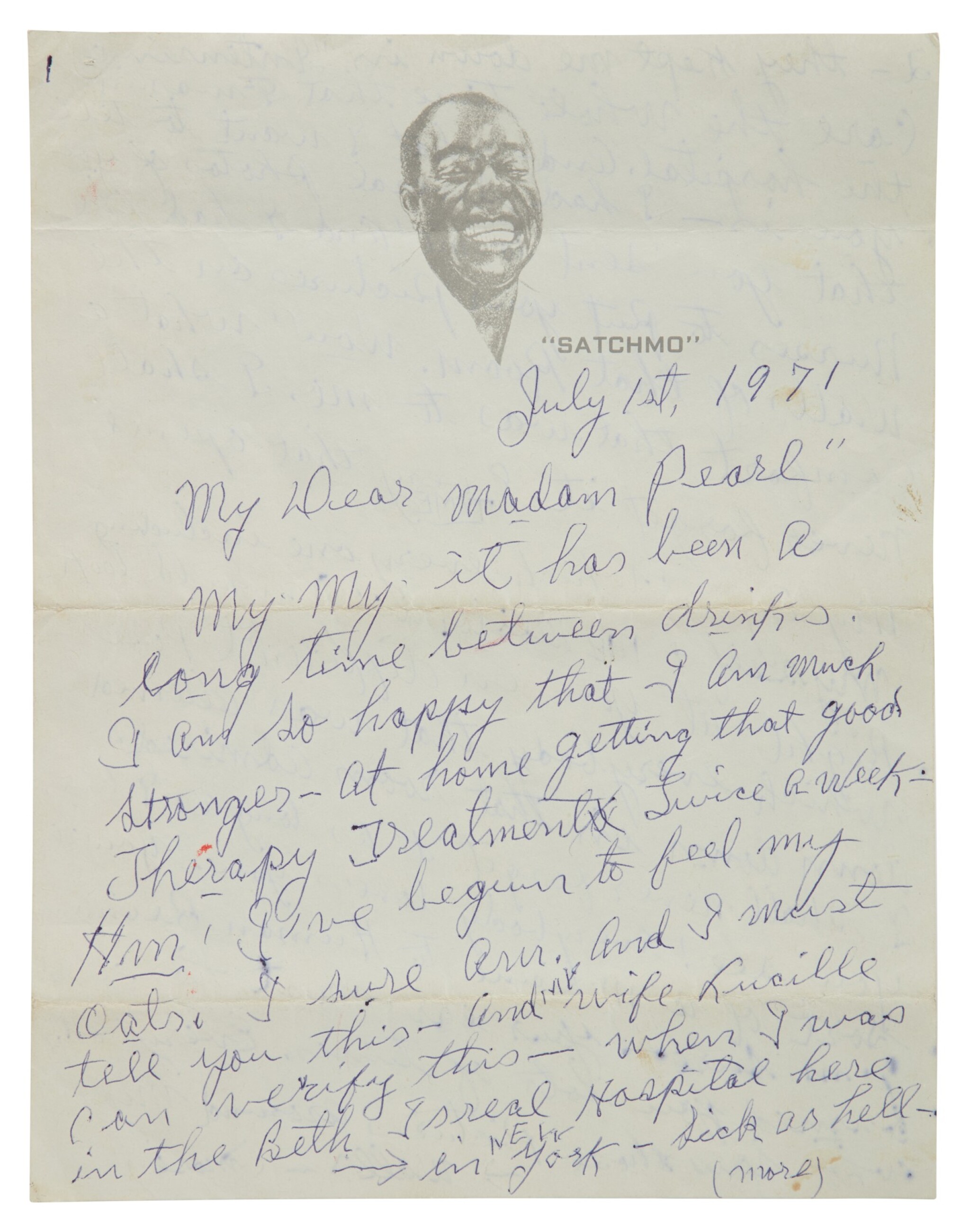 A warm and intimate letter written shortly after Armstrong had been released from the hospital following a heart attack. Full of his trademark enthusiasm, the letter gives little hint that Armstrong would die of another heart attack just five days later. Earlier in 1971, Satchmo had been a guest on the first episode of Bailey’s television variety show, The Pearl Bailey Show; it was one of his last public appearances. Bailey served as one of the honorary pallbearers at Armstrong’s funeral in Flushing Cemetery.

“My My it has been a long time between drinks. I am so happy that I am much stronger—At home getting that good Therapy Treatment Twice a week. Hm! I’ve begun to feel my oats. And I must tell you this—and my wife Lucille can verify this—when I was I the Beth Israel Hospital here in New York—Sick as hell—they kept me down in ‘Intensive Care[’] the whole time that I was in the hospital. And what I want to tell you is—I had several photos of you that you sent to me and I had the Nurses to put your pictures on the Walls of that Room. Wow, what a comfort that was to me. I shall never forget it. … You see? Everybody love’s you. You’re sort of a Medicine to Human Beings.”

Armstrong writes that the worst thing about being in Intensive Care was that “They didn’t have no music at all … which was a Drag.” But once he was moved to a private room “among the VIP patients,” Armstrong began to feel better. “That’s when I realized that I am still alive, and began to live, with a great big room full of Flowers and lots of mail and present[s] from all over the world. Three private nurses around the clock. Three delicious meals every day (Which I ate like a dog). Oh yea! I never did lose my appetite no matter how sick I was.” Not surprisingly, Satchmo continues on the theme of food: “Always loved Jewish food ever since I was a little boy going to School in my home town, New Orleans. My Mother was working for a very lovely Jewish family, and I used to go on her job and she fixed me a lovely Jewish dinner. Motsa Balls & All.” In fact, Armstrong lived with this “lovely Jewish family,” the Karnoffskys, as a boy, and he wore a Star of David throughout his life to honor them.

As he continued to improve, Armstrong got permission from his doctor to continue his routine of having “one Soul Food day once a week” and taking “my Swiss Kriss every night when I turn in.” He claims that in short order he quickly converted the nurses and other patients to Swiss Kriss; “Lucille had to bring Loads down to me and I would Issue them out.”

After Armstrong’s previous hospitalization Lucille surprised him with a Tandberg stereo, but he writes to Bailey that his homecoming gift this time was even better. Lucille “had Bought that big beautiful Lot right next door to our Home. I’ve been trying to buy the Lot for nineteen years.” Lucille also had a patio and wet bar built on the lot, as well as having it landscaped. “When I got home from the Hospital and saw all these ‘goodies[’] going for me—‘Honey—it Hung’ me.”

In closing, Satchmo asks after Bailey’s husband, the drummer Louis Bellson: “How is my little man ‘Belson[’]? Give him a beeg hello for Lucille and I. He live those Drums but beautifully. I have quite a few of your Albums. Lov Em All. Especially the Riske one. Hm. Dem beeg woids are gonna bust my vest yet.” In closing, Armstrong sends his best regards to Cab Calloway and the rest of the touring company of Hello, Dolly! and wishes Bailey happiness “and lots of success always. … Thanks Again for everything. From your Boy Satchmo.”