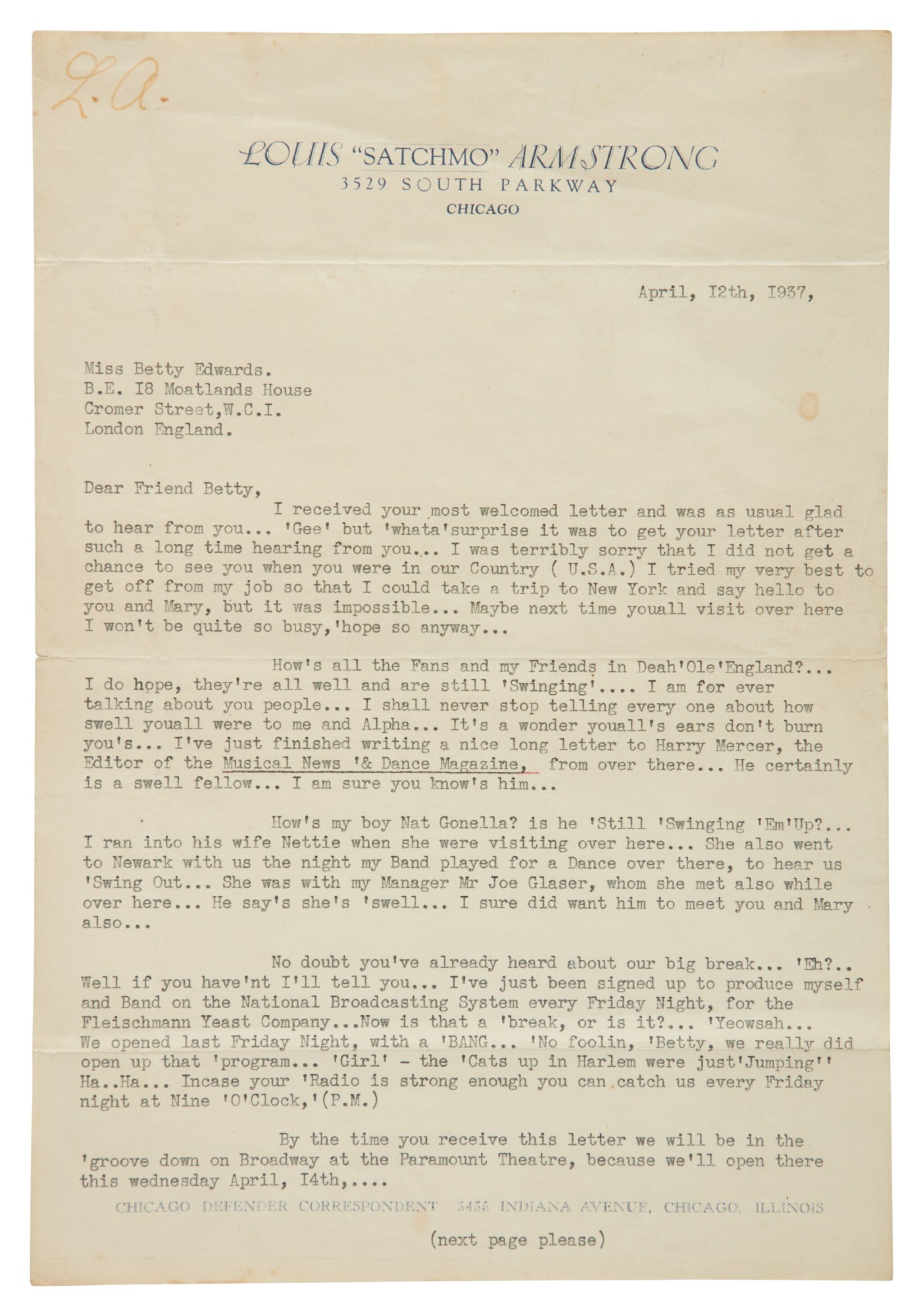 A typically exuberant, but unusually discursive, missive from Satchmo, touching on his fondness for London, his career and touring, his friendship with Bing Crosby, and—inevitably—his diet and weight.

Armstrong begins by reminiscing about a recent tour of England with his soon-to-be wife, Alpha Smith: “How’s all the Fans and my Friends in Deah’ Ole’ England? … I do hope, they’re all well and are still ‘Swinging’. … I am forever talking about you people… I shall never stop telling every one about how swell youall were to me and Alpha.” Armstrong also asks about the English jazz trumpeter Nat Gonella, wondering if he is “‘Still ‘Swinging ‘Em ‘Up?,” and mentioning that he had introduced Gonella’s wife, Nettie, to his manager, Joe Glaser, when she came to see Armstrong play a dance in Newark. [Please note: ellipses in quotations reflect Armstrong’s idiosyncratic typing, not elisions in the text.]

Armstrong also shares news about a “big break” in his career: “I’ve just been signed up to produce myself and Band on the National Broadcasting System every Friday Night, for the Fleischman Yeast Company…Now is that a ‘break, or is it?… ‘Yeowsah… We opened last Friday Night, with a ‘BANG… ‘No foolin, ‘Betty, we really did open up that ‘program… ‘Girl’—the ‘Cats up in Harlem were just ‘Jumping’ Ha..Ha… Incase your ‘Radio is strong enough that you can catch us every Friday night at Nine ‘O’Clock, ‘(P.M.).” By the time you receive this letter we will be in the ‘groove down on Broadway at the Paramount Theatre, because we’ll open there this Wednesday April, I4th,.…”

Betty Edwards had told Armstrong that she had seen the 1936 musical comedy film Pennies From Heaven, and Armstrong gives her some background on the movie. “I am glad to know that you enjoyed Pennies From Heaven… I was really thrilled to have the chance to play in a film with my Pal Papa Bing Crosby. He’s such a swell fellow…He’s Natural… The kind of people I like’s to be around… When they were Casting Pennies from Heaven out in Hollywood, Papa Bing told those Big Shot Executives that he wanted Louis (Satchmo) Armstrong to be his Comedian in that picture and no one else… And believe me Betty, ‘that was ‘that… ‘Nice ‘Eh?… I am already signed up to do another picture with him, some time in July or August…” Armstrong may have been grateful to Crosby, but the singer often acknowledged his debt to Satchmo. Crosby “adapted what he had learned from Armstrong and from jazz into his own style. … Crosby was indelibly tied to a jazz aesthetic through his inherent sense of swing and his great appreciation (and emulation) of Armstrong’s genius for vocal phrasing, spontaneity, emotion, and comedy” (Gary Giddins, Bing Crosby: A Pocketful Of Dreams, The Early Years 1903–1940).

Before closing by admonishing Betty Edwards to “keep Swinging until ‘Gabriel Blows His ‘TROMBONE,” Armstrong reports on the struggles that both he and Alpha are having with their weight despite their daily use of a laxative. Armstrong admits that he is “afraid to go on one of those strenuous diets on account of I am afraid it might make me a little too weak to blow my trumpet, and I really do need my strength, a hard as I am working these days… Over there in England I only had to do two shows a day, which was very ‘Mello” Indeed… But over here they think’s nothing of putting four and five shows a day with a midnight show thrown in.”