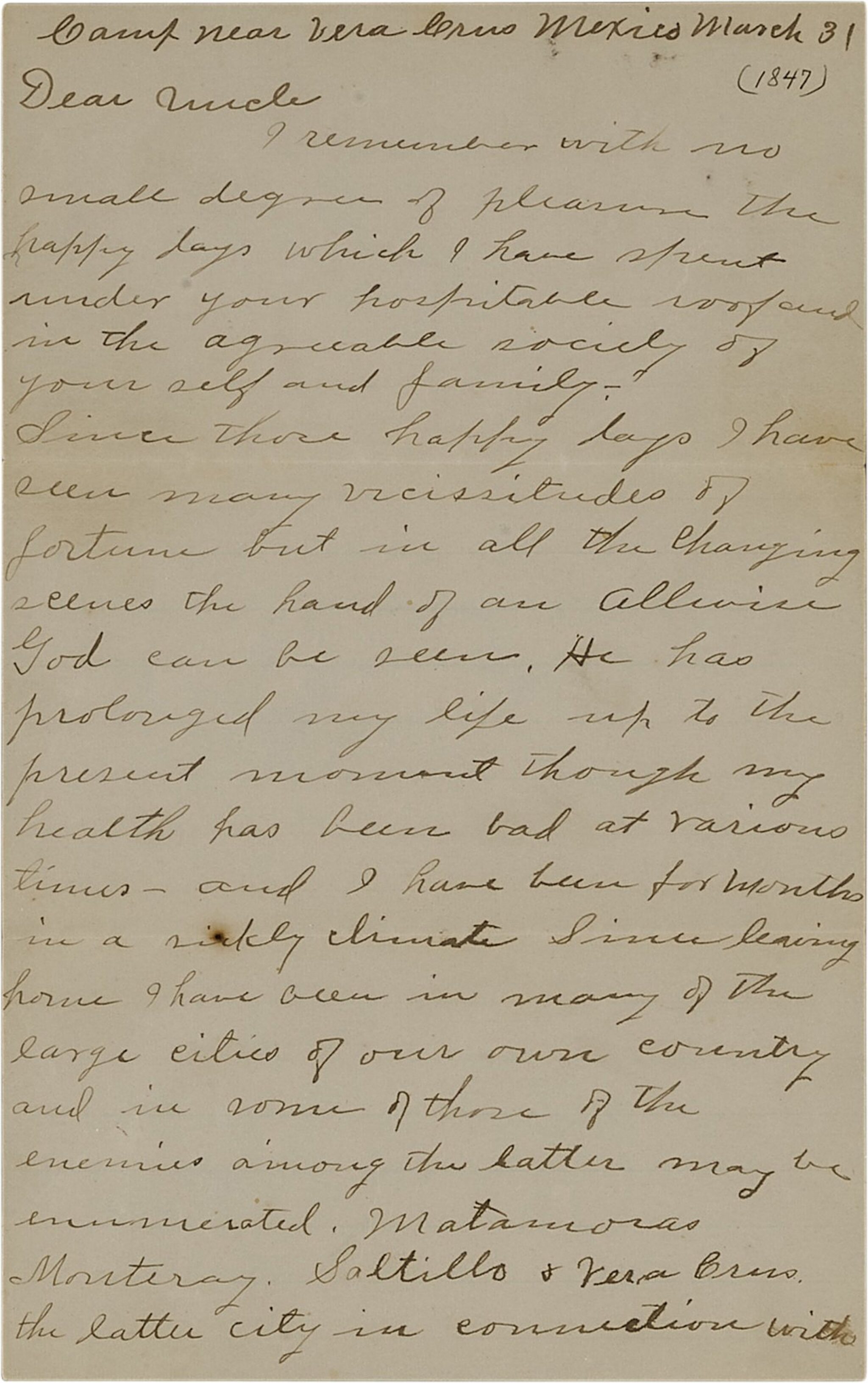 Writing to his uncle by marriage, Jackson begins his letter with a warm reminiscence of the days before the Mexican War: "I remember with no small degree of pleasure the happy days which I have spent under your hospitable roof. … Since those happy days I have seen many vicissitudes of fortune but in all the changing scenes the hand of an Allwise God can be seen. He has prolonged my life up to the present moment though my health has been bad at various times. … Since leaving home I have been in many of the large cities of our own country and in some of those of the enemies among the latter may be enumerated Matamoras, Monteray, Saltillo & Vera Crus."

The young artillery officer then embarks on an extensive narrative of the successful Siege of Veracruz, led by Winfield Scott. "The latter city … surrendered to us after a long siege, we landed on the 9th of this month near the city, and on the same night the enemy commenced their fire on us which was kept up with occasional intermissions until we had so bombarded and cannonaded them as to induce them to surrender which they did the day before yesterday giving up their arms, and all public property themselves retiring into the interior with the understanding that they should not again take up arms against us during the present war.

“Troops at present occupy both town and castle—the town is of immense strength being surrounded on one side by a wall about 10 feet high and forts extending around the gulf of Mexico and on the gulf side is defended by the castle itself which is a large fortress of the strongest character and the works are so strong that it is impossible for a man to approach the town without being exposed to the fire of cannon. … our loss is small not exceeding in my opinion 20 men killed. But the loss on either side is not accurately known we had two captains killed one of the artillery and the other of the infantry.”

Jackson appends a brief report on the Battle of Buena Vista, concluded the previous month: “General Taylor has obtained a great victory over General Santa Anna but sustained a loss in killed and wounded of about 700 men. The Mexican army appears to be in a very distracted state.”

In concluding, Jackson returns to the familial theme that opened his letter. “I hope I again shall be allowed the privilege of meeting with yourself and family before the lapse of many years—but I cannot think of it before the close of the present war.” He closes with a postscript, signed with initials, requesting Brake to “be particular not to allow any part of this or any other letter from me to be published.”