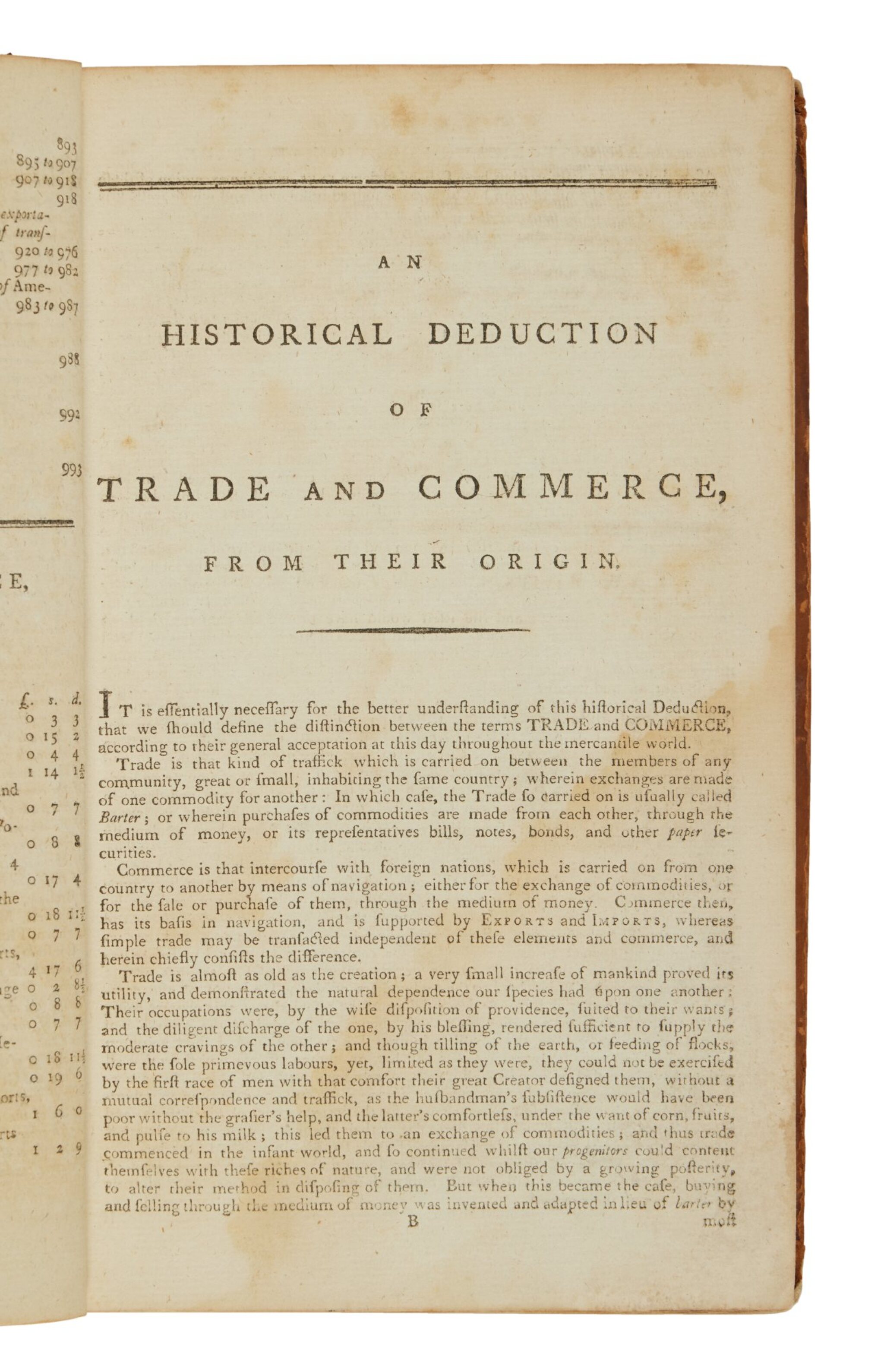 [Wyndham Beawes. Lex mercatoria rediviva; or, A Complete Code of Commercial Law: Being a General Guide to All Men in Business; Whether as Traders, Remitters, Owners, Freighters, Captains, Insurers, Brokers, Factors, Supercargoes, or Agents. With an Account of Our Mercantile Companies; Our Colonies and Factories Abroad; Our Commercial Treaties with Foreign Powers; the Duty of Consuls, and of the Laws concerning Aliens, Naturalization, and Denization. To which is Added, a Sketch of the Present State of the Commerce of the Whole World; Compiled from the Works of the Most Celebrated British and Foreign Commercial Writers. Considerably Enlarged and Improved. Dublin: Printed for John Rice, College-Green; And sold by H. and P. Rice, No. 50, Market-Street, Philadelphia, 1795]

Vol. 1 only (of 2), 8vo (241 x 152 mm); the sixth edition. Lacks all preliminaries before advertisement leaf (including title-page), and all after S1 at end, dampstaining and light browning throughout. Contemporary calf, smooth spine, morocco label, blind-stamped letter "H" to center; worn with losses to spine and corners, spine and text-block split down the center, hinges reinforced with cloth tape. Half blue morocco slipcase, chemise.

An important association copy from the law library of Alexander Hamilton, bearing his signature and those of two of his sons. Hamilton's introduction to commerce began at the tender age of eight in 1765, when he clerked for his mother's shop in Christiansted, St. Croix. After his mother's death in the early winter of 1768, young Hamilton went to work in Christansted at the import/export firm of Beekman and Cruger, both native New York merchants. In a very short time, he rose from clerk to manager, keeping the firm's books, dealing with ship captains, planters, merchants, Customers and suppliers, and buying and selling profitably on behalf of his employers. It was perhaps at Beekman and Cruger's that Hamilton, an avid and informed reader, first familiarized himself with Beawes's indispensable work on British commercial law.

At any rate, Lex mercatoria was certainly part of his syllabus at King's College, New York, where he matriculated in 1773—for he liberally quoted from the work in his famous second pamphlet, The Farmer Refuted (1775). In 1781 in a letter to Pickering, Hamilton asked for a copy of Lex mercatoria which he needed in order to compose an important letter to Robert Morris regarding the restoration of the colonies' credit and credibility in the eyes of foreign nations. Hamilton later purchased another edition of the work, which he in turn gave to Philip, his eldest son. Philip was graduated from King's College in 1800 and immediately embarked upon a regimental reading of the law laid out by his rather. Challenged to a duel after an argument that involved disparaging remarks about his father, Philip was fatally wounded on the heights of Weehawken in 1802. Later that year, Elizabeth Hamilton gave birth to another son. The youngest boy inherited his deceased brother's name, as well as his volume of Lex mercatoria.

Please note that the description has been updated to reflect that the spine and text-block have split.