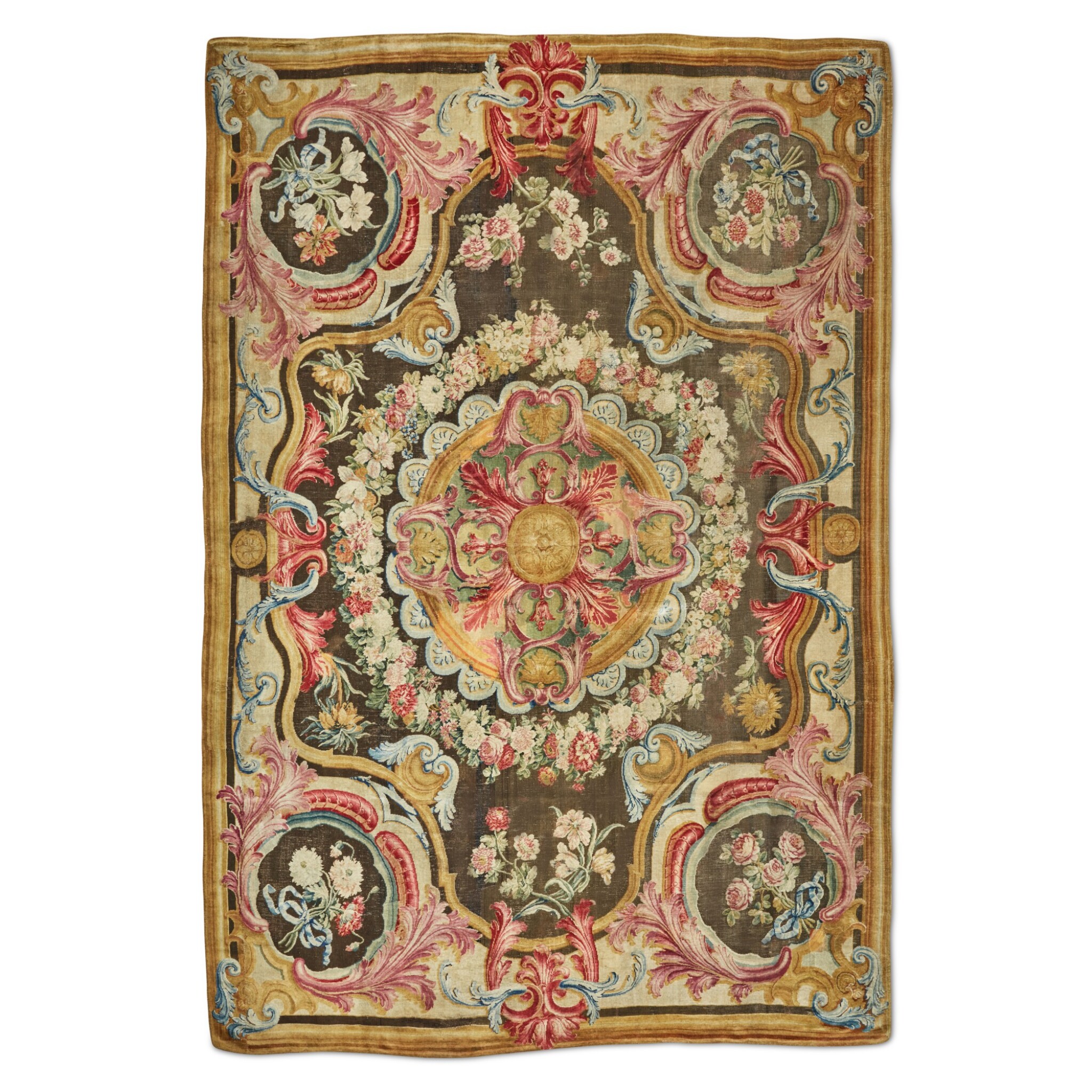 In restored condition commensurate with age. A rare survival with good vibrant, near original color. Small slits scattered throughout due to fragility of foundation, the largest in the central cartouche approx. 5 in., and numerous repaired slits throughout. Pile generally 1/8 in. closely sheared with dark brown, oxidized, and now with re-piling. Three large rewoven areas in the central cartouche, now faded, and smaller scattered rewoven areas. Re-joined with losses along one longer edge. Scattered spot stains. Fabric backing sewn to the reverse and cloth tape sewn to all four sides. Backing showing water stains. Will enhance with cleaning and careful restoration.

This extremely rare carpet is an 18th-century weaving of the Savonnerie factory model no. 369, an example of which was delivered to the Cabinet intérieur du Roi at Versailles on 19 August 1766. The model itself dates to circa 1745, and a watercolour design attributed to Perrot survives in the Bibliothèque Nationale [HA-18 (3)-FOL] (illustrated in Verlet, p.106 fig.61).

The first recorded version was delivered to the Royal Garde-Meuble in 1745 as part of a long-standing project to cover the flagstone floor of the chapel at Versailles with specially commissioned carpets. Queen Marie Leszcynska received a carpet à bouquets de fleurs liées d'un ruban for the Chapelle de la Vierge, described in the inventory as:

The dimensions were given as long de 4 aunes 1/6 sur 2 aunes 15/16 de large, which correspond to the size of the offered lot [1 aune equated approximately to 1.19m] and appears to have been the standard size for the factory's moyen tapis format. In the same year an identical carpet was delivered to the Chapelle de la Vierge for the use of Mesdames, Louis XV's unmarried daughters. The design was clearly favoured by the King as further examples were produced during his reign, including one for Madame de Pompadour at the Château de Bellevue and the 1766 order for Versailles that was placed in the King's cabinet d'angle, arguably the most prestigious location in the château because it served as the monarch's personal study for which he had commissioned the royal cabinetmaker Jean-François Oeben in 1760 to create the celebrated bureau du roi, one of the most important pieces of French furniture produced in the 18th century and only completed by Riesener in 1769.

Pierre-Josse Joseph Perrot (1678-1750), member of the Académie de Saint Luc, was a painter, ornamental draughtsman and designer of stage sets and ephemeral décors who worked for the Menus Plaisirs under Jean-Baptiste II Bérain and from 1724 for the royal Gobelins and Savonnerie manufactories. The latter had been established in 1615 in a former soap factory in the village of Chaillot, then on the Western edge of Paris. From the outset its mission was to provide knotted pile carpets made in the Turkish and Levantine manner for the use of the Court in its interiors and as diplomatic gifts, and during the reign of Louis XIV it was charged with the unprecedented commission of supplying 93 carpets to cover the entire length of the Grande Galerie of the Louvre. For over a century the factory was administered by the Dupont family, but in 1742 control passed to the still-life painter Pierre-Charles Duvivier (1716-1788) and his sons. During his tenure the workshops specialised in producing decorative carpets in three sizes as well as tapestry panels for screens and seat coverings.

Pierre-Josse Perrot's first major project was to design a carpet for the throne room at Versailles in collaboration with Jean-Baptiste Blin de Fontenay in 1725, and in 1735 he designed the carpet for the King's dining room at the Château de la Muette (Cleveland Museum of Art; ill. Verlet p.103 fig.58). Both works hark back to the late baroque style of the Louis XIV period incorporating strapwork, cornucopia, bold shell motifs, acanthus clasps and royal emblems. The composition for the bouquet de fleurs model derives from Perrot's 1739-1740 design for a carpet for the King's dining room at Fontainebleau, the pen and chalk cartoon for which survives in the Savonnerie archives (ill. Verlet p.107 fig.63), and which shares a similar central medallion with acanthus rosette surrounded by floral sprays, although the four corners maintain the strapwork shell clasps and fleur-de-lis reminiscent of earlier designs. In contrast, the fluid sinuous borders and floral bouquet cartouches of the offered model, along with the absence of royal emblems, demonstrate that by 1745 Perrot had fully embraced the lighter and more decorative aesthetic of the mature rococo style prevalent at the time, which likely accounts for the design's perennial appeal into the second half of the century.

Few moyens tapis à bouquets de fleurs have survived to this day. One formerly in the collection of the Vicomtesse Vigier was sold Paris, Palais Galliera, 3 June 1970, lot 159, and was acquired by Versailles to replace their version that had left the château during the Revolution; this is now in the model's original position in the Cabinet d'angle along with the bureau du roi. Another example is in Moise de Camondo's bedroom in the Musée Nissim de Camondo, Paris, and a third was sold Paris Drouot, Marc Ferri, 7 July 1992 lot 175. More recently, a further example was sold Christie's London, 10 December 2009, lot 600 (GBP 577,250). In the absence of documentation it is impossible to ascertain which if any of these would correspond to the actual carpets delivered to the Royal Household in the eighteenth century. A moyen tapis of Perrot's Fontainebleau Dining Room model was sold Christie's London, 9 July 2014, lot 27 (GBP 602,500).