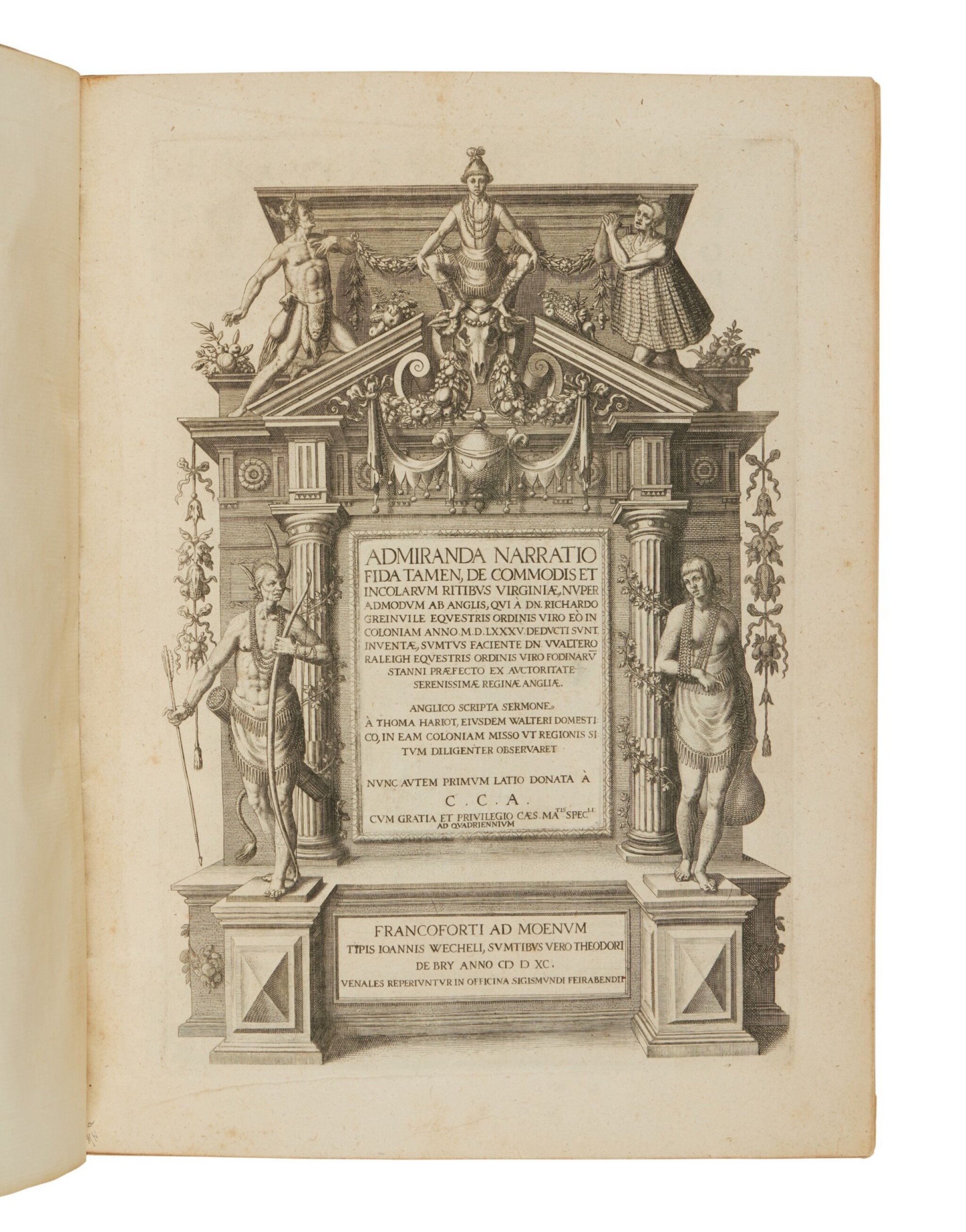 Folio (321 x 240 mm). Engraved title surround, dedicatory arms of Maximilian I of Bavaria, engraved head- and tail-pieces, title to plates, Adam and Eve plate and double-page map of Virginia by Theodor de Bry after John White, 27 plates, 1 of which folding, blank leaf following plate XXIII; pencil in margin of A3, A4, and B1 not affecting print, plate XVIII with some minor restoration at head and tiny chip to outer margin, neither affecting print, mild dampstaining to outer margin of [F-F2] not affecting plate. In full limp vellum. Housed in an archival box.

First edition, first issue of the Latin edition of Hariot's Virginia. This volume was the issued as the first part of Theodor de Bry's extraordinary "Great Voyages," which sought to describe the exploration of the New World. Sabin notes that this esteemed first part is "the rarest volume of that series" (30377). Thomas Hariot's text, the first description of Virginia and North Carolina, was first published in London in 1588 (only six copies are known) and here republished in Latin. Hariot, like the artist, John White, was part of the Roanoke expedition and wrote his account from direct observation. The map which accompanies the volume is the first considerably accurate map of the Virginia coast and Carolina capes, showing the coast from the mouth of the Chesapeake to Wilmington, North Carolina; it has been called "one of the most significant cartographical milestones in colonial North American history, [and] the most accurate map drawn in the sixteenth century of any part of that continent" (Burden 76).

John White's illustrations are among the most famous of early American images. White was the lieutenant-governor of the colony and a skilled artist. His carefully executed watercolors, gleaned from close observation and remarkably accurate renderings of the Carolina Native Americans' customs, attire, rituals, and dwellings, are here expertly engraved by de Bry. No other artist so-carefully rendered Native Americans until Karl Bodmer worked on the Missouri in the 1830s. In addition to these illustrations, there are plates showing White's conception of the ancient Picts of Scotland, to whom he wished to compare the American natives.

According to Sabin plates V, VI, IX, and XV are in their second state, while the others are in their first state; the engraved title is the same as that in the Church copy of the first issue; according to Burden, the map of Virginia is the second state. In the face of these variations one is reassured that “after having consulted a considerable number of copies, which had remained in their ancient binding,” M. Sobolewski, the Russian collector, as quoted by Sabin, concluded that “the two impressions [or issues] of the first edition are always to be found mingled ... and that it is impossible to decide the question of priority.”