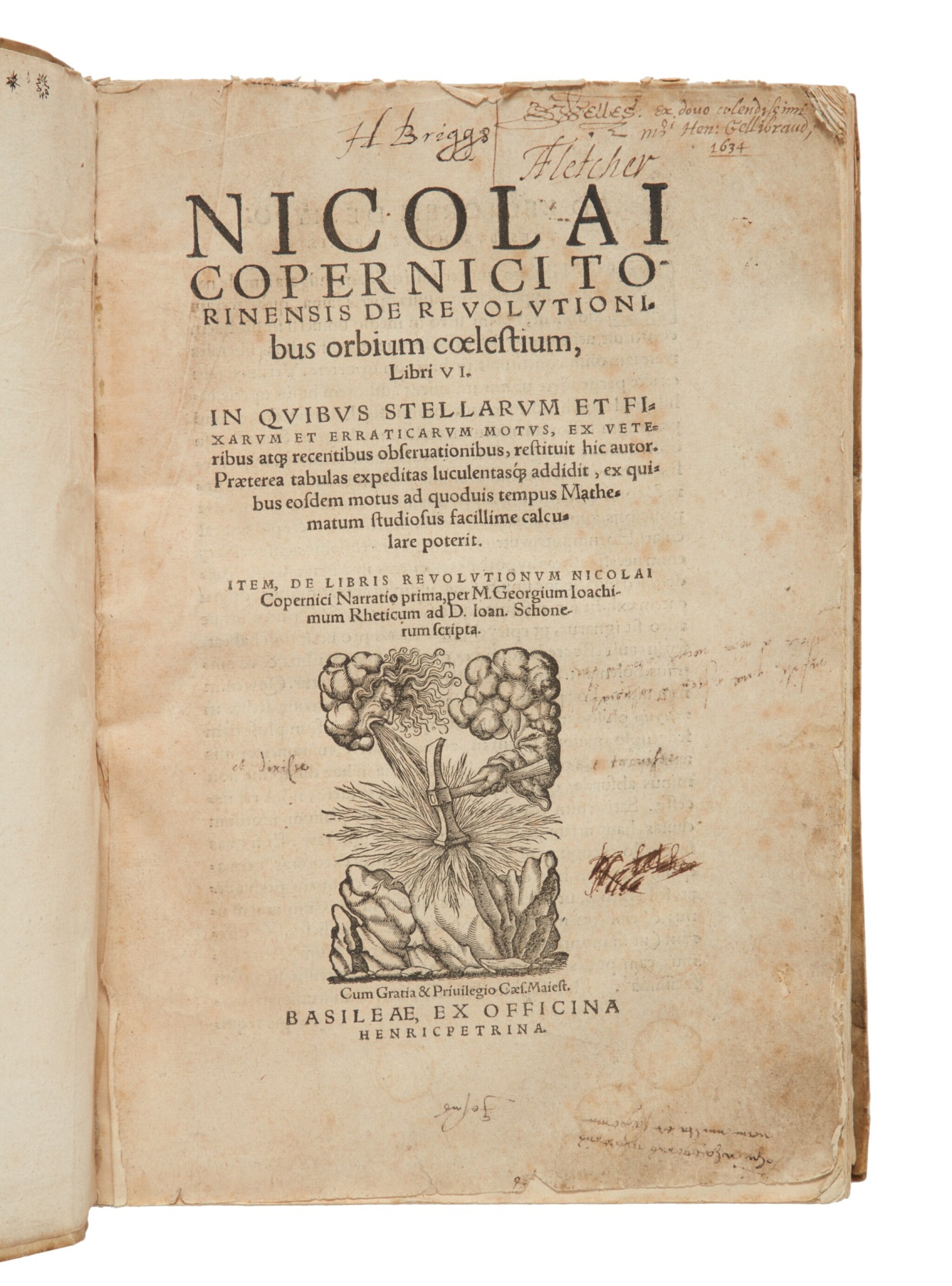 Second edition, but the first to incorporate the Narratio prima of Copernicus's disciple Georg Rheticus. First published in Danzig in 1540, De libris revolutionum … Nicolai Copernici … narratio prima was the first printed announcement of Copernicus’s heliocentric theory of the universe, abstracted by Rheticus. Copernicus "was indisputably the first great astronomer of modern times; the first to assign the Earth its proper planetary status and the first to provide a scientific justification for placing the sun near the center of the known universe. He initiated a revolution, not only in astronomy but also in physics, by ascribing the Earth a circular motion. … Copernicus may have used the geometrical devices of his Greek or Arab predecessors, yet his system, and the perception of the cosmos it established, was entirely novel" (Hilfstein).

This second edition of De revolutionibus is a virtual page-by-page reprint of the 1543 Nuremberg first edition—even the errata that were enumerated on a leaf inserted in some copies of the first edition were not corrected. And Andreas Osiander's anonymous (and unauthorized) preface was retained, although it presented Copernicus's work as a strictly hypothetical system invented as a convenient calculating device that could well be false even if the Copernican system was consistent with astronomical observations.

One difference between the first and second editions is due to the publication in 1551 of Erasmus Reinhold's Prutenicae tabulae coelestium motuum. The title-page of the first edition of De revolutionibus noted "in this work … you have the motions of the fixed stars and planets, as these motions have been reconstituted on the basis of ancient as well as recent observations, and have moreover been embellished by new and marvelous hypotheses. You also have most convenient tables, from which you will be able to compute those motions with the utmost ease for any time whatever" (Nicholas Copernicus On the Revolutions, trans. Edward Rosen). But, as described by Owen Gingerich, Reinhold's work was so successful in expanding the Copernican tables into a handier form that the 1566 edition of De revolutionibus "omits the advertisement on the title page but adds a testimonial from Reinhold himself: "All posterity will gratefully remember the name of Copernicus, by whose labor and study the doctrine of celestial motions was again restored from near collapse. … [H]e found and explained much which from antiquirty till now was either unknown or veiled in darkness" ("Erasmus Reinhold and the Dissemination of Copernican Theory," in The Eye of Heaven, p. 221).

This is a significant association copy, with distinguished later provenance, signed and annotated by two seventeenth-century English Copernican scholars and Gresham professors: Henry Briggs and Henry Gellibrand. Briggs was the first professor of geometry at Gresham College and put Napier's logarithims onto base 10 in Arithmetica logarithmica sive Logarithmorum chiliades triginta (1624). He also published an edition of the first six books of Euclid's Elements in 1620. Gellibrand was chiefly interested in mathematical navigation, and he attempted to solve the problem of longitude, as well as completing Briggs's trigonometric tables. But he is best remembered for his discovery of magnetic declination, published in A Discourse Mathematical on the Variation of the Magneticall Needle (1635). This copy of Copernicus was given by Gellibrand to another friend and colleague, John Wells, a practical mathematician specializing in dialing; he published The Compleat Art of Dyalling. Plainly Demonstrating, Out of the Sphere, How to Project Both Great and Small Circles, Upon any Plane Whatsoever in 1637.

In the description of this copy in his census, Gingerich records "Annotations, mostly numerical and scattered over 80 pages between f. 13 and f. 206, by both Briggs (in a soft gray ink) and Gellibrand (in a crisp black-brown ink). The book was presumably rebound by Gellibrand because there are pairs of half-sheets with numbers in his hand interleaved in much of the star catalog, and also an earlier long annotation (presumably by Briggs) is trimmed on f. 184v. On f. 70 there are two mean motions, one marked H Bri and the second H Gell in Gellibrand's hand. A paper is joined onto the diagram on f. 91v to allow for two additional epicycle pairs. On c2 are 7 lines of text and quantities mentioning Tycho four times. At the end there is a manuscript list of numerical errata."