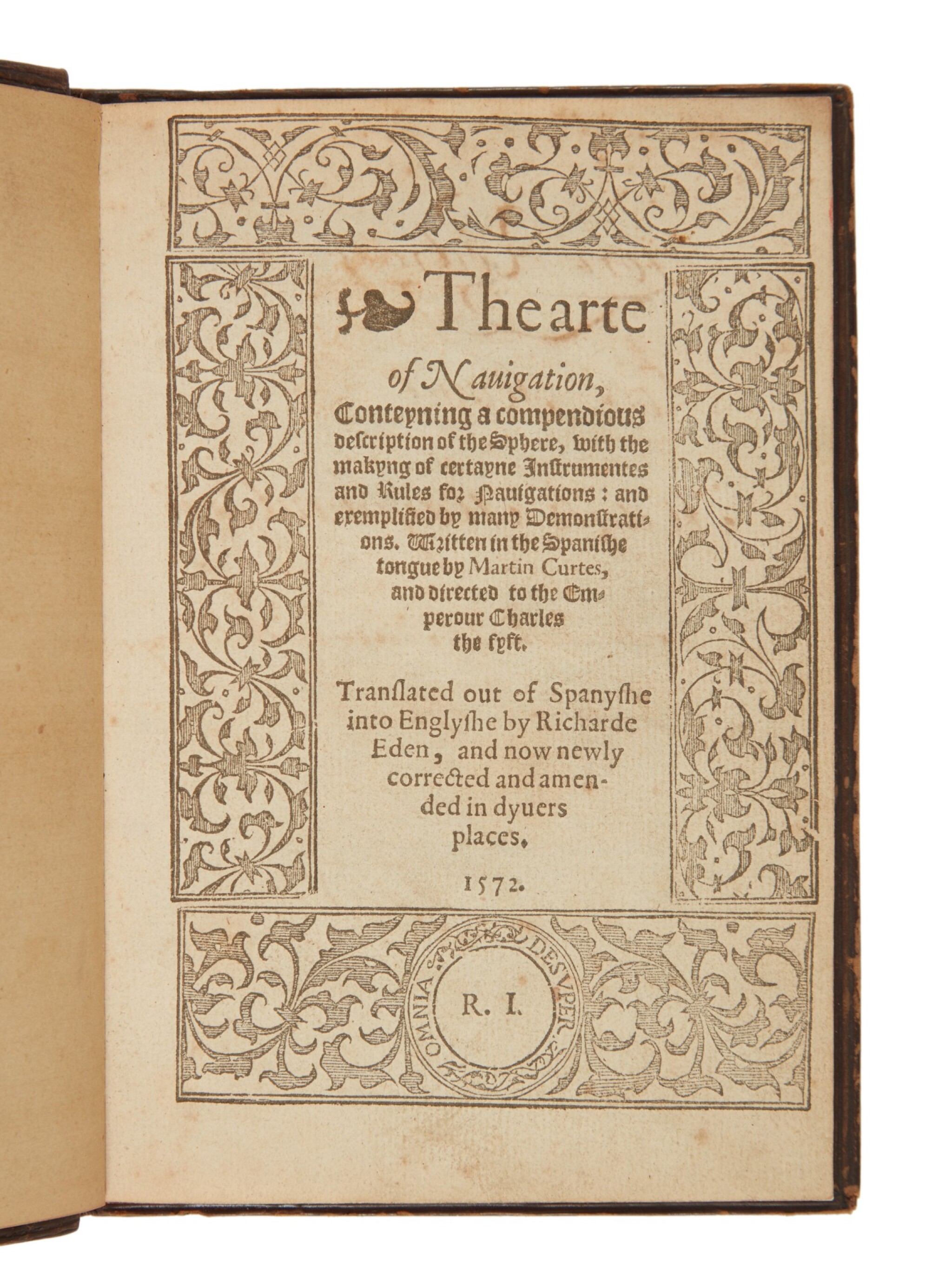 The Arte of Navigation, conteyning a Compendious Description of the Sphere, with the Makyng of Certayne Instrumentes and Rules for Navigations: and Exemplified by Many Demonstrations. Written in the Spanishe Tongue by Martin Curtes, and Directed to the Emperour Charles the Fyft. Translated out of Spanyshe into Englyshe by Richarde Eden, and now Newly Corrected and Amended in dyvers places. 1572. (Imprinted at London: In Powles Churchyarde by Richarde Iugge, printer to the Queenes Maiestie,) 1572

Second edition of Richard Eden's translation of Cortés's manual of navigation, Breve Compendio de la Sphaera y de la Arte de Navigar (Seville, 1551). The impetus for Eden's translation came from Stephen Borough, who had enjoyed, for an Englishman of his generation, unparalleled access to Spanish waters during the 1550s. Cortés's biggest influence on the art of navigation—apart from his clear and pragmatic instructions for making navigational instruments—was the fresh understanding he brought to the nature of the magnetic pole, suggesting that it was different from the true pole. Cortés also drew up increasingly effective means of plotting courses and constructing charts, particularly with regard to the discoveries in the New World.

"In translating this valuable navigation handbook Eden showed a correct understanding of England's deficiencies in the science of navigation, and the book helped to convince Englishmen of their need for better sailing technology. They responded by calling for six editions before the end of the sixteenth century. Eden’s translation was also tied in with the overseas interests of the Muscovy Company, for he dedicated it to William Garrard and Thomas Lodge, aldermen of London and governors of the Muscovy Company, praising them and others who had 'maintained' him and who had taken personal losses in the attempt to find a northwest passage. There were others in England who shared Eden’s knowledge and possibly his enthusiasm for harnessing it in overseas ventures, but no one else at that time put these two forces together in books that could influence the reading public" (Parker, Books to Build an Empire, p. 50 & passim).

Very rare: evidently no other copy has appeared at auction for a century, and ESTC locates only the New York Public Library copy in the United States.

"One of the three most important English books ever published for the improvement of navigation" Waters, The Art of Navigation in England in Elizabethan and Early Stuart Times, p. 359 & passim).