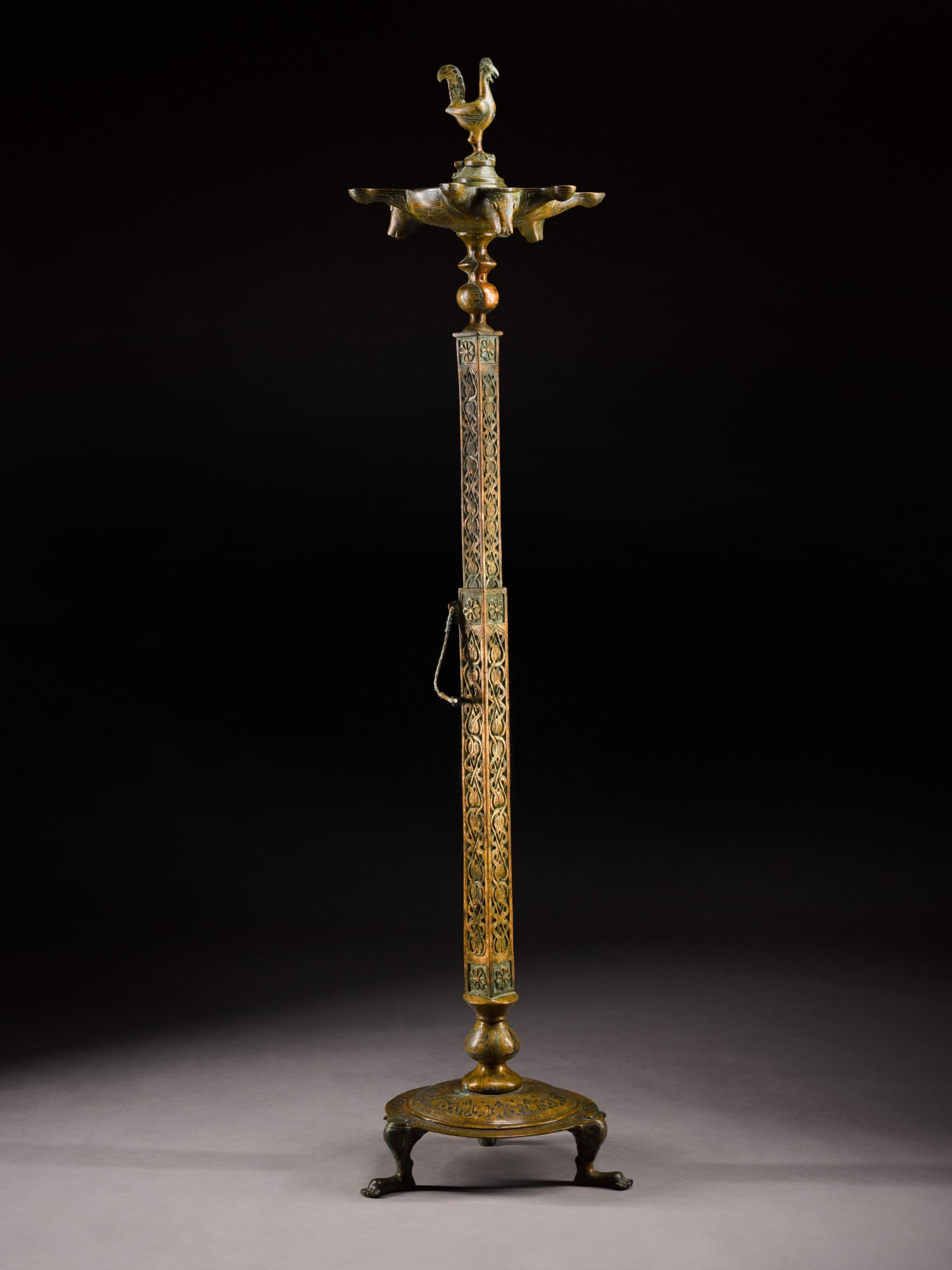 The oil reservoir of circular form with six spouts for wicks divided by three bulls' heads, the underside decorated with engraved bird roundels on a hatched and nielloed ground, surmounted by a hinged dome cover with cockerel finial, on pierced adjustable shaft with openwork arabesques, a spherical boss above engraved with leafy vine, a baluster boss below engraved with a bold Kufic inscription on a nielloed ground, the base engraved and nielloed with arabesques, on three feline feet

In fair overall condition consistent with age, areas of rubbing and oxidation to the patina, minor scattered dents, nicks and pitting, areas of loss to the niello inlay, evidence of old repairs to the neck and to the cockerel's tail, the hinge of the cover consolidated, a replacement pin suspended from a later rope, as viewed

Christie’s London, Art of the Islamic and Indian Worlds, 20 April 1999, lot 512 ('The property of a noble European family by descent').

Around the lower boss:

A masterpiece of metallurgy, this outstanding Andalusian oil lamp combines an expert approach to casting techniques with complex and intricate engravings. The polished and sophisticated rendering of the overall structure almost eclipses the challenge that the thickness of the metal and its weight must have imposed on its manufacture. The various pieces of the lamp were cast separately and seamlessly hammered together. The resulting creation was fashioned according to practical concerns – making it not only an awe-inspiring ceremonial object, but also a thoroughly thought-through technological achievement. The piece is carefully balanced, allowing for the telescopic stem to be shortened in order to fill the oil reservoir, then raised securely at will to project its light overhead.

The remarkable upper section of this object was formerly associated with a bygone Roman tradition of oil lamps, with notable examples featuring protomes in the form of animals. Although the example in the Wallace collection it was once compared to is now known to be from the eighteenth century, other similar ancient lamps of closer conception are documented in various cultural institutions. The British Museum holds examples with lions (inv. no.1864,0126.1) and elephants heads (inv. no.1873,0820.160), and the Wallace Collection’s catalogue mentions several other lamps with bulls’ heads in different collections (J. Warren 2016, p.723). Despite a few structural differences, the most crucial features of these antique lamps, namely their multi-wick protomes radiating from a shallow rounded disc, match the design of the present object’s upper section. Moreover, some Roman lampstands were known to rely on the same telescopic mechanisms – see for example a disassembled example kept in the British Museum (inv. no.1814.7-4.772; 1814.7-4.773; 1814.7-4.774; 1814,0704.775), which is said to have formerly rested on a tripod base.

On the other hand, three comparable bronze candelabra in the grand Lavra Monastery and Saint Catherine’s Monastery in Sinai suggest that our oil lamp’s creation was closely related to coeval models produced by or for Byzantium. A 1991 report by the Benaki Museum’s Byzantine curator Laskarina Bouras dates the objects between the tenth and twelfth centuries. These three candelabra were attributed to Byzantium based on the known history linking the Lavra Monastery to Constantinople, combined with typically Byzantine iconographic and structural elements. Yet, these lamps also share a strikingly similar Islamic decorative repertoire with the present Andalusian example. Most conspicuous is a Kufic inscription one of the Lavra examples, dated to the late eleventh/twelfth century, paired with mesmerising palmette engravings framed in geometric outlines. In contrast, the shape and decoration of the Sinai example may appear more extravagant, but still reveals a similar taste for the zoomorphic. Just like the present lampstand, these come in lively engravings, but also form an integral part of the structure, as witnessed by the three feline-form feet supporting the base. This trend concerns several other contemporary examples, as shown by a Byzantine lampstand in the Metropolitan Museum of Art (inv. no.56.15.2) that shares with our example a closely comparable base supported by zoomorphic feet, the top of which is also flanked by two horn-like features.

The similarities shared by the Byzantine and Al-Andalus lamps are certainly not incidental and can be credited to a period of dynamic diplomatic relations between the two empires. In the ninth century, the Byzantine emperor Theophilos, threatened by the ‘Abbasids and Emirate of Crete’s raids on Sicily and North Africa, sent sumptuous gifts and a truce letter to Cordoba. Although Caliph Abd al-Rahman II had no control over these rival Islamic factions, he leveraged this first amicable contact with Byzantium and sent various gifts back in a gesture of diplomacy. This episode, although rather anecdotal, marked the beginning of almost four centuries of constant and significant exchanges between these two distant powers between the ninth and twelfth centuries. As their political and trading interests collided, Al-Andalus and Byzantium initiated fruitful cultural and economic exchanges, particularly after the First Crusade (Cardoso 2019, pp.91-92). Moreover, the caliphate of Cordoba was renowned for the grand ceremonials it reserved for diplomatic envoys, employing the height of its technical and artistic production to mirror the court’s wealth and supremacy. Various accounts recall the creation of silver gardens filled with metallic automaton of birds, producing melodic chirping sounds when hit by the wind (Cardoso 2019, p.409). The present bronze oil lamp would have appropriately fit in such an environment, possibly borrowing Byzantine elements familiar to Western emissaries but infusing them with grandiose Andalusian features (Cardoso 2018).

In fact, despite the obvious inspiration drawn from Roman and Byzantine aesthetics, the overall rendering and decorative programme of this lamp belongs unequivocally to the Medieval Iberian Islamic repertoire. Visually, it is not dissimilar to two tenth-century candelabra in the David Collection (inv.no. 11/1987) and the Archaeological Museum of Granada (inv. no.R.E. 614) (published in Delpont 2000, p.116, nos.93a and b), one of which conserved its characteristic bulbous base. Furthermore, the overall treatment of the object is reminiscent of other contemporary bronze zoomorphic structures, including the Doha hind (inv. no.MW.7), the Doha peacock (inv. no.MIA.MW.220), the ‘Mari Cha’ Lion (Louvre Abu Dhabi inv. no. LAD 2017.002) and a lion-form doorknocker in the David Collection (inv. no.50/2000; for further discussion of that piece, see J. Meyer & P. Northover 2003, 'A newly acquired Islamic lion door knocker in the David Collection' in Journal of the David Collection, vol.1, pp.48-71), discussed below. These imposing bronze objects, espousing rather rudimentary shapes, are all enhanced with intricate and exceptionally diverse engravings. Such motifs are ubiquitous in Andalusian art in numerous variations on other decorative or architectural artworks.

The main vertical rais-de-coeur pattern that adorns the telescopic stem can be found in an elementary form on a tenth/twelfth-century receptacle in the Archaeological Museum of Cordoba (inv.no. 617), and in a more refined version on a plaque from a casket in the Victoria and Albert Museum (inv. no.4075-1857, published in Rosser-Owen 2010, p.31, no.17), alongside bird figures that resemble those underneath the upper shallow rounded disc with bulls’ heads. The heart-shaped interlaced tendrils ending in half palmettes on the domical part of the base is isolated on a small eleventh-century box in the Real Colegiata de San Isidoro, Leon (published in New York 1993, pp.98-99, no.46). Many Islamic Spanish bronze vessels of the period were endowed with zoomorphic feet (see New York 1993, p.83), but the particular limbs at the base of the present lamp seem to correspond to the rear legs of a crouching animal - see for example a stone lion on the Partal Pool in the Alhambra Palace, Granada (ibid, p.82). The use of a volatile as a finial can be witnessed on various lamps and incense burners in the Instituto de Valencia de Don Juan, Madrid (see inv. no.3071, published in Delpont 2000, p.100, no.46, and another p.119, no.101). Finally, the half-palmette arabesques on the base of the present lamp follow the same design as the pattern covering the Doha hind’s body, which also features an eight-petalled rosette on its breast.

Therefore, the decorative repertory of this oil lamp is undeniably consistent with that of other Spanish objects dating from the late tenth to the early twelfth centuries. Such dating is corroborated by an analysis and metallography of the lamp’s copper alloy by Dr Peter Northover, which linked the piece’s composition to other contemporary items, including the lion doorknocker in the David Collection and the Doha hind mentioned above. The hind’s own metallurgical composition was later associated with that of a group of other renowned Spanish objects, including the Mari-Cha lion, and the Doha peacock. All these objects, including the aforementioned doorknocker, are further connected by a common provenance. They all appeared on the art market in the late 1990s and early 2000s alongside the present oil lamp and were recorded as the “property of a noble European family by descent”. Although the exact origin of these pieces is yet to be determined, William Greenwood offers to build a “family tree” for this “bronze menagerie” originating in the palatial complex of Madinat al-Zahra in the late tenth to early eleventh century (see A. Contadini (ed.), The Pisa Griffin and the Mari-Cha Lion. Metalwork, art and technology in the medieval Islamicate Mediterranean, Pisa, 2018, pp.386-7).

This period corresponds to the artistic and cultural zenith of Al-Andalus under the last Umayyad Caliphs, before the disintegration of a centralised government in Cordoba and the abolition of the Umayyad caliphate. The region was then divided into independent city-states, and the rulers nicknamed muluk al-tawaʾif, ‘kings of the territorial divisions’, giving rise to the Taifa period. Although it was once perceived to be a time of commercial and artistic decline, it has now been demonstrated that the production of material culture flourished thanks to the rivalry of disseminated courts trying to emulate and appropriate the splendour of the past Córdoban realm. Poets, intellectuals and scientists were convened at great cost in each corner of the region and the emirs were known and even criticised for dilapidating their factions’ wealth in vast displays of luxury. It is not hard to imagine how such a lamp could have been imagined as a way to surpass and eclipse the court of one’s rivals. Moreover, the subsistence of these small city-states relied heavily on the alliances and exchanges formed in the past by the Umayyad dynasty with Muslim and Christian powers, a setting which may have encouraged the various influences visible in our lamp (H. Ecker 2004, p.29).

Whether this monumental oil lamp was produced for the last rulers of the great Umayyad court in Spain, or by the succeeding Taifa Kings, this artefact is a unique testimony to the cultural outreach of Al-Andalus, a political entity which leveraged its Islamic heritage and Iberian traditions to assert its position in the bustling Medieval world.