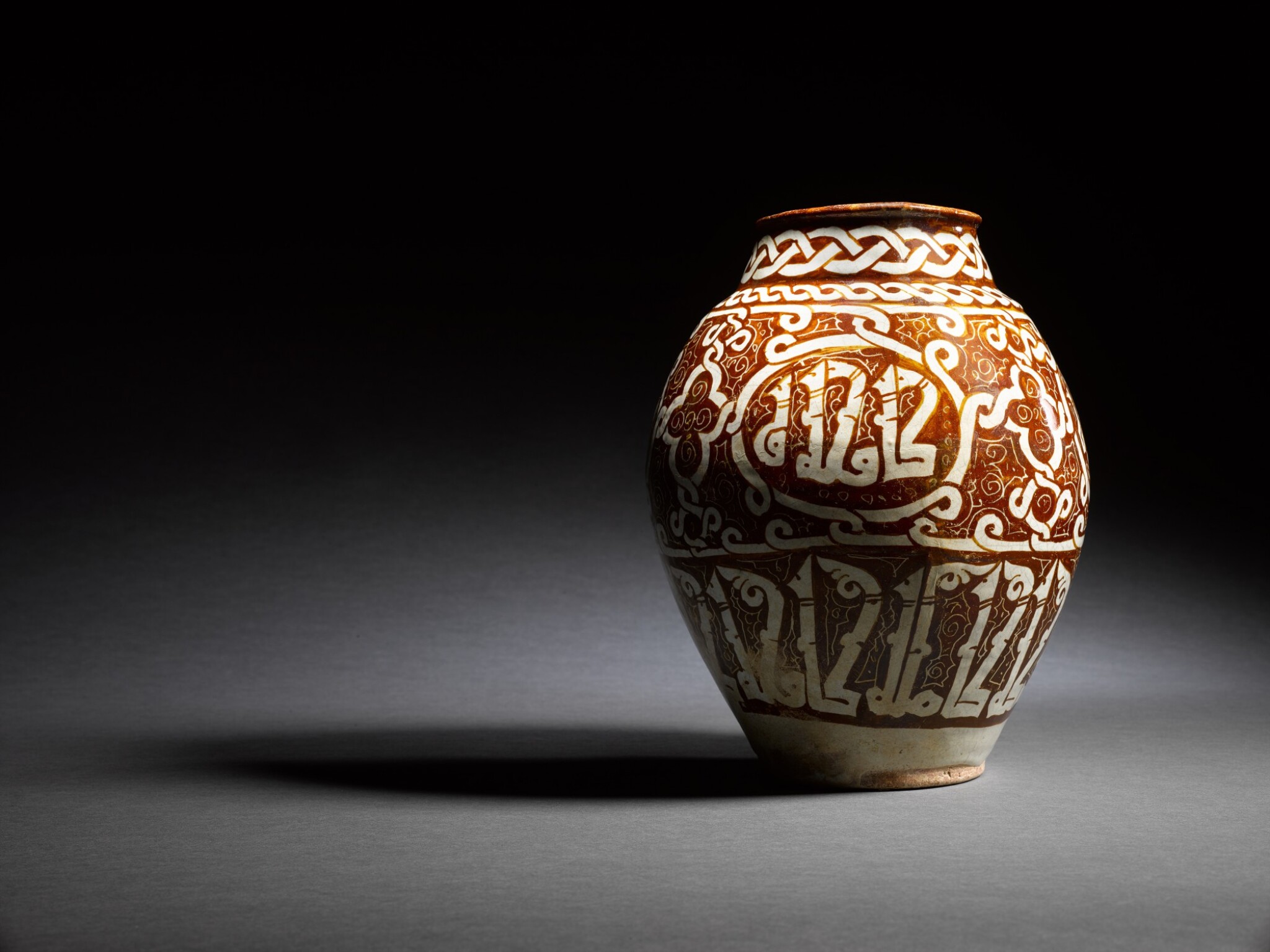 of ovoidal shape on a flat base, with a raised band at the shoulder and a short inward-sloping neck with everted rim, decorated around the body with an interlocking geometrical trellis of braided cables forming four oval cartouches enclosing foliated Kufic script reserved against a solid lustre ground with scratched lines in the lustre, a broad band of Kufic with floriated ascenders in a frieze around the lower body, the shoulder with a band of cable ornament and a plaited band around the neck, the interior glazed

Some minor body surface damage and glaze loses with associated repair and touching-up, the base with two drill holes where samples have been taken for thermoluminescence examination, overall in remarkable condition.

The Unity of Islamic Art, The lslamic Art Gallery of the King Faisal Center for Research and Islamic Studies, Riyadh, 1985.

In the roundels on the body:

This superb jar belongs to a small group of surviving Fatimid lustre jars, published examples of which include those in the Al-Sabah Collection, Kuwait, the Benaki Museum, Athens, and the Victoria and Albert Museum.

The bulk of extant Fatimid lustre pottery is fragmentary; intact pieces are exceptionally rare. Probably the closest known comparable piece to this jar was sold in these rooms, 3 October 2012, lot 182. The script on this jar is highly idiosyncratic and can be likened to the script on the present piece in the looping characteristic of some of the letter ends and in the accentuation of the letter endings with palmettes or as in the 2012 jar, with scrolling tendrils. A more damaged example is in the Benaki Museum, Athens (see Philon 1980, pl. XII and fig.363). Three fragments with similar calligraphic decoration are also in the Benaki Museum (inv. nos.11766, 11767 and 11767b) (see Philon 1980, p.258, fig.574), and another single fragment is in the Museum of Arab Art, Cairo (see Bahgat 1922, pl.20).

The jar in the Al-Sabah collection (inv. no.LNS 293 C) was one of the first Fatimid lustre pieces to have been published. Oliver Watson, in his catalogue of the ceramics in the Kuwait National Museum, re-iterates Dikran Kelekian’s original remarks on the piece from 1910: "Found at Old Cairo. Eleventh Century. Made of coarse clay with an uneven mottled surface, but a fine lustre. Handsome, bold decoration in brown tones on an ivory ground, foliage forming medallions in which are enclosed birds holding branches and leaves in their beaks. Possibly the birds are intended to represent the crow, which was the emblem of Old Cairo. A very effective and important piece and one of the few perfect specimens of Fustat pottery in existence” (Watson 2004, p.279, cat. no.Ja.6).

A further notable example is in the Victoria and Albert Museum (inv. no.C.48-1952). On this jar, the shape varies slightly from the previous models, and it is decorated to the neck with a band of fish, whose iconography may derive from various sources, notably Abbasid wares. The central band to the body still features the palmette motifs also found on the other two jars, stylised and almost resembling hearts. The V&A jar shares with the present example the ropework band which appears here around the shoulder rather than the waist.

This lustre jar, along with the others mentioned above, needs to be seen in the context of the earlier phase of lustre production under the Abbasids and the new phase which flowed from the expansion and enrichment of the Fatimid dynasty. Presented as regional challengers to the Abbasid empire, the Fatimids' conquest of Egypt and subsequent creation of Cairo, or al-Qahira, ‘the triumphant’, as their new capital in 973 AD, brought this new imperial power into direct competition with the Abbasid court at Baghdad. Studies of the vast corpus of sherd material, undertaken by Helen Philon and others, have shown a wide variety of designs – human, animal, vegetal and calligraphic – as well as a range of body fabrics and glaze types. This would seem to indicate a socially diverse clientele with the better pieces probably reserved for the court, and the other wares for the upper and middle echelons of society, in particular the affluent merchant class that had burgeoned in Cairo in the late tenth century.

The lively and accomplished design compares not only with the ceramic fragments mentioned above, but also with designs in other media. The floriated and foliated Kufic with swan-necked letters relates to Fatimid inscriptions carved in marble (see London 1976, no.478), and the repetition of good wishes is a formula repeated on textiles of the period (see Contadini 1998, pp. 67-68, pl.24,). The distinctive combination of calligraphic and rope-work elements, however, is a decorative arrangement specific to the Fatimid potter’s repertory and bears eloquent witness to the independence of mind and originality of spirit of the Fustat potteries during the Fatimid period.

The paucity of dated and dateable pieces impedes any attempt at building a systematic chronology. However, an early Fatimid date for this jar can be posited on the basis of numismatic evidence from excavations at Bahnasa in Egypt. During the 1986-87 season, under the directorship of Professor Géza Fehérvári, three Fatimid houses and a Fatimid street were discovered at Site ‘E’. In one of the houses, a glazed jar was excavated with two hundred Fatimid gold dinars inside. One of these bore the name of the Fatimid Caliph al-'Aziz r.(975-996), and the rest, the name of his successor, al-Hakim (r.996-1021). Immediately behind this jar were the neck and base fragments of a large lustre-decorated jar (exc. no.86-1307) whose shape, design and colour are all similar to the present example. A late tenth or early eleventh century date for the excavated pieces and the intact jar are therefore well substantiated by the presence of the gold coins (G. Fehérvári, ‘First Interim Report of the Bahnasa Excavations, 1985-7’, Dar al-Athar al-Islamiyya Newsletter, Kuwait, 1987).