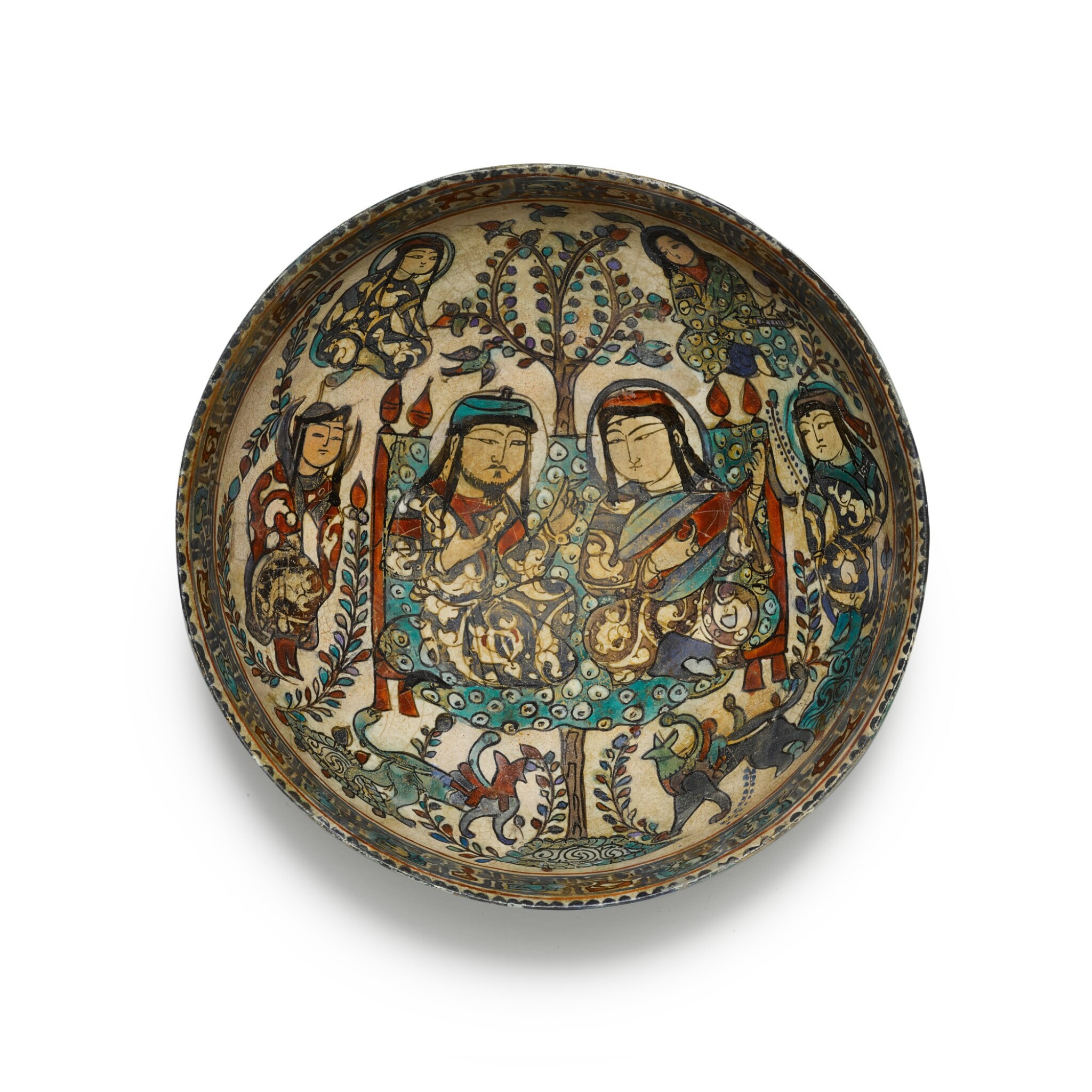 of rounded form with slightly everted rim on a short foot, painted in blue, green, orange, turquoise, red, beige and black inglaze pigments and overglaze polychrome enamels on an opacified tin glaze, the interior with a depiction of a seated confronted couple surrounded with four entertainers in a garden, an inscription in pseudo-Kufic below the rim, the exterior with a band of griffins interspaced with dotted twigs

The colours vivid, with breaks and associated restoration well-matched with the original around the rim, minor repainting, craquelure to glaze, as viewed.

Please note that there may be restrictions on the import of property of Iranian origin into the USA and some or all member countries of the Gulf Co-operation Council. Any buyers planning to import property of Iranian origin into any of these countries should satisfy themselves of the relevant import regime. Sotheby's will not assist buyers with the shipment of such items into the USA or the GCC. In addition, FedEx and US courier services will no longer carry Iranian-origin goods to any location. Any shipment services would need to be provided by a Fine Art shipping company
Ex-private collection, Osaka, Japan, before 2000.

The subject of this bowl is particularly popular in Kashan pottery, representing a man and a woman seated cross-legged around a tree (O. Watson 2020, p.272). They are surrounded by a small pond of water, griffin-like creatures and flying birds, evoking a heavenly outdoor setting. Gardens were essential components of Seljuq and post-Seljuq court architecture, either incorporated in palace complexes following Sasanian tradition, or existing as independent properties outside of town (S. Candy 2016, p.92). They served for princely leisure including hunting, feasting and entertaining (ibid).

The dotted rim above a pseudo-Kufic inscription resembles closely a group of other wares published in Watson (2020), p.261-5, pl.129-131. A closer example in composition is in the Fitzwilliam Museum, Cambridge (inv. no.C.129-1935, published in A. Pope 1964, Vol.5, pl.694.A), formally attributed to Kashan (ibid, p.1604). However, the scene on the present bowl scene seems more elaborate and is reminiscent of the larger designs on a group of bowls distinguished by Arthur Pope as of “royal style”. There have been extensive discussions relative to the identity of these figures, with Pope suggesting they could represent young Tughril Beg II and his consort (A. Pope, Vol.2, pp.1599-1600). The two figures seem to engage in a particular dynamic fashion, with the man gesturing his hands in a conversational way towards his interlocutor. This vibrant scene on a lush background sets the present bowl apart from other more mundane examples of the mina’i school.