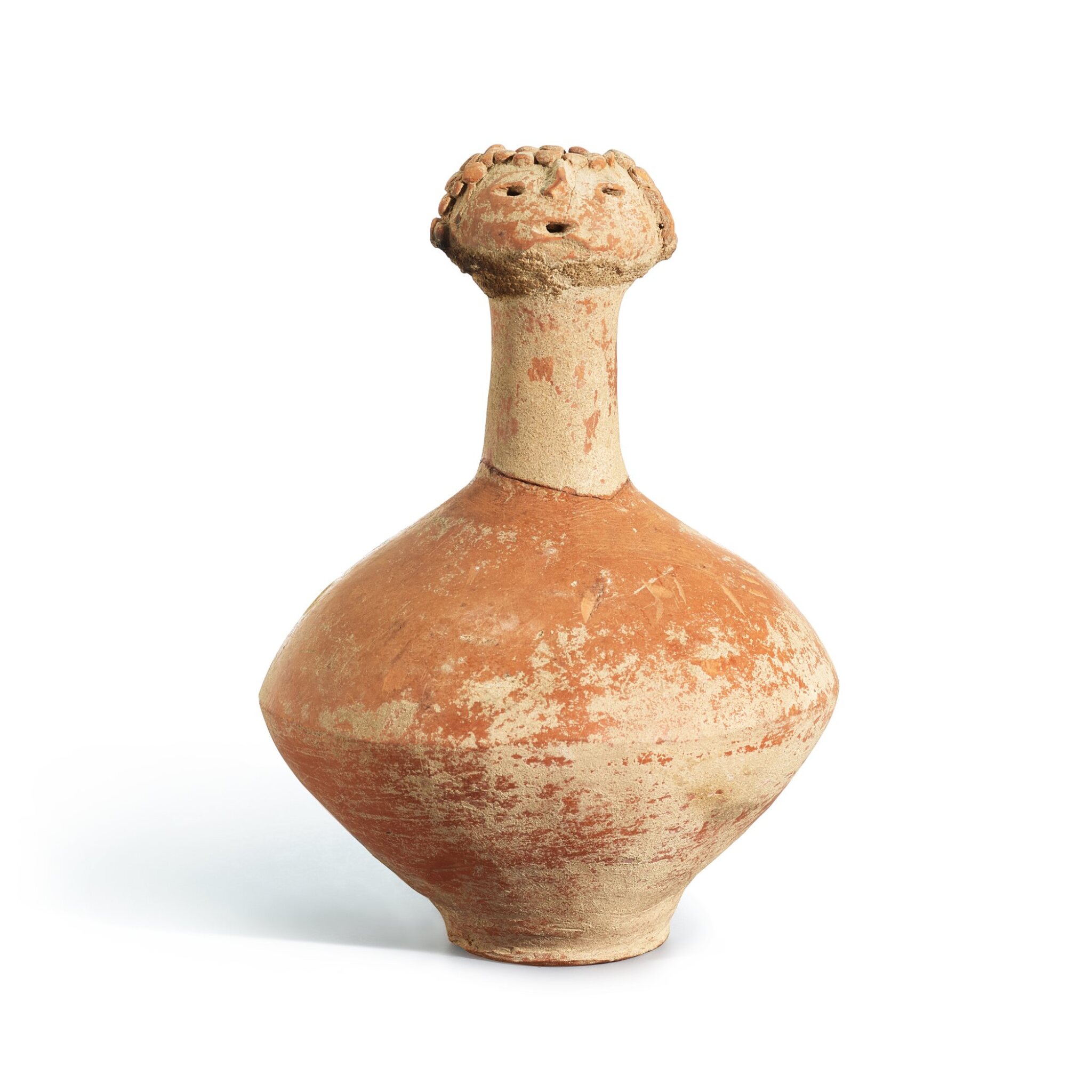 The dating of this lot is consistent with the results of Oxford Authentication Ltd, thermoluminescence test C108u79.

This rare, museum-quality vessel has its neck reattached, both the top and the bottom have been tested with Oxford Authentication Ltd and the dating of both are consistent with the test result. There are some expected losses to the extremities and two consolidated firing flaws to the body. The face with a diagonal firing hairline.

Skilfully sculpted with a humanoid head forming the mouth and surmounting the elongated slender neck, the current bottle from the Banpo phase of the Yangshao culture is a unique and important example of its type. Other vessels with humanoid heads are known but are different in form and lack the sharp edge encircling the midpoint of the rounded shoulder of the current vessel, which is likely the luting line but certainly demonstrates the intentionality and precision of the potter.

The form of the humanoid head at the top appears to indicate that the potter likely added facial features to what otherwise would have been a more common undecorated mouth. See a related ‘red’ pottery example surmounted with a larger head, from the Meiyintang collection, illustrated in Regina Krahl, Chinese Ceramics from the Meiyintang Collection, London, vol. 3, 2006, pl. 1016. Sculpted with a larger head and a shorter neck, it was likely inspired by the double-gourd form often seen in pottery. The stylisation of the hair is also very similar to the current vessel, with small balls of clay pressed on to represent tight curls – more commonly seen on people from outside of China. However, whilst apertures are pierced in the facial features of the Meiyintang example, it is completely closed, thereby ruling out its function as a vessel.

See also a pottery bottle from the Shilingxia culture, c. 4th century B.C., with a humanoid head likely to represent someone from outside of China. Depicted with overlapping bands of clay likely to represent a turban, the figure is further depicted with round eyes – as opposed to almond-shaped ones more commonly employed to depict Asians.