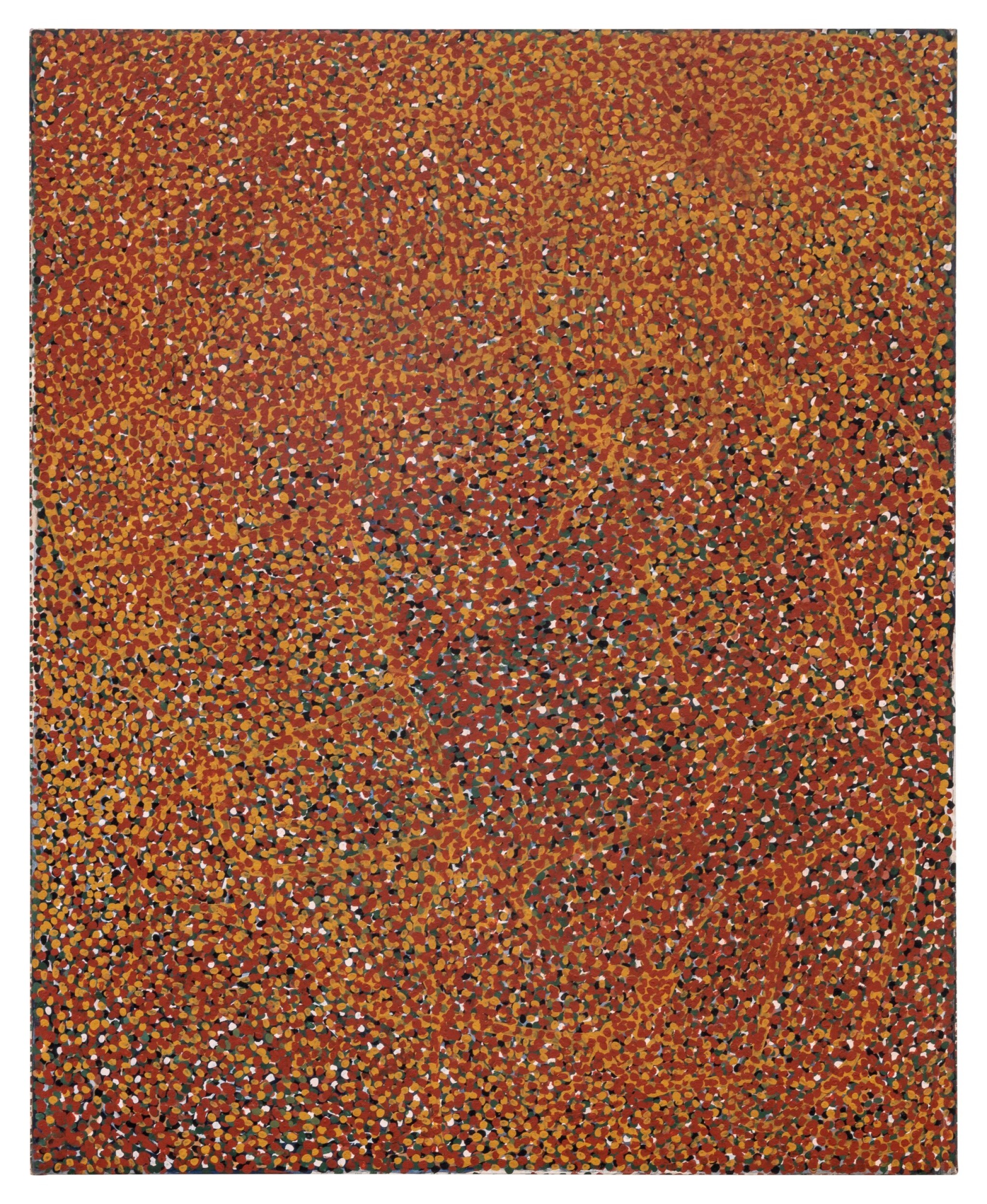 Housed in a custom timber box frame. The painting appears in excellent condition overall with no repairs or restorations. Some very minor scuffing at the corners.

Awelye’s certificate’s number C086 means that it was the 86th painting to be catalogued at the Delmore Downs cattle station in October 1989, from a group of painters numbering about 100. Hence, this Awelye was most likely made in September or October, about ten months after Emily Kngwarreye was first introduced to acrylic paint and canvas. It had been a fast-moving 10 months for Kngwarreye, in which she was catapulted from obscurity into the Australian artworld.

In late 1988, Rodney Gooch, who was managing the batik collective of about 100 Anmatyerre women at Utopia to which she belonged, had conceived a summer painting project for the women. In mid-April 1989, 81 canvasses produced by 80 artists from the collective were exhibited at the SH Ervin Gallery in Sydney. As the oldest member of the batik collective, Kngwarreye’s painting, Emu Woman, was reproduced on the front cover of the exhibition brochure. The exhibition received very positive reviews, as did six more in which she was included before the year was over. By then, she was an artworld star, its latest discovery.

Kngwarreye was still making batik designs on silk in April. She much preferred the less laborious and speedier medium of painting, and the success of the first exhibition at the SH Ervin Gallery was enough for her to commit to acrylic painting despite having completed only a few. In May, she began painting in earnest for Gooch and also for the Holts, who ran the neighbouring cattle station of Delmore Downs. Here she could paint in relative comfort and this is where Awelye was made.

The title Awelye, which refers to women’s increase ceremonies and body designs relating to the care of country, was the title of many of her paintings from mid-1989. They are distinguished by a dense all over dotting animated by tonal and colour variations that create a fluid rippling on the surface of the canvas as if a breeze is blowing across it. While the painting’s certificate omits a title, the description of its subject, which would have been supplied by Kngwarreye, refers to the grass seeds which are a main concern of these increase ceremonies and their body designs. The semi-obscured lattice structure refers to both the rhizomic roots of the grasses and the bands of body designs infilled with dots (representing the seeds) painted on the breasts and shoulders.

In this early phase of her acrylic painting, Kngwarreye explored the pictorial possibilities of laying densely patterned dotting over an underlying lattice structure, which ranged from the latter being totally obscured by the dotting, as in the painting recently acquired by the Tate that was completed in July 1989, to its fugitive presence in works such as this one, which was relatively common in paintings made around September, to the lattice reappearing more forcefully through the dots in later work that year. This dialectic of presence and absence would provide the pictorial idea for her paintings over the next few years, a period in which many connoisseurs believe she produced her most iconic paintings.

This painting is sold with accompanying documentation from Utopia Station/Delmore Gallery signed by Janet Holt, October 1989.