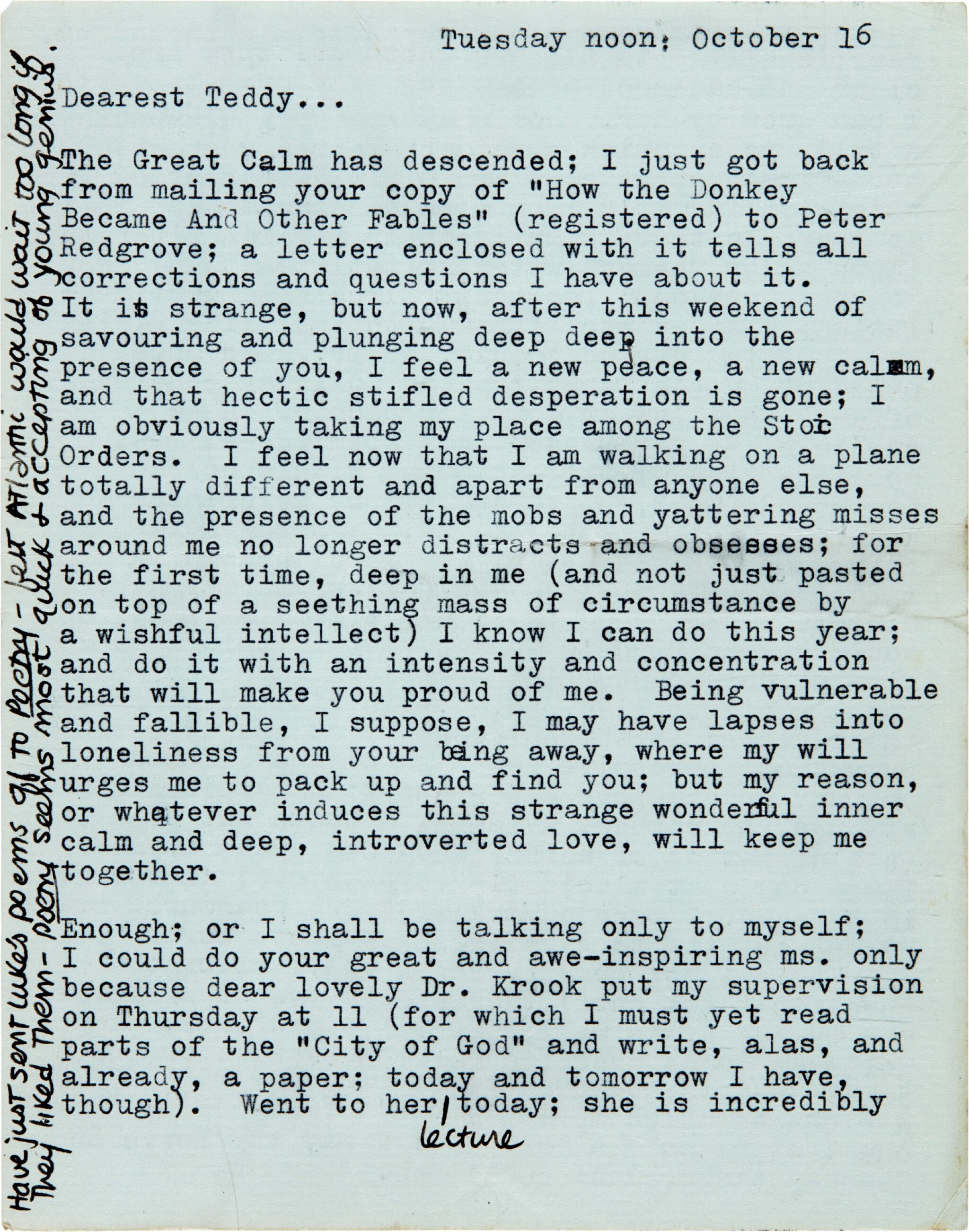 on her return to Cambridge after a weekend with Hughes in London ("...I just got back from mailing your copy of 'How the Donkey Became And Other Fables' (registered) to Peter Redgrove..."), her enthusiasm for her tutor Dorothea Krook ("...I would like to be her disciple this year; shall do to all her lectures: they are clear and cadenced as a piece of exquisite music; I can grow by her...") but poor opinion of some other lecturers, encouraging his latest writing ideas and with her gratitude to Hughes for "showing me, in a way, what and how I can draw from my own life", her latest plans for submissions to magazines, then turning to describe in some detail her recent dreams ("...sunday night, had a lovely rich one, brightly colored, about finding a patch of huge green four-leaf clovers with you and picking three..."), scattered autograph corrections and two-line autograph addition on margin of first page, 4 pages, 8vo (177 x 140mm), blue writing paper, [Whitstead, Newnham College, Cambridge], 16 October 1956, rust-marks from paperclip

"...It is strange, but now, after this weekend of savouring and plunging deep deep into the presence of you, I feel a new peace, a new calm, and that hectic stifled desperation is gone..."

Hughes and Plath had spent the previous weekend in London. Hughes had come down from his parents' home in Yorkshire to his digs in Bloomsbury. He had been planning to sail to Spain to teach whilst his wife completed her Cambridge degree, but his new work for the BBC was raising his profile as a poet so this plan was increasingly in doubt. The reunion gave Plath new strength and confidence, and she writes of her plans to flourish intellectually during the new academic year as she ponders the quality of the Cambridge lecturers ("...I may try [C.S.] Lewis on Chaucer backgrounds...").

She also turns her critical eye to Nimbus magazine, the editor having invited Hughes to submit work. The new poems by Auden that had appeared in the latest issue were, however, a great disappointment: "there was such an unpleasant nastiness to them; like grinding metal; if someone would print these poems in paragraph form, I think it might embarrass the hell out of the 'poet', because it's atrocious prose".

Finally, she describes her recent dreams - always a subject of fascination to Hughes. She wonders if her story about a dreamless woman has driven away her nightmares (see previous lot) as these are dreams of writing poetry under a "sea-gull crammed sky", and of lolling on a deck-chair on a beach conversing with "eva gabor and a south american princess".