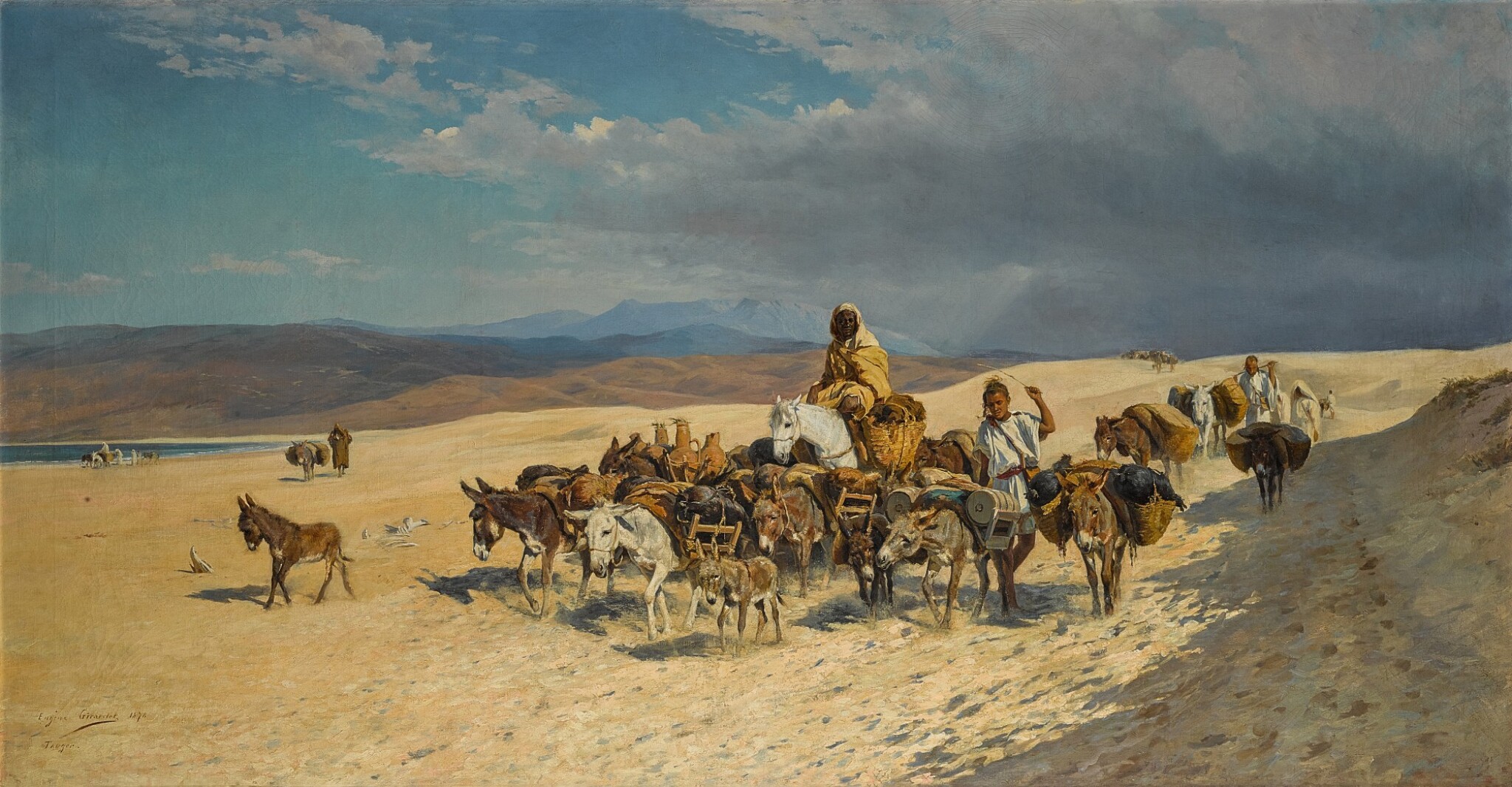 Original canvas. There is fine craquelure webbing throughout, most notable in the sky. There are faint stretcher marks visible upon close inspection. Under ultra-violet light there are a few minor spots of retouching visible to the sky. Overall this work is in good condition, clean and ready to hang with fresh, vibrant colours.

Galleria d'Arte Esedra, Rome, 1972
Private collection, Italy
Paris, Salon, 1878, no. 1023 (as Les porteurs d'eau, à Tanger)
The present work, possibly the largest in the artist’s oeuvre, is an evocative example of one of his most representative and famous subjects - an advancing caravan through a vast and inhospitable landscape. Other examples include Camels in the Dunes at Bou-Saada (Musée des Beaux-Arts, Nantes) and Salt Caravans in the Desert (private collection).

Painted in 1878, The Water Carriers, Tangier is a celebration of the monumental task of moving and conserving water. In the nineteenth century, before the advent of centralized water supply systems, local people and their herds would be employed to carry water, the lifeblood of society. In this impressive work, Girardet memorialises the adaptability and resolve of the local people, who were successful at surviving in such a hostile environment.

The artist depicts a herd of donkeys loaded with gourdes, waterskins and barrels, moving its precious cargo of potable water through a brightly lit terrain. The shade next to the group, enveloping one donkey in darkness, serves to accentuate the intense burning heat of the desert sun. The sheer size of the work has allowed Girardet to depict with exacting detail each element and member of the sizeable caravan and yet, they appear small in comparison to the expansive landscape. Girardet would use numerous studies he had made to capture ethnographic details and he records accurately not only costumes, animals and accoutrements but the functions of different members of the caravan; in the present work a man surveys the land sitting atop a white horse and the others, walk alongside their herd, keeping the donkeys in check and moving forward. In the distance another caravan is just visible beneath a foreboding stormy sky.

Born in Paris to a family of artists, Girardet was encouraged by his father the engraver Paul Girardet, to study at L‘École des Beaux-Arts. After spending time in Gérôme’s studio Girardet made his first trip to Spain and Morocco in 1874 and then travelled to Tunisia and Algeria. Throughout his travels he continuously searched for new places, cultures, and people, his quest taking him to Al-Kantara, Biskra, Boghara and Bou-Saada where he met the painter Etienne Dinet. Both Girardet and Dinet shared a desire to capture the scenes of North Africa accurately and as they observed them.

The present work is sold with a report by Professor Paolo Serafini, Studio d'Arte Serafini srl, Rome, and a bill of sale to the previous owner from Galleria d'Arte Esedra in Rome.