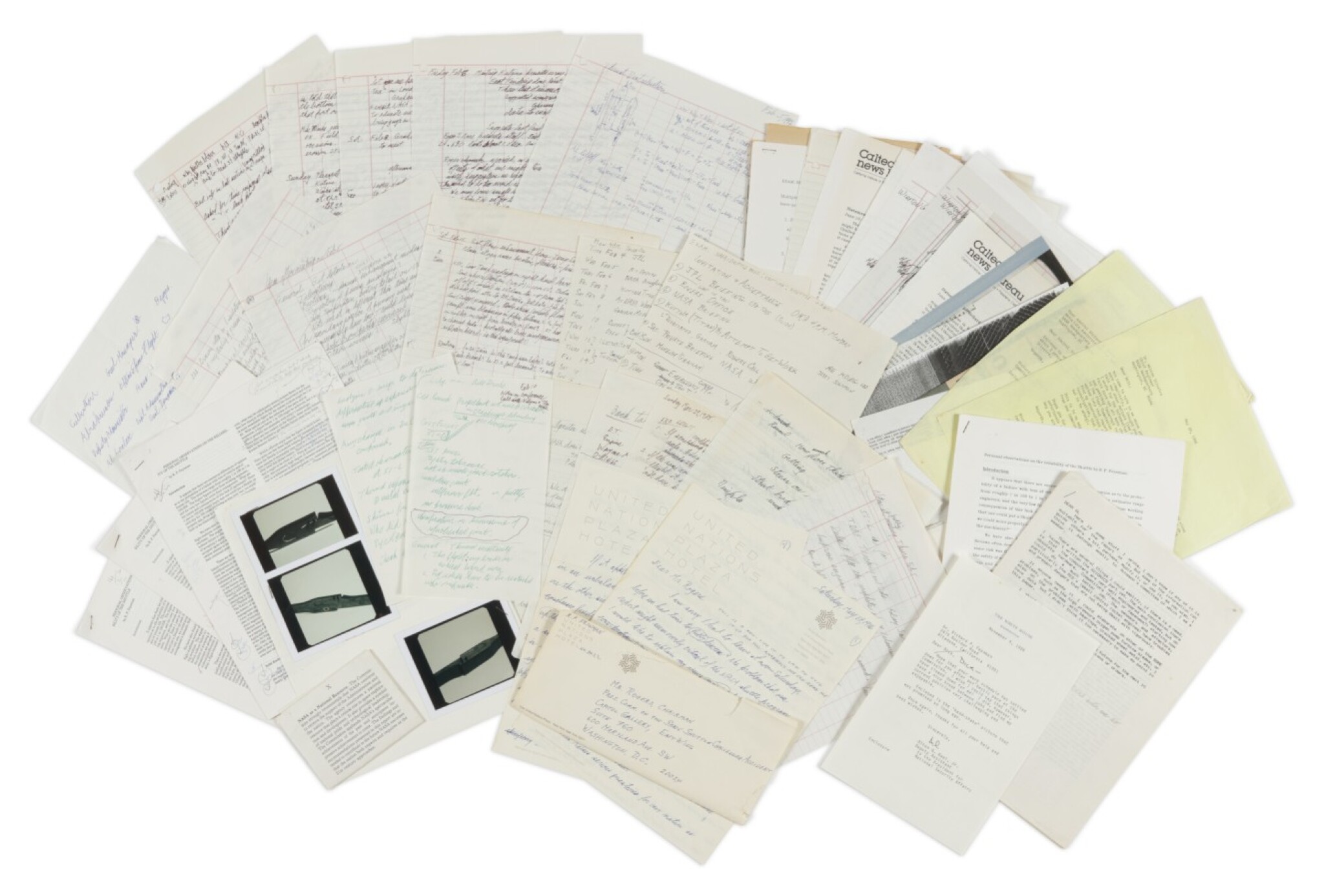 Archive consisting of Richard Feynman's handwritten notes, drafts of his report, autograph letter to William Rogers, and other materials relating to his work as part of the Rogers Commission to Investigate the Space Shuttle Challenger disaster, February-November, 1986.

AND: 4 drafts of Feynman's Personal Observations On the Reliability of the Shuttle, 1 being the first draft typed up by Feynman with a cover letter addressed to Al[ton Keel], 3 having extensive edits and annotations in the hand of Helen Tuck, Feynman's (and fellow Nobelist Murray Gell-Mann's) secretary at Cal-Tech, and a final clean copy, together with a Typed letter signed "Al" from Alton Keel, Deputy Assistant to the President for National Security Affairs to Feynman, on White House letterhead, 40 November, 1986.

AND: Collection of other archival materials relating to the investigation, including Feynman's signed copy of the Commission's Recommendations (labeled by Feynman "PRIVATE CLOSE HOLD", 3 overhead transparencies made by Feynman explaining the problem with the O-rings, three vintage polaroid photographs of the Space Shuttle solid rocket booster field joint assembly showing the O-rings and vintage photograph of a scale model of the Space Shuttle Discovery, retained copies of letters from Feynman to Dr. Milton Silveria, Chief Engineer for NASA and Rear Admiral Richard H Truly dated 22 May, 1986 regarding the Commission report, press statements from Feynman by the Caltech News Bureau, a copy of Feynman's CV, a copy of the quiz given to commission members, and various newspaper clippings relating to the investigation.

"FOR A SUCCESSFUL TECHNOLOGY, REALITY MUST TAKE PRECEDENCE OVER PUBLIC RELATIONS, FOR NATURE CANNOT BE FOOLED." —Richard P. Feynman, "Volume 2: Appendix F - Personal Observations on the Reliability of the Shuttle" IN: Report to the President by the Presidential Commission on the Space Shuttle Challenger Accident, June 6th, 1986, Washington D.C.

On January 28, 1986, scores of people around the world, including a great number of school children (the present specialist included) tuned in to watch the launch of the Space Shuttle Challenger on its final flight, planned as the first "Teacher in Space" project. 73 seconds into the flight, the shuttle broke apart, resulting in the death of all seven crew members: Commander Francis R. Scobee, Pilot Michael J. Smith, Mission Specialists Ellison S. Onizuka, Judith A. Resnik, and Ronald McNair, and Payload Specialists Gregory B. Jarvis and S. Christa McAuliffe.

Following the disaster, the Space Shuttle program was placed on hiatus, and President Reagan appointed a commission to investigate the causes. William P. Rogers was selected to chair the commission, and other members included Major General Donald Kutyna of the Department of Defense, Sally Ride, Neil Armstrong, and Chuck Yeager, as well as several aerospace contractor executives and NASA consultants. William Graham, NASA's acting administrator had provided the list of potential commissioners to the White House, and having attended Feynman's lectures at Caltech, as well as the lectures he gave at Hughes Aircraft, called and asked Feynman to join the commission. According to Feynman's biographer, James Gleick, when called, Feynman responded "You're ruining my life." Graham did not know it at the time, but Feynman was for the second time suffering from a rare form of cancer, which would take his life just seven months after the Commission submitted their report to President Reagan. "Only later did Graham realize what he [Feynman] had meant : You're using up my very short time." (Gleick, Genius, p. 417)

Feynman threw all of his energy into the project, immediately setting up briefings with friends at the nearby Jet Propulsion Laboratory in Pasadena, California, meeting with engineers, visiting NASA facilities and interviewing employees, and studying schematics and technical drawings; what he eventually discovered was that there was a failure in the rubber O-rings, used to seal the joints that held together the sections of the shuttle's solid rocket boosters. In the course of his investigations, Feynman uncovered more and more evidence that the O-rings became less resilient when subjected to cold temperatures; the evening before the Challenger launch was particularly cold, and ice had built up on the spacecraft overnight. While the inspection team ensured that the ice had melted before proceeding with launch, the damage to the O-rings could not be reversed.

Feynman began to press questions about the O-rings with various NASA officials, and kept hitting a wall, finding that everyone he spoke to evaded the questions in one way or another. Throughout the hearings repeatedly requested data and answers, and again and again, these questions would be brushed aside. Feynman was fighting an uphill battle; while he was on a quest to find the cause of the accident, others were on a mission to protect NASA's image, most notably Rogers himself, who said "We are not going to conduct this investigation in a manner which would be unfairly critical of NASA, because we think—I certainly think—NASA has done an excellent job, and I think the American people do." (Genius,  p. 417) Feynman and Rogers would clash repeatedly over this question of the O-rings, and Rogers was overhead at one point standing next to Neil Armstrong saying "Feynman is becoming a real pain in the ass." (Genius, p. 423).

Feynman knew he had to do something, and so devised an ingenious strategy to prove his point during the televised hearings. Prior to the hearing, Feynman purchased a small C-clamp and a pair of pliers, and then requested cups and a pitcher of ice water. During the hearing a life-sized joint was passed around for all to see, and when it came by Feynman he took his pliers and pulled out the rubber O-ring from the joint. He then famously plunged the O-ring into the ice water for all to see, and demonstrated the result, saying "I took this stuff that I got out of your seal and I put it in ice water, and I discovered that when you put some pressure on it for a while and then undo it it doesn't stretch back. It stays the same dimension. In other words, for a few seconds at least and more seconds that that, there is no resilience in this particular material when it is at a temperature of 32 degrees... I believe that has some significance for our problem." (Genius, p. 423)

Following the hearing, Feynman penned the included famous letter to Rogers just 3 weeks prior to the Commission submitting its report to the President, which reads in part:

"It is our responsibility to find the direct and proximate causes of the accident, and to make recommendations on how to avoid such accidents in the future. Unfortunately we have found as the proximate cause, very serious and extensive 'flaws' in management.... This raises serious questions for our nation to how to continue on with the space program... It is our duty to supply such information as completely, accurately, and impartially as possible. We have laid out the facts and done it well. The large number of negative observations are a result of the appalling condition NASA's shuttle program has gotten into. It is unfortunate, but true, and we would do a disservice if we tried to be less than frank about it. The president needs to know it if he is to make wise decisions... A general statement, without presenting the particular evidence in he report, that NASA is after all actually doing a wonderful job would weaken our careful report, and might even make us look foolish, if it is contrasted with the mass of evidence we ourselves present in a careful documented way... I am satisfied that my "reliability" contribution need not go in the main report but will go into the appendix more or less intact rather than being lost in the archives. It is a good compromise we have come to.

Known and loved for always seeking out objective evidence, even when unpopular and inconvenient. Feynman did what he always did; he sought and found the truth, forced NASA to admit the failures that had led to the loss of 7 lives, and ensured that the same mistake was not repeated again.

To view the full Report by the Presidential Commission on the Space Shuttle Challenger disaster, see https://history.nasa.gov/rogersrep/genindex.htm

To read Richard Feynman's Appendix to the Report, see https://science.ksc.nasa.gov/shuttle/missions/51-l/docs/rogers-commission/Appendix-F.txt