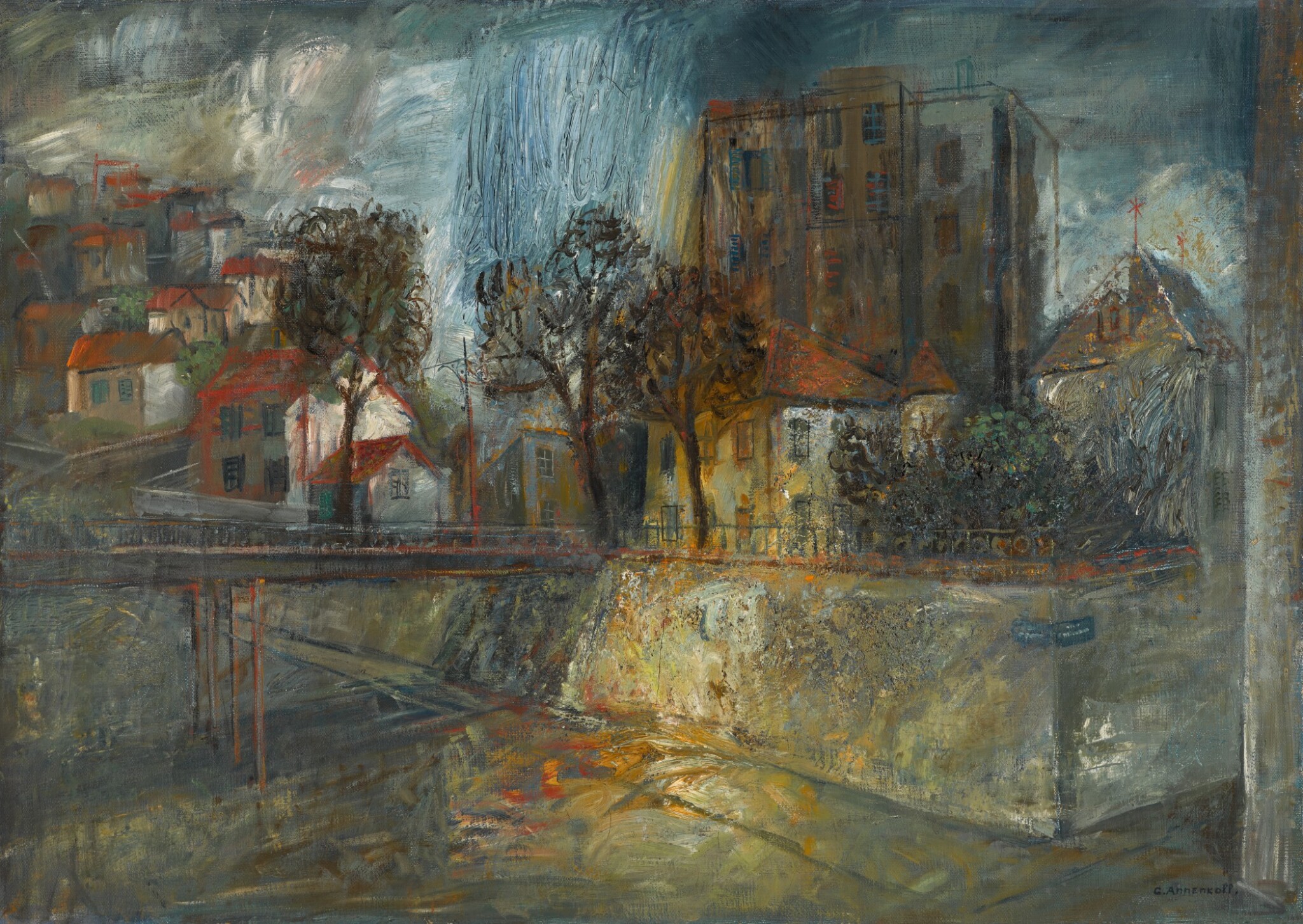 Original canvas. All four corners show signs of wear and the top left corner has worn through. There are isolated cracks visible in places, most notably to the thicker areas of impasto in the sky, to the wall and the ground in the lower middle, and in the lower left quadrant. There are flecks of paint loss to the sky in the upper left, to the top of the building in the upper right and to the centre of the wall in the far right. A scratch is visible to the sky to the left of the top edge. There are frame abrasions with associated losses along the edges. Inspection under UV light reveals a couple of minor spots of retouching in the upper right quadrant and an uneven and discoloured varnish layer. Framed. Unexamined out of frame.

Sotheby's London, The Russian Sale, 26 May 2004, lot 150
Acquired at the above sale by the present owner

Banlieue de Paris dates to 1928-29 and is an example of what can be referred to as Yuri Annenkov’s first French period. After his arrival in Paris, Annenkov started painting landscapes, still lifes, portraits and nudes in his distinctive figurative style. Deviating subtly from a realist framework, these works are abundant in artistic experimentation and formal discoveries. This atmospheric painting conveys the gloomy ambience of the suburbs of Paris, which the artist often visited while working on the illustrations for Louis Chéronnet’s Paris Extra-Muros (Paris: Au Sans Pareil, 1929, with a foreword by Jules Romain).

The following year an exhibition dedicated to Annenkov was held at Galerie Bing, accompanied by an illustrated monograph by Pierre Courthion, who rightly noted: ‘The suburbs were the true school of life for Yuri Annenkov; by observing them, the painter learned to differentiate between materials, to disregard the superficial feats which make up bad paintings, and to create by focusing on the everyday in order to seek out the eternal and get to the heart of the matter.’

Annenkov employs a great economy of means and a muted palette to depict the Paris suburbs. The painting is an imagined landscape, designed and reassembled through the painter’s selective eye. A footbridge connects both banks lined with spindly trees. Beneath a tormented sky a ghost-like building stands high surrounded by small houses.

The colour range is purposefully limited, only occasionally intercepted by flashes of colour. While the sky is lead-grey, the palette is dominated by a combination of earthy, greenish and yellowish hues, with only the white walls and the reddish-brown roofs adding a touch of colour and lightening up the overall atmosphere of sadness. The outlines have been quickly sketched out, using vigorous, dynamic strokes and scratches, applied with extreme virtuosity using the brush and the palette knife.

Devoid of any human presence, with houses depicted with closed shutters, Annenkov’s suburban landscape appears like an island, cut off from the rest of the world. This is how the painter must have felt, suffering from anxiety during the early days of his exile. The present work is stylistically comparable to other works from the same series, in particular Deux Maisons (1928), Fortifications and L’Hospice rouge (1929), reproduced by Pierre Courthion in his 1930 monograph on Annenkov.

We are grateful to the expert Vladimir Hofmann, the artist’s former student and author of his catalogue raisonné, for providing this catalogue note.