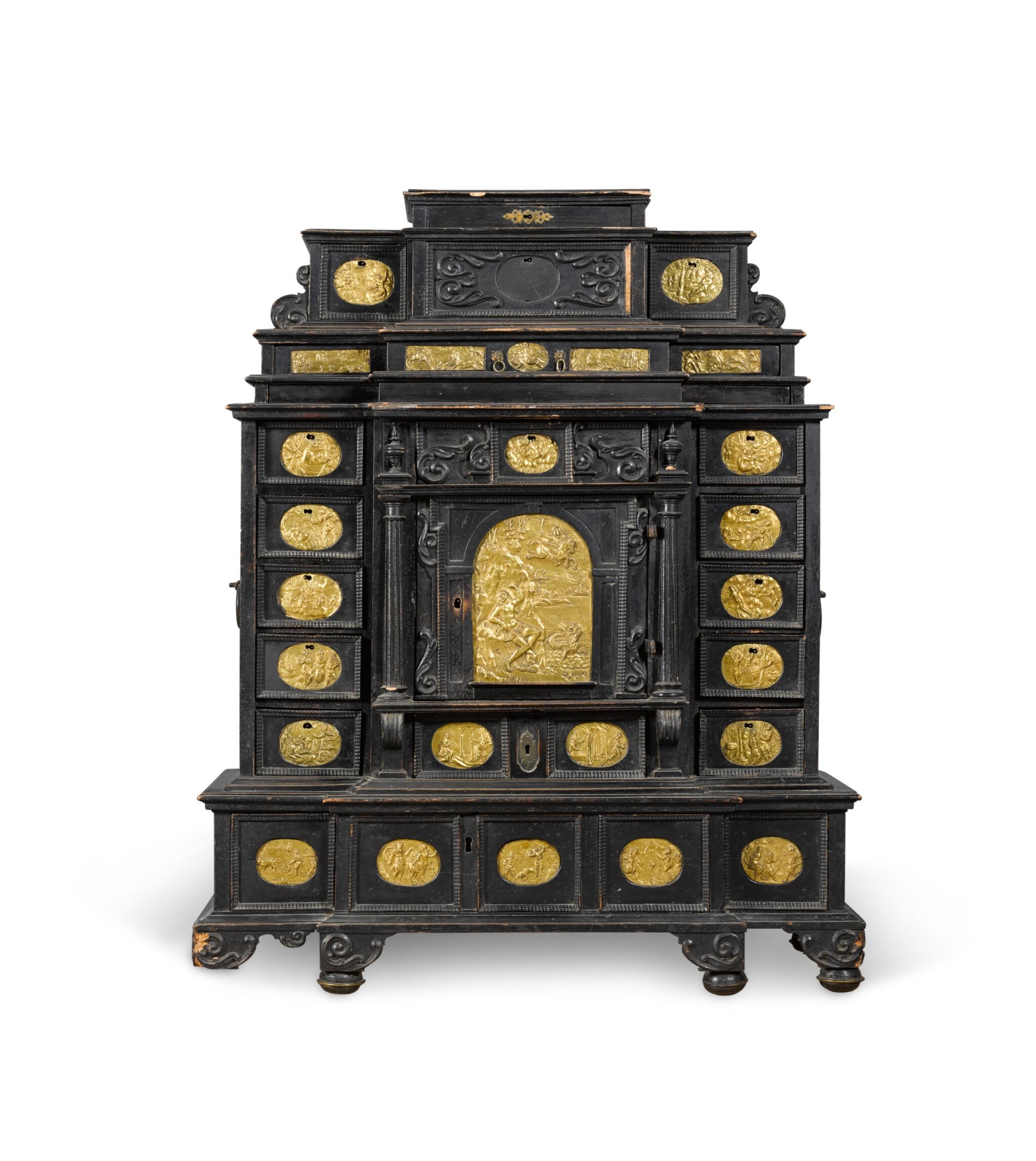 of architectural stepped and breakfront shape, with a central door with a plaque depicting Perseus coming to Andromeda's rescue, the upper frieze drawer double-sided and with four engraved game boards, and with a further quantity of smaller and wider drawers mostly lined with marbleized paper painted with flowers or birds, with some losses and worm damages

In overall reasonable country house condition. The ebonized wood with minor rubbing and some chipping and minor losses to edges, mouldings and corners, all consistent with age and use. Notable small losses are located on the right side towards the top left handside where a piece of moulded edge is missing, another on the left side at the very top along an edge, and one towards the bottom of the front, to a moulding above the missing foot. Some age craquelure and colour fading to the top. Top drawer with a piece of moulding to its right side and the oval plaque missing, as visible in the catalogue image. The lock to the central drawer just above the arch is loose and would benefit from being securely re-attached. The front left handside foot is missing. Both sides missing a rectangular moulding or mount. The plaques are in good condition, with minor scratches and tarnishing as to be expected - the plaque to the far right of the lowest long drawer would benefit from being securely re-attached. Evidence of an old woodworm activity which no longer appears to be active. No key, although some drawers are unlocked.

The striking contrast of the ebonized wood and gilt-metal plaques of the present cabinet are typical features of South German table cabinets executed in the 17th century, for example, in the workshops of Melchior Baumgartner, Boas Ulrich and Matthias Walbaum based in Augsburg.

This type of precious cabinets were not only prized by the German Courts, but also across Europe. Often made of costly exotic materials, such as ebony, tortoiseshell and ivory, and sometimes containing a collection of treasures, they were admired and cherished, especially in a collector’s cabinet of curiosities. In addition, their rich surfaces underlined the wealth, power and status of their owner.

Comparable cabinets by Baumgartner and his workshop are in the collections of the Metropolitan Museum of Art, New York (acc. no. 03.18) and at the Victoria & Albert Museum, London (acc. no. W.60-1923). Examples of Walbaum extravagant works can be seen in the British Museum (inv. no. WB.218) and the Grünes Gewölbe, Dresden (inv. no. I 38), although his most important work, is the exterior of the famous Pommersche Kunstschrank, a sumptuous art cabinet designed by Hainhofer for the Duke Philipp of Pomerania, which was mostly destroyed during World War II.