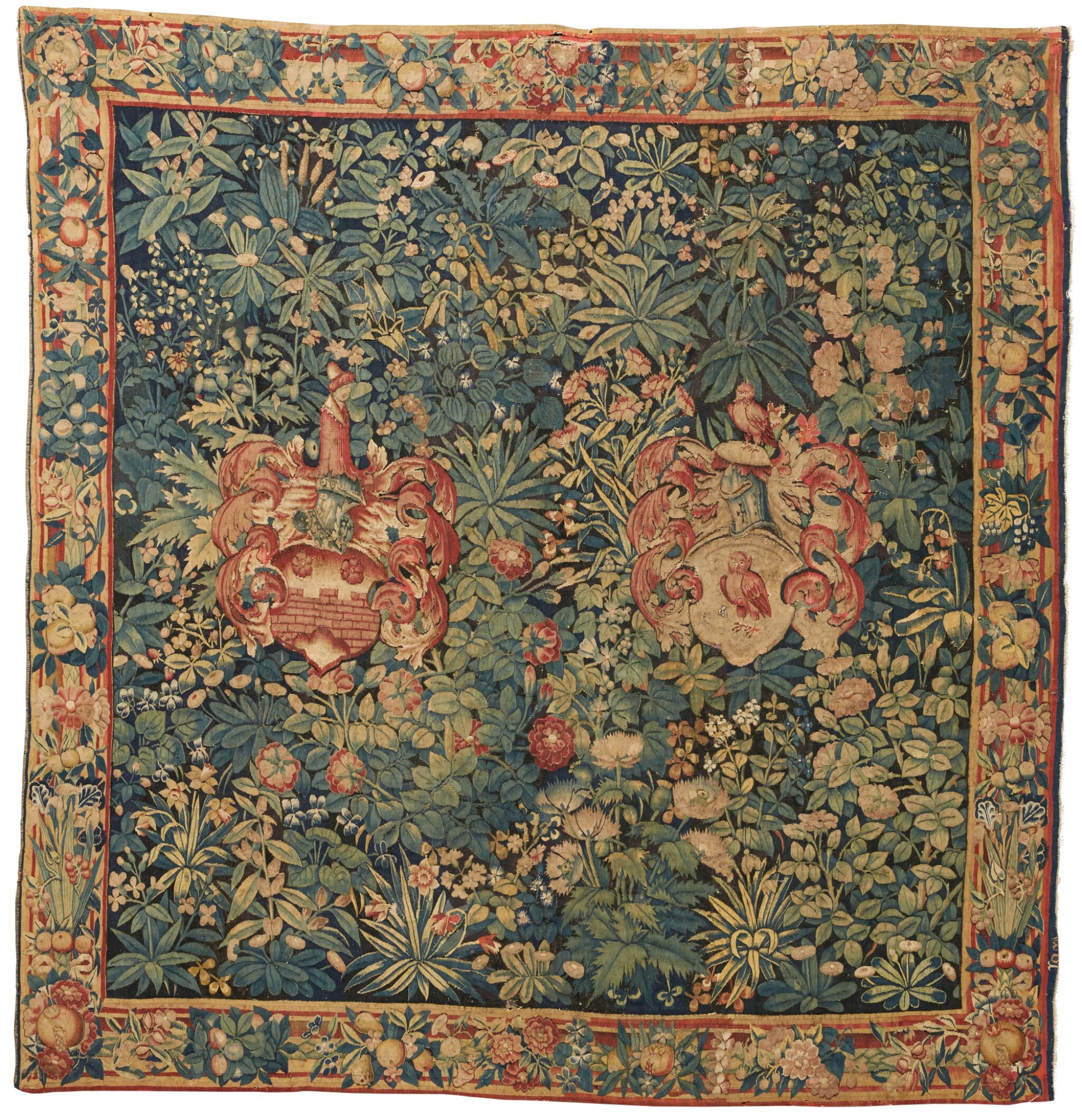 Woven with two Augsburg family armorials, the coat-of-arms of Rosenberg on the left and those of Von Hoerwart on the right (who later received an enriched armorial in 1555), the flanking armorials floating against an exuberant millefleurs design with indigo ground, within a four-sided flowering and fruiting border with distinctive small ribbon tied floral wreaths in each corner, with further orange and yellow banded narrow inner and outer borders, the right hand side horizontal blue selvedge with the woven unidentified weaver's mark, YOM

Tapestry is in need of some attention, as there are some holes and splits in areas for example top section. Overall in good condition and with good colour overall. Striking tapestry.

The term ‘millefleurs’ (thousand flowers) is the term designated to a group of tapestries from the early 15th century through to the mid 16th century, with the characteristic background of flowering plants, against a plain ground, often dark blue, which were previously referred to as ‘verdure’ tapestries. They can include birds and animals, figural groups, including Biblical scenes, and heraldic devices. Inspired by the taste of the European courts for millefleurs tapestries, the aristocracy, church and wealthy middle classes of the 16th century were acquiring this millefleurs verdure genre of tapestries, as opposed to the more expensive classical narrative tapestries, which entailed having expensive cartoons. ‘Verdures’ were the staple output of many of the weaving centres in the 16th century. The earlier millefleurs tapestries revealed the floral compositions as a uniform plane with large floral groups and little overlapping of plants, as depicted with the later also rather more fanciful, large leaf verdure tapestries of the second half of the 16th century. The composition of the present tapestry shows realistic and identifiable flowering plants very close together with some overlap, and of slightly exaggerated scale. The botanical realism of these tapestries was inspired by the growing interest in the natural world encouraged by extended travel and discoveries, especially of the New World in the 16th century.

The tradition for armorial tapestries with the coat of arms or devices floating against a millefleurs verdure ground has a distinguished tradition. The most notable dating from 1466 in the late medieval Burgundian court, when Philip the Good, Duke of Burgundy, commissioned a superb set of eight enormous armorial verdure tapestries, including metal thread (Bernisches Historisches Museum, Bern), from Jan de Haze (native of Lille, with workshop in Brussels), and recorded as having forty recognisable species. The Habsburgs continued with the tradition of collecting tapestries and those with armorials, when they succeeded the dukes of Burgundy and ruled the Netherlands, from 1477 with Maximilian I (1459-1519), then his daughter Margaret of Austria (1480-1530), and his grandson Charles V (1500-1558), who became the Holy Roman Emperor and Archduke of Austria (1519-1556), the King of Spain (1516-1556) and Lord of the Netherlands as titular Duke of Burgundy (1506-1555). They had great influence on tapestry commissions from Flanders across Europe. There is an historically important and interesting comparable series of verdure tapestries, which would have wrapped around the walls for ceremonial effect and are all woven with the coat of arms against a ground of large flowering plants, and similar border type to the present tapestry, albeit with fruit against the palm tree central stem. It is a set of Flemish Armorial tapestries, Brussels, circa 1540-1555, woven with the coat of arms of Emperor Charles V, by the most famous Brussels manufacturer, Willem de Pannemaker, in the Kunsthistorisches Museum, Vienna. The series include panels of various widths, some of square format with a single central coat of arms, and others of wider proportions (approx. 473cm wide) with either one of two armorial motifs, separated by the flowering ground. Another from the series, of square format, approx. 200 by 163cm, woven with the Brussels town mark in the selvedge can be found in the Rijksmuseum, Amsterdam (BK-17260-A).

For a very similar approach to the design and weaving style of the armorial to that of the present tapestry, see a weaving of a tapestry, with the arms of Haller Von Hallerstein, Enghien, 1529-1559, approx. 280 by 268cm (Private Collection), with the unidentified marks of two Enghien workshops, in the lower right corner horizontal and vertical selvedges. The arms similarly include red unfurling leaves, blue helmets and birds and figures above as part of the identification of the arms. Although the arms have similarities, the background to this cited weaving is typical of the Enghien large leaf verdure backgrounds, and therefore a different Flemish group of armorial tapestries, but alludes to the importance of the armorial tapestry commission to the various Flemish weaving centres at the time.

Another recorded comparable Flemish armorial tapestry, fragmentary horizontal strip, 1500-1600, woven with similarly detailed millefleurs verdure ground, woven with a coat of arms of similar style, with a helmet and shield surrounded by unfurling leaves, the composition including an elaborate vase with fruit and a small dragon flanking the coat of arms, against the verdure ground, approx. 76 by 266cm (Bacri Freres Collection, French & Co, then Vigo & Charles Sternberg, present location unknown).

For fragments of what was once a very wide tapestry, commissioned by the alderman of the Franc of Bruges and designed for the walls of the court room, in the 16th century, see fragments from a Flemish millefleurs verdure armorial tapestry, circa 1530 (or 1545), Bruges, workshop of Antoon Segon, after designs by Lancelot Blondeel and Willem Hollandere (or Joost Van der Beke), (Bruges, Musees Communaux, Inv. 0.1.XVII). From records it was approximately 68 Flemish ells (107ft), woven with wreaths enclosing the coat of arms of Charles V, along with the collar of the order of the Golden Fleece, and the design incorporated the Flemish lion and the arms of Franc de Bruges. A painting by Gillis (van) Tilborgh (1625? - 1678), entitled ‘Audience sans la chambre du college du Palais du Franc de Bruges’ (Bruges, Salle du Franc de Bruges), depicts a meeting of the court of justice of the Franc in Bruges, and shows paintings on the upper section and the armorial tapestry running along the lower section of the wall on one side of the room.

The present armorial tapestry has a distinctive verdure ground with a variety of large naturalistic flowering plants. For a Flemish tapestry with a very similar composition of large flowering millefleurs ground, with a central wreath enclosing an allegorical group and small shield, and comparable border type, first half 16th century, approx. 200 by 400cm see Sotheby’s, Paris, 19 November 2019, lot 8.

Due to the continued appeal and combinations of motifs and styles and influences across the weaving centres it is not always possible to designate a specific place of origin to Medieval millefleurs tapestries, albeit that the category has different groups, they are not always weaving centre, let alone workshop specific. Millefleurs tapestries were woven in Brussels, Bruges, Enghien, Tournai, in other Southern Netherlands centres and in France. Some compositional types are related to a particular area more than others, which includes those from Bruges in the early 16th century. Some have town marks and weaver’s marks, or vestiges of marks in the selvedges, but not all are identifiable or recorded. Heraldic tapestries are recorded as having been a speciality of the Enghien weavers. In the second half of sixteenth century, Enghien weaving was at a peak of prowess and was comparable in quality to the weavings from Brussels. With the Imperial Edict in 1544, the production centres were obliged to have a town mark woven into the selvedges. The vestiges of the mark on the outer selvedge of the present tapestry, are likely to be the weaver’s mark. The Bruges weavings of millefleurs armorial tapestries, are distinctive, with the coat of arms enclosed in floral wreaths evenly placed floating across width of tapestry, sometimes alternating with palm trees, all against a millefleurs ground of small flowering plants, of different styles and levels of stylisation. Not all those considered to be of the style will have been woven in Bruges. For an example see a millefleurs armorial tapestry, Southern Netherlands, circa 1510, woven with three wreath medallions enclosing unidentified coat of arms, against small floral millefleurs and animal background, with indigo ground, approx. 170 by 540cm (Sotheby’s, Paris, 13 November 2018, lot 2).

For tapestries with similar border types to the present tapestry see a Flemish armorial large leaf verdure tapestry, late 16th century, with the coat of arms of the Families of Ubaldini, Florence in the corners of the borders, approx. 265 by 321cm (Sotheby’s, London, 13 April 2011, lot 7). For other examples of Renaissance classical tapestries with comparable fruiting and banded border types, see a panel from The Life of Tobias, after the Master of the Prodigal Son, circa 1540, approx. 433 by 452cm (Castle Museum, Gaasbeek), and an inspirational border type with distinctive use of fruit surrounded by flowers in the corners, including melons as in the present border type, is present on a panel from an extraordinary series of tapestries depicting the Battle of Pavia, Brussels, Dermoyen Workshop, after Bernard van Orley, 1525-1531 (Museo di Capodimonte, Naples). Another comparable border, without the central palm stem, is found on a tapestry of The Division of the Flocks, from series The Life of Jacob, Brussels, workshop of Willem de Kempeneer, after Bernard van Orley, 1528-1534, approx. 430 by 610cm (Royal Museum of Art and History, Brussels).

Tapestries depicting the range of variety for designs for tapestries with family coat of arms, from the late 15th through to the late 16th century:

A Millefleurs tapestry fragment, with a lady’s coat of arms, Flemish, late 15th/early 16th century, approx. 115 by 111cm (Museum of Fine Arts, Boston, Acc.No.52.478), section from a once larger hanging, woven depicting a lozenge with unidentified coat of arms, against a ground of overall design of entwined scrolling branches with red and white roses, and other flowers, against an indigo, incorporating ribbon tied initials.

Ebeltje Hartkamp-Jonxis and Hillie Smith, European Tapestries in the Rijksmuseum, Amsterdam, 2004, pp.75-79, cat. 21a & b, discussses and illustrates two Verdure tapestries with the Arms of Emperor Charles V, woven in Brussels, by Willem de Pannemaker, circa 1540-155.