Property from a Private Collection, Switzerland 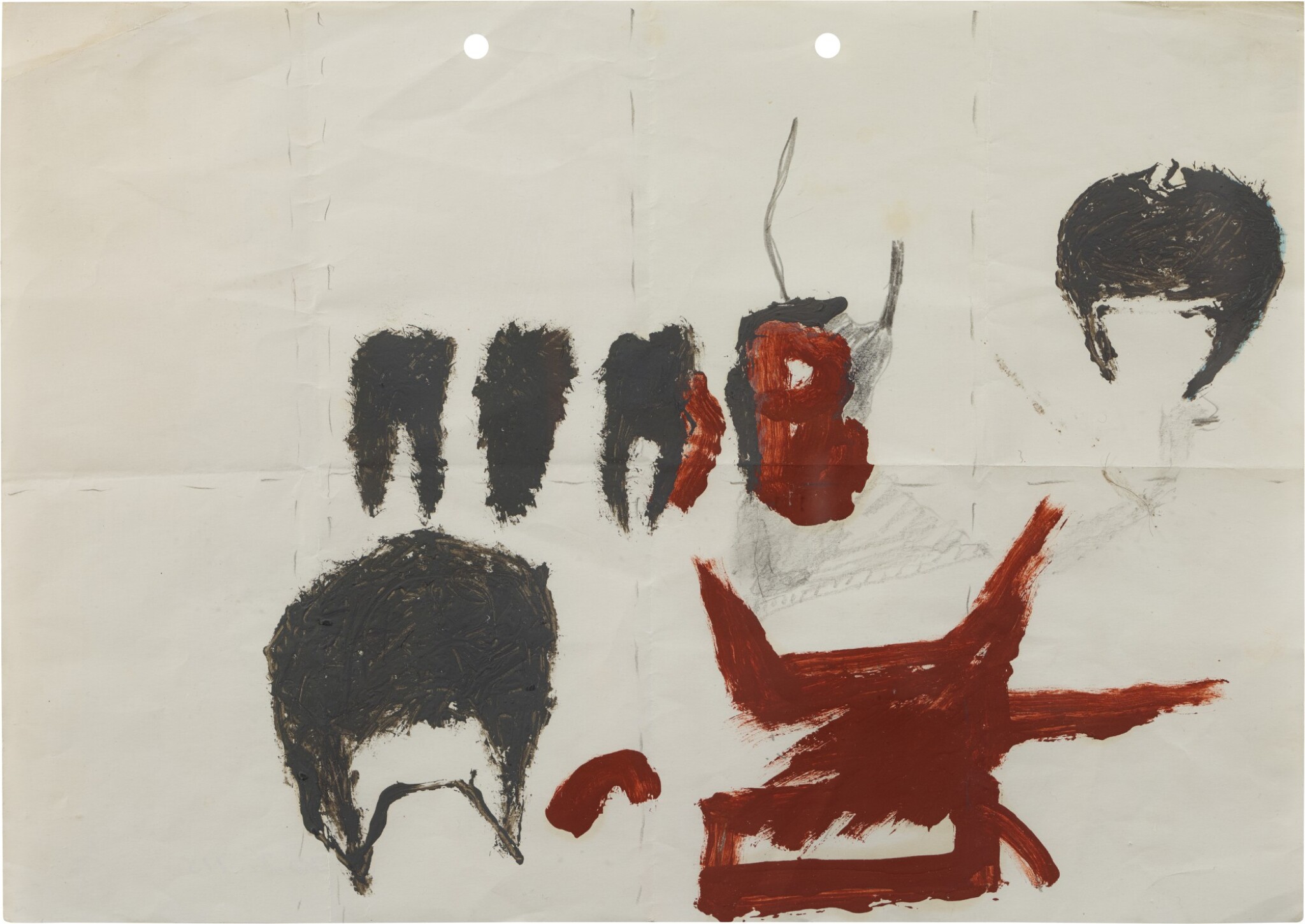 Property from a Private Collection, Switzerland

signed, titled and dated 57/58 on the reverse

pencil and Braunkreuz on paper

This work is in very good condition. Executed on cream laid notebook paper with two punch-holes on the upper edge. Hinged to the mount on the right and left upper corners. There is one horizontal and three vertical folds, coherent to the artist’s process. There is a crease in the upper left corner (approx. 5cm), there are some smaller creases in the upper right corner associated with a minor tear (approx. 0.1cm) and some nicks and a stronger crease in the upper left quadrant. There are creases throughout the composition, coherent with the artist’s process. The sheet is slightly discoloured along the edges on the upper left and right corner, possibly due to handling. There are small number of spots of foxing. There are stains in the center of the upper right quadrant, possibly coherent with the artists process.

Private Collection, Germany (acquired from the above)

2021 marks the celebration of what would have been the 100th birthday of the Rhineland-born artist Joseph Beuys (born in 1921 in Krefeld, raised in Kleve, died 1986 in Düsseldorf). He is widely considered as one of the most significant artists of the 20th century. He altered the language, tasks, nature, materiality and boundaries of art. In his universal practice Beuys explored humanism, social philosophy, anthropology and politics. Taking himself, the World War II soldier as a model for inner transformation, he was after democratizing not only himself but Western culture at large, believing that the key lies in the creativity innate in all human beings with his famous guiding principle: "Everyone is an artist."

Today Beuys is best remembered for his large-scale works, for example, 7000 Oaks (1982): the planting of thousands of trees, each of them with a basalt stone placed alongside, around Kassel, to tie in with the Documenta 7 exhibition, in which the artist used to propagate his need for "Stadtverwaldung statt Stadtverwaltung," a play of words in German amounting to "urban forestation instead of urban administration". During his life the artist was more known for his performances of which many only exist now in the form of documentation.

One cannot reduce the artist to his action art, forgetting about his drawings, paintings, sculptures and mixed media creations. With about 150.000 drawings, his biggest body of works is maybe the one he is least famous for, but pencil and paper were the first medium that the artist extensively used in his early work period. Beuys’s drawing became eloquent scripts for reuniting elements that modern life had divided: the primitive and the modern, art and science, private thought and public action.

In the present work, Joseph Beuys made use of pencil and a distinctive brown oil paint called Braunkreuz, which translates as brown cross and was used by the artist since the early 1950s. Beuys pencil drawings itself was, like in this work, very delicate and light. By using Braunkreuz, this opaque substance, he lends this delicacy some strong materiality.

Explaining the materials that he uses, the material of drawing and how it extends also into the realm of sculpture Beuys said:

“Very important for me was . . . this so called Braunkreuz, where I was looking for a color which was not at all experienced as a color, which was a substance, a kind of sculptural expression which was a color but was not a color.”

With statements like these and whilst never clarifying of what the substance is made of, Beuys helped to mystify the paint and the works on which he used it.

His works were not only complex, but also his biography was, which was subject to his artistic mind and did not provide much information about the artist himself. Beuys would make up details about his own life to stir up the bureaucracy that is part

and integral of the global art market. This is only one of many examples of Beuys' complexity, making unclear where his self-promotion ended, and the authentic self began. When he died at the age of sixty-five, Beuys was hailed and celebrated as one of the most influential European artists of his century.