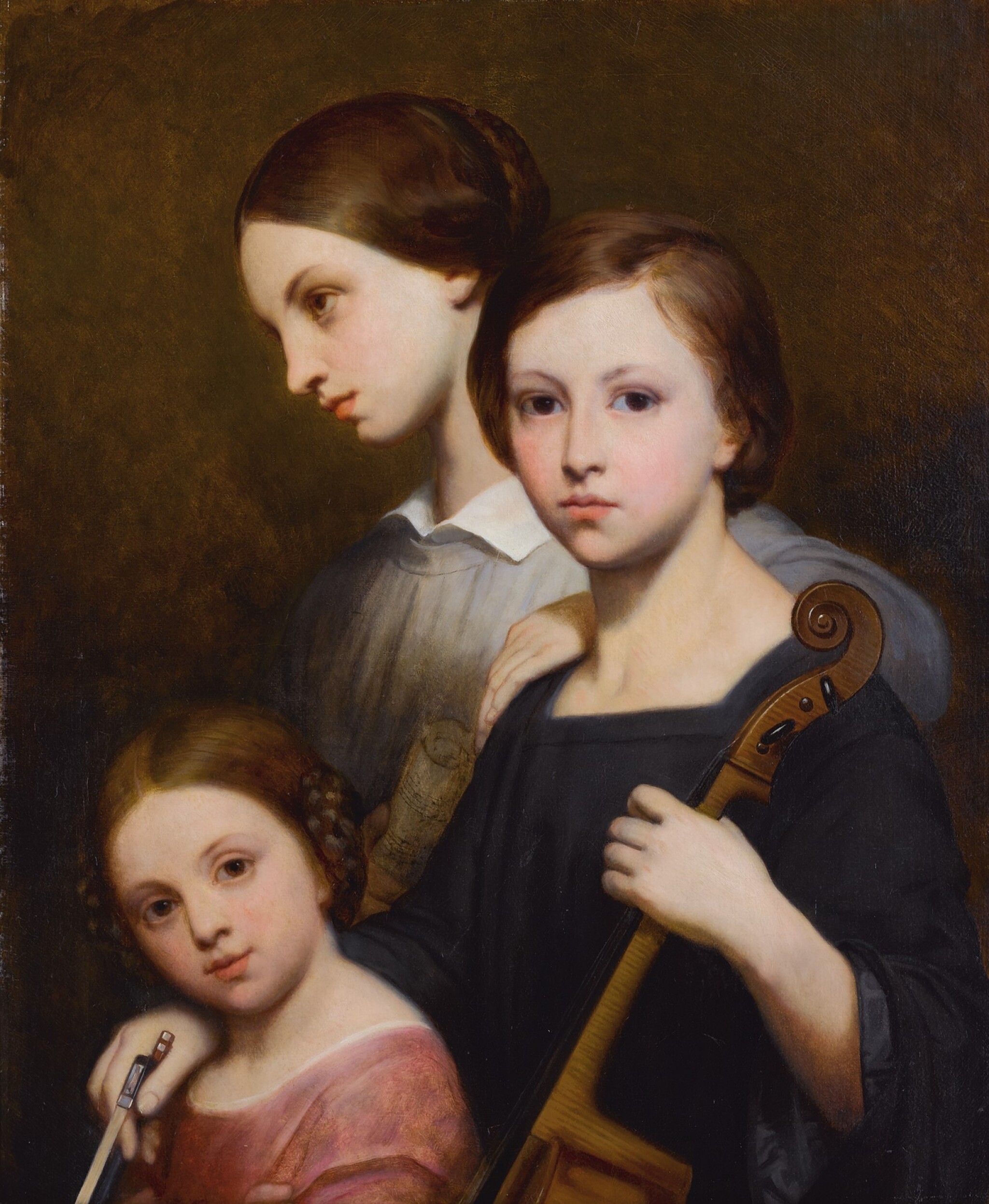 We would like to thank Leo Ewals for providing additional catalogue information.

Lined. Central stretcher bar mark faintly visible as is finely patterned, stable craquelure in select areas of the background. Under UV: Brushy varnish glows green in areas. Thin dashes of inpainting to the eldest girl's cheek, central figure's forehead, costume just below his left hand, and a 1 inch area of repair to his chest, two one inch areas of inpainting to the youngest child's shoulder and brushy, light strengthening in her cheek. A dot of inpainting at upper left edge.

Ary Scheffer was celebrated for his works inspired by literature, religious subjects, as well as captivating portraits of the early nineteenth century’s notable figures. The present group portrait depicts the children of the famous nineteenth century cellist and composer Auguste-Joseph Franchomme (1808-1884): Cécile (1838-1903), René (1841-1860) and Louise (1844-1873). According to a Franchomme descendant the portrait was likely painted circa 1850-1 as a gift from Scheffer to the then-grieving cellist, whose wife died in January 1850 at the young age of 35.

Scheffer was Franchomme’s neighbor and friend, and took an interest in René’s talent, introducing him to members of his circle. As a result, René learned composition under the direction of famed French composer Charles Gounod. In the present work, René is aptly shown holding the “Duport” cello, bought by his father from the son of Jean-Pierre Duport, Napoleon’s favorite cellist, in 1843 for the then-record price of 22,000 francs. At the age of 18, René won first prize playing the “Duport” cello at the Paris Conservatoire, but died tragically several months later of pneumonia.

Built in 1771 by Antonio Stradivari, the “Duport” cello remains one of the most important instruments surviving today, and was played by the legendary cellist Mstislav Rostoropvich from 1974 to 2007. Its visible dent is said to be the result of Napoleon’s rough handling of it when he attempted to play it himself.2 Following Duport’s technique and using his instrument, Franchomme advanced his elegant, light, and smooth bow technique. Franchomme became close friends with Felix Mendelssohn and Frédéric Chopin, with whom he would collaborate.