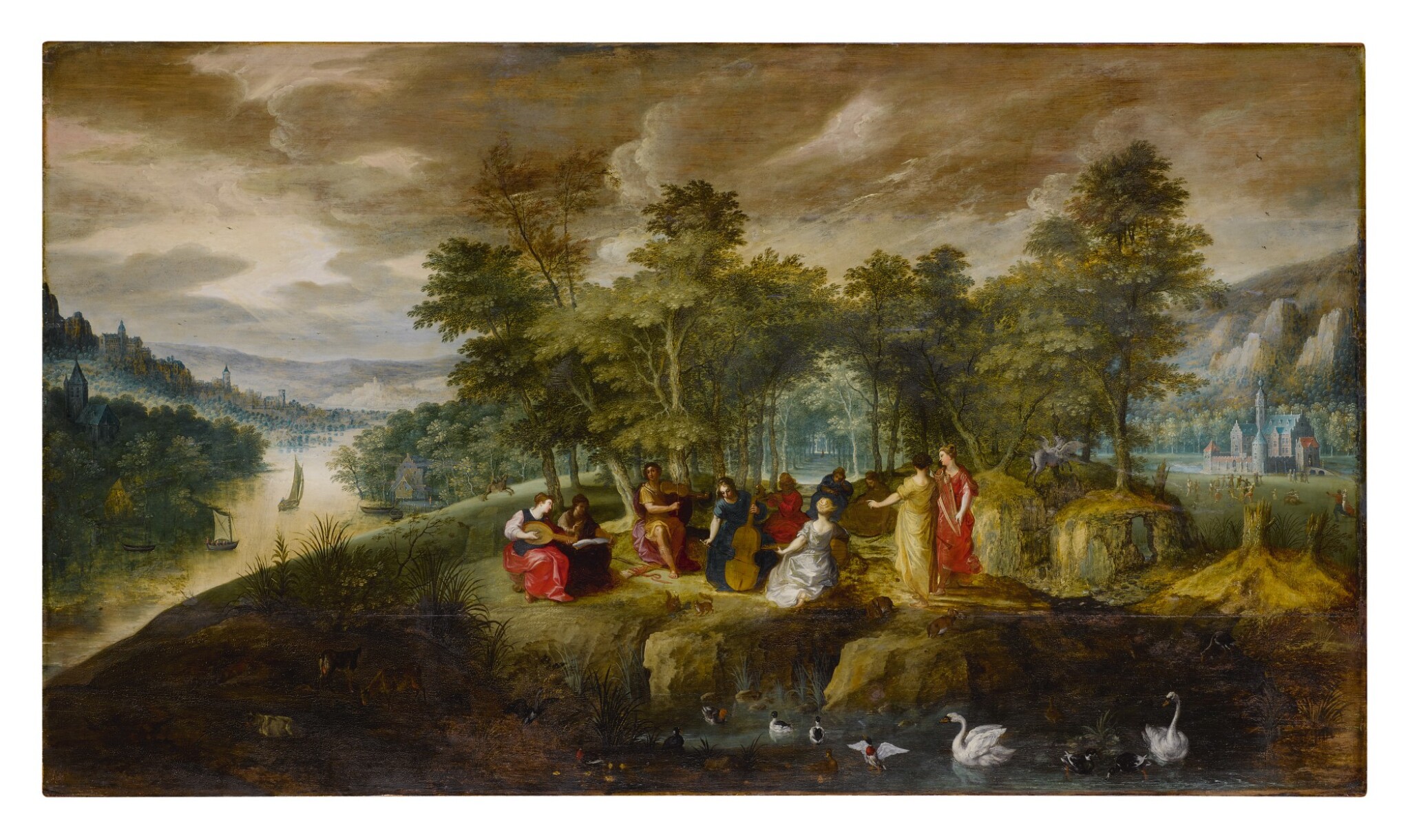 This work is in good condition overall. It has been conservatively restored. It is painted on a large panel which is made from three pieces joined horizontally. The first join runs through the tops of the trees, and the second directly beneath the figure group.

The only concentration of retouching extends from beneath the church in the center of the left side, through the river and into the house on the right bank of the river. There are no retouches in the figure group. There are a few isolated spots of retouching in the landscape between the main group of figures and the castle on the right. There are a few small restored losses in the cliff above the castle on the right. In the sky, there are retouches in a few spots along the original panel join, and in an area near the center of the top edge. In the darkest colors in the foreground, there are a few small cracks that remain unretouched. There is some thinness to the paint layer around the five figures on the right of the central group. The upper portion of the composition is very loosely painted, and the brown panel grain has become quite apparent here.

The varnish has softened, and the retouches could be applied more accurately. Re-examining the restoration would make notable improvements.

In this large and impressive panel, Apollo has gathered with his nine muses on a rocky plateau at the center of the composition, situated between a river valley and a meadow. An elegant allée of trees behind them leads the viewer's eye beyond them in the distance, while Pegasus is seen on a rock to the right. A group of people dance in a meadow in the distance at right while swans and ducks enliven the foreground.

The lively and complex scene comes from the circle of two of the leading artists in Antwerp in the first quarter of the seventeenth century: Jan Brueghel the Elder and Hendrick van Balen the Elder. The two artists first collaborated circa 1600, and each painter’s contribution to their collaborative works varied; in some pictures, Brueghel contributed the landscape and still lifes, while Van Balen designed the figures, but in others, Van Balen determined the composition as a whole and Brughel added smaller natural details later.

Jan Brueghel the Elder trained with his maternal grandmother and developed a remarkably versatile career, earning international renown for his atmospheric landscapes, detailed flower still lifes, and intricate history and genre scenes, often on a small scale. After traveling to Italy and working under the patronage of Cardinals Ascanio Colonna and Federico Borromeo, he returned to Antwerp. In 1606, Jan was named court painter to the Archdukes of the Netherlands, Albert and Isabella, and retained this title for the remainder of his life. Around this same time, he began to collaborate with cabinet painter Hendrick van Balen on paintings of religious figures such as the Virgin Mary surrounded by flower garlands. Van Balen had also traveled to Italy and resettled in Antwerp, where he worked with Jan and other fellow painters including Peter Paul Rubens and Joos de Momper, and eventually taught Anthony van Dyck and Frans Snyders in his workshop.

Such partnerships were common during this period and allowed artists to contribute their own specialty to a variety of projects and commissions. Indeed it has even been suggested that there could have been a third artist involved in the production of the present work, given the vast amount of detail and distinct hands in the staffage, foreground animals, and landscape elements. A painting of Minerva visiting the Muses in the Royal Fine Arts Museum in Antwerp, which has a similar landscape type and clouded sky with a figural group, has been attributed to Hendrick van Balen the Elder, Jan Brueghel the Elder, and Joos de Momper the Younger.1 Both Brueghel and van Balen had talented followers and active workshops; it is likely the hands that collaborated on this panel worked closely in their circles, though exact identification of the artists involved remains elusive.